I Cannot Tell A Lie, The Order of the Forge Needs Something More…

The Order of the Forge #1 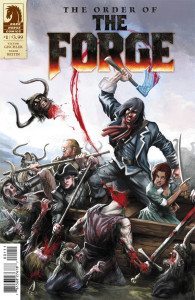 Twenty years before the Sons of Liberty filled the Boston Harbor full of tea, The Order of the Forge takes its own liberties with George Washington. Depicted as a young man in Virginia in 1753, George Washington is shown – gasp – lying to his father about his earlier whereabouts and receiving quite the lecture for it.

In a foul-mouthed fit of anger, he chops down the infamous cherry tree in retaliation. As he completes the job, he accidentally loses control of his axe, flinging it into the woods where it embeds itself into a conveniently placed totem pole that none of the Washingtons have ever seen before? I guess? Something happens to George as he pulls it from the totem and he flees his father’s household.

Six months later, George has made his way to Philadelphia, where he’s still working on crafting his apology to his father – and his letter hints at something, the infamous, ‘I cannot tell a lie’ is there on the parchment. I wonder if the totem pole has something to do with his sudden conscience.

He’s befriended a rebellious Paul Revere and a debauched Benjamin Franklin while working for a man named Hammond. We meet Hammond’s niece, Lady Kate, and she helps to set the mystery with her snooping. She also shows us a rather curt and uninterested Washington – a much different take on the man than what history classes teach.

To round out the issue, there’s another sequence with Washington wielding his axe and a lightning storm that triggers the same something from earlier in the issue to happen again.

I like the idea of this series – injecting a bit of supernatural into the history of the Founding Fathers – but I think it lacks something in execution. A lot of things were jammed into this first issue, but a lot was left out as well. Check out the blurb from Dark Horse:

“I cannot tell a lie. I f**king hate zombies.”—G. Washington

Before he fathered a nation, young George Washington forged his legend in blood! Imbued with the mystical powers of America’s original inhabitants, George—along with his friends Ben Franklin and Paul Revere—must stop an evil governor who wishes to rule an empire!

Where are my zombies, man? Is George Washington a zombie whisperer? Is that what’s up with his whited out eyes twice in the issue? Yeah, that happens twice – not only do things feel rushed, but they somehow still feel repetitive already.

I’m intrigued enough that I want to see what the ‘zombie rules’ are for this historical retelling, but it’s hard to root for Washington out of the first issue – he’s just not all that likeable. In fact, if you took out the famous names in history and just had George, Paul, and Benny in the colonies fighting zombies, I might have liked the story more. Reconciling the actual George Washington with this reimagined one – without most of the supernatural influence to distract me – left me feeling unfulfilled.

There are a lot of historical fiction reimaginings out there lately and The Order of the Forge just hasn’t had the opportunity to hit its stride yet. Here’s hoping the next issue gives us more of the characters to latch onto and zombies. Where are the zombies?!