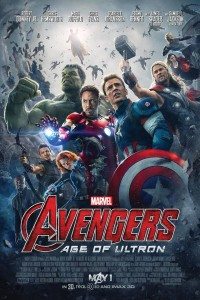 In what could be the most anticipated movie of the summer, Avengers: Age of Ultron does its best to contain its massive cast into a fully formed and interesting story. And for the most part, Joss Whedon succeeds in creating a well-rounded tale about the A.I. named Ultron, created by Tony Stark and Bruce Banner.

Ultron plunges straight into action, as the Avengers find and collect Loki’s staff at a Hydra base in Sokovia. Unfortunately, on the mission Tony Stark manages to get hit by Wanda Maximoff aka Scarlet Witch. The Maximoff twins run literal and figurative circles around the Avengers, but allow them to leave with the staff after Wanda has implanted a terrifying thought into Tony’s head.

His greatest fear in not being able to protect the world is realized in a nightmare as he watches his friends die and his world get invaded. Despite its massive cast and attempts at giving Bruce Banner and Clint Barton more chance to grow, Tony is still given a pretty hefty part of the narrative in the form of his own hubris. Wanda’s manipulation unearths people’s greatest fears as well as their worst traits, and Tony’s has always been his ego. Given time to study Loki’s staff, he comes to the realization that he needs to protect the world from future invaders; essentially put the world into a giant iron suit.

Of course, that is the craziest talk ever coming from a guy who destroyed all of his iron suits in his own movie (though apparently they’re back in the form of the Iron Legion, but more on that later). Roping in Bruce as his partner-in-crime, Tony configures the data from the staff and writes it like programming in an attempt to create artificial intelligence, a project he and Bruce had discussed in the past. Tony’s attempt is successful and it creates Ultron.

Unfortunately seeing what the world has presented and living in the mindset of Tony Stark’s “I must have peace” mentality, turns Ultron into a misanthropic crusader. He reasons that the only way for true peace is the elimination of humanity. James Spader’s Ultron is convincingly believable as well as eerily creepy to watch. His team up with Wanda and Pietro Maximoff brings a great dynamic on the team facing off against the Avengers.

Ultron’s ultimate goal is complete and utter destruction and although Wanda and Pietro have a deep seeded hatred for Tony Stark (as a result of the old days when he was a weapons manufacturer) they do not want genocide. Elizabeth Olsen and Aaron Taylor-Johnson did a good job with their smaller parts of hitting the film during its most crucial points. It would have been interesting to see a little more interaction between the twins and the rest of the Avengers, but they find a mentor within Clint Barton.

In an attempt to find an equal to Ultron’s immeasurable power, Tony and Bruce create another A.I. within a synthetic body, using the data from JARVIS, naming it the Vision. Already causing a large amount of tension within the group, this would be Tony’s second decision made in complete secret from the group, and it manages to piss them all off. Wanda manages to manipulate not only Tony’s mind, but also Bruce, Natasha, Thor, and Steve’s, and the effects of her powers serve as the driving force in what is tearing the Avengers apart.

The nightmares that Wanda brings forward in the Avengers serves as some great character development for each character. Steve sees his past, what he lost and what he’ll never get back, his home and Peggy. Thor sees his friends in hell and after visiting some mystical waters, the ultimate destruction of the universe at the hands of the infinity stones. Bruce undoubtedly sees the Hulk within himself, transforming almost immediately after and rampaging through a city and tearing it apart brutally.

But it was Natasha’s nightmares that ultimately stole the show for me. Getting to see Nat within the Red Room, and hearing about that part of her past has been something the fans have been clamoring for, and getting just a glimpse of it brought the desire for a full fledged Black Widow solo movie.

These nightmares serve as an agitation to each Avenger and manage to almost tear them apart at the sight of the Vision’s creation, but Thor’s intervention silences them as he tells them that the Mind Gem on the Vision’s face is a part of the Infinity Gems and they would be wise to have an ally on their side when more of the shit hits the fan in the future.

After years of voicing JARVIS, Paul Bettany finally steps on stage as the Vision, and he is as ethereal and otherworldly as he is entertaining to watch. He is truly someone who can measure up to Ultron as an equal, and even possesses the worthiness to lift Thor’s hammer. His arrival sews in the threads of the storyline within the Marvel Cinematic universe.

Ultimately the movie arrives at an impossibly intense destructional climax. With Ultron hoping to decimate all life on earth by crashing an entire city onto the earth’s surface. It’s outlandish and comic book-y, but somehow it manages to work as Sokovia is lifted up from the ground and rises into the atmosphere only to come plummeting down at the touch of a button.

Like The Avengers, Ultron was packed with action in the final part of the film. From massive battles against Ultron’s robot army to small one-on-one interactions between characters during combat, the second half can easily be described as explosive. The narrative holds up well enough against the action, but of course, there was a reason why this didn’t earn a five stars in my book.

The film itself suffers from the problem of a massive cast and an overstuffed plot. Bruce Banner, meant to be a main spotlighted character in the movie, was pushed into a romantic arc with Natasha Romanoff that put him in a position to want to leave avenging behind completely and run away with her. Aside from the fact that this romance feels a little forced, it also manages to feel completely unoriginal and contrived. I would have much rather enjoyed a little more time focused on the Maximoffs or Ultron and Vision or even more time on Clint’s family life, versus the extensive time spent on Nat and Bruce staring into each other’s eyes and the Avengers dropping lines like “Natasha likes to flirt”.

Aside from the cringe worthy interview in which Chris Evans and Jeremy Renner called Natasha a slut, the relationship felt like a blindside, given how little we’ve seen these two characters interact. Perhaps a lighter hand, a less direct approach might have won me over, but I could have done without it completely.

And then there’s the backtracking. Bruce Banner went from a man who gained control over his Hulk powers, to someone who needed to be “lullabyed” back into his Bruce form (seriously, was that supposed to be some sort of brainwashing?) Tony Stark’s emotional destruction of all his suits at the end of Iron Man 3 somehow was completely reneged at the beginning of Ultron when he sends in his Iron Legion, a veritable duplicate of his multiple suits that had been destroyed. The pacing and development became stilted when put into the scope of the entire MCU. And given the fact that Age of Ultron is a part of the MCU, it’s definitely something I kept in mind while watching.

And the even more problematic statements given by Joss Whedon regarding the Marvel Cinematic Universe and how it’s actually not all connected. Whedon’s commentary about regretting Coulson’s resurrection in the television show Agents of SHIELD, saying it took away from the effect that Coulson’s death had on the movie, feels hilariously absurd given the fact that Pietro’s death in Age of Ultron feels completely temporary. Not to mention the most recent Agents of SHIELD episode that ends with a massive lead directly into Age of Ultron.

Ultimately, Ultron was something that Joss Whedon has been dreaming about since he took the helm for The Avengers. And it seems he was willing to tell the story at all costs, regardless of faults within the narrative and the universe. Yes, as a movie it was enjoyable, but as a person in love with the MCU as whole and not so much with Whedon’s own hubris, it had moments that felt distinctly out of place.

Final Thoughts: Age of Ultron is a good bookend to Whedon’s directorial status within Marvel, and while the film was fun and enjoyable, it’s definitely time to take the stories in a new direction. The ending brings hope of a new Avengers team assembling, while some of the older members hang up their mantles (at least for now).