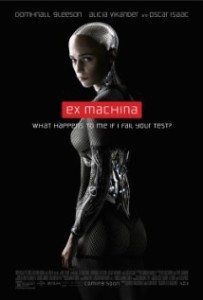 In the upcoming future, a brilliant young coder, Caleb Smith (Domhnall Glesson), working for the world’s most prominent technology company, wins a lottery to spend a week with the company’s eccentric and reclusive CEO, Nathan Bateman (Oscar Isaac). Nathan is so reclusive that Caleb has to take a helicopter ride to an island to god knows where and then hike the rest of the way to a sexy home in the woodside cliffs. Nathan’s house is a modern, glass and steel bunker built into the cliffside with a state of the art security system.

When Caleb meets Nathan it is as awkward as can be. You get this uneasy feeling from Nathan that he could be a serial killer or just a creepy drunkard. He is isolated and I think that it has messed with him, because he’s definitely not all there in the head. We eventually find out what Caleb is actually there for – to participate in a Turing Test. Nathan has been working on an advanced artificial intelligence robot named Ava (Alicia Vikander) and wants Caleb to test if Ava could pass as human on a personality and self-awareness level. This is where the fun begins and the mind bang starts to take off.

Not only is the story of Ex Machina engaging with so many layers and subtleties, it is also shot beautifully. The camera work in Ex Machina should receive just as much praise as the movie itself, props to Rob Hardy the cinematographer. Alex Garland is a master of story telling, his previous works 28 Days Later, Dredd, and Sunshine can vouch for that, and now he has hit the directorial scene with a big splash. With Ex Machina, Garland found the right chemistry between all the characters and didn’t drown you with explanation. He expected the audience to keep up with his quick pace and all of the questions and debates of A.I.

Oscar Isaac’s Nathan commands your attention whenever he is on screen. He is so self-confident that his testosterone just oozes… it helps that he’s practically working out all the damn time, but I rest my case. You know he’s a genius but he doesn’t rub it in your face. He is obsessive with his invention and he goes to very questionable lengths to gather his research and data.

Likewise, as commanding as Isaac is of Nathan, you have Domhnall Gleeson’s Caleb, who is soft-spoken and empathetic. He’s brilliant in his own way and can hold steady conversation with Nathan, but when he interacts with Ava, it’s different. A shy, almost schoolboy interaction that’s fueled by a needing to know if it’s really AI he’s talking to or an actual human being.

Which brings me to Alicia Vikander’s Ava. She is perfect in face and body and the way she is visually presented is amazing. The blending of technology and human flesh is fantastic. Ava has all the knowledge of human kind and yet she is still vulnerable and innocent, fascinated by her human interaction with Caleb. Their moments together are sweet, but something is brewing and that makes you feel uncomfortable.

Final Thoughts: Ex Machina is intelligent, awkward, creepy, and absolutely fantastic to watch. Morals are thrown completely against the wall, like a Jackson Pollack painting. Audiences won’t know what to think or who to cheer for. By the end of the movie, you’re left emotionally drained and all you can do is stare at the screen… that happened. It plays with your mind and you like it. Under the perfect direction of Alex Garland and a wonderfully layered, complex storyline, Ex Machina is a movie you will need to watch again to understand all its hidden agendas. It’s a movie to be discussed and admired for its beauty.