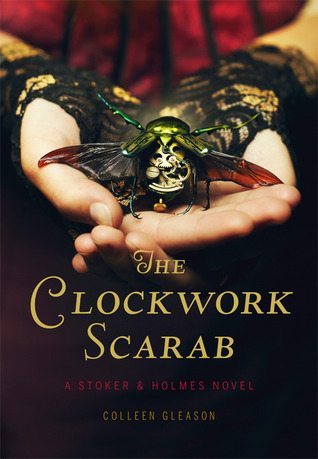 I am in love with the Stoker and Holmes books. I wasn’t expecting this. I’m not much of a steampunk fan and, while the idea of the niece of Sherlock Holmes and the sister of Bram Stoker teaming up to solve mysteries together sounded cool, I wasn’t sure it would keep my attention. I was incredibly wrong about that.

The Clockwork Scarab is the first in the new series and it’s a fantastic introduction. The two girls are brought together by Irene Adler who is working for a member of the royal family. She recruits them to investigate a case involving a series of murders and a strange clockwork, Egyptian scarab. Ultimately they find their victims mixed up with a cult and come face to face with a nemesis known as the Anhk.

The book is told from the alternating perspectives of Mina Holmes and Evaline Stoker. Mina has been trained much in the same way as her father and uncle – she’s an intellectual through and through. Meanwhile, Evaline follows in the family profession as a chosen killer of vampires imbued with enhanced abilities.

For the most part the story is very interesting and it’s certainly fast paced. I love that we have two very capable female protagonists working together to solve this mystery. Each voice is distinct and it’s amusing to see what the two of them think of each other as they go along. It’s equally interesting to see them each coming into their own despite the expectation of women in this particular setting.

Ultimately the story was very satisfying and I love recommending this book to readers.

But the book is not without it’s faults. The most glaring of them? Dylan. Dylan is – to an extent – the third main character. He is discovered at the beginning of the book standing over a body and somehow turns out to be a time traveler from our time. Not our time in their world where the Victorian Era was filled with steampunk contraptions. No, from our time in our world.

He’s actually not a bad character. I like him. A lot, really. But his whole storyline distracts from the book and isn’t really necessary. It’d had been easier if Dylan were just a guy from their time period with progressive ideas. Or an amnesiac from their own time.

Still, Dylan not withstanding, it’s an otherwise really great book and the series promises to only get better. I cannot wait to read the next two books!