Meet the real National Geographic explorers who helped inspire the science in the newest book in the Explorer Academy series, The Star Dunes!

Do you have kids who are starting to get a little stir crazy while doing their very best social distancing? If so, we have the perfect opportunity for you! We’re participating in a blog tour to celebrate the release of the fourth book in Trudi Trueit’s Explorer Academy series, The Star Dunes! This blog tour includes not only an excerpt but an introduction to a real-life explorer (Vincent van der Merwe) and a giveaway.

The kids can learn something educational and you can enter to win the full Explorer Academy series including three tie-in activity books – one of which hasn’t been released yet! That’s a lot of reading and a lot of code-breaking, journaling, and more to keep the kids busy and thinking critically while also having fun. 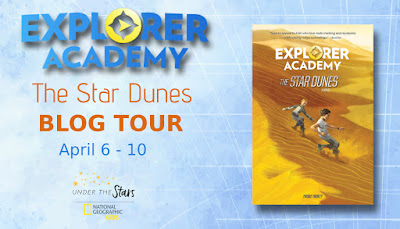 Welcome Back to the Explorer Academy!

Welcome to the Explorer Academy: The Star Dunes Blog Tour!


To celebrate the release of Explorer Academy: The Star Dunes by Trudi Trueit on March 17th, blogs across the web are featuring a National Geographic Explorer who inspired The Explorer Academy, as well as 5 chances to win an Explorer Academy 7-book Prize Pack!

Discover The Truth Behind the Fiction: Meet the real National Geographic explorers who helped inspire the science in the newest book in the Explorer Academy series, The Star Dunes!
Explorers and conservationists are dedicated to protecting the planet and all that’s in it.  That includes the amazing animals featured in the newest book in National Geographic Kids Explorer Academy series, The Star Dunes.  From the largest mountain gorilla to the smallest pangolin, there is one thing the animals in Book Four of Explorer Academy have in common: their homes and lives are in danger, and they rely on the work of real-life National Geographic Explorers to survive. To celebrate the release of The Star Dunes and just in time for Earth Day, each day a participating blog will feature a real National Geographic explorer who is on the forefront of conservation.  And just like Cruz and his fellow recruits, learn from the experts how they use high-tech inventions, local community outreach, medical advancements and investigative journalism to make a difference.

Looking for more Truth Behind the Fiction?  Click here to watch numerous videos of real National Geographic explorers in action — all of who helped inspire the science in the Explorer Academy series  — and find out how they’re changing the world through science and adventure. 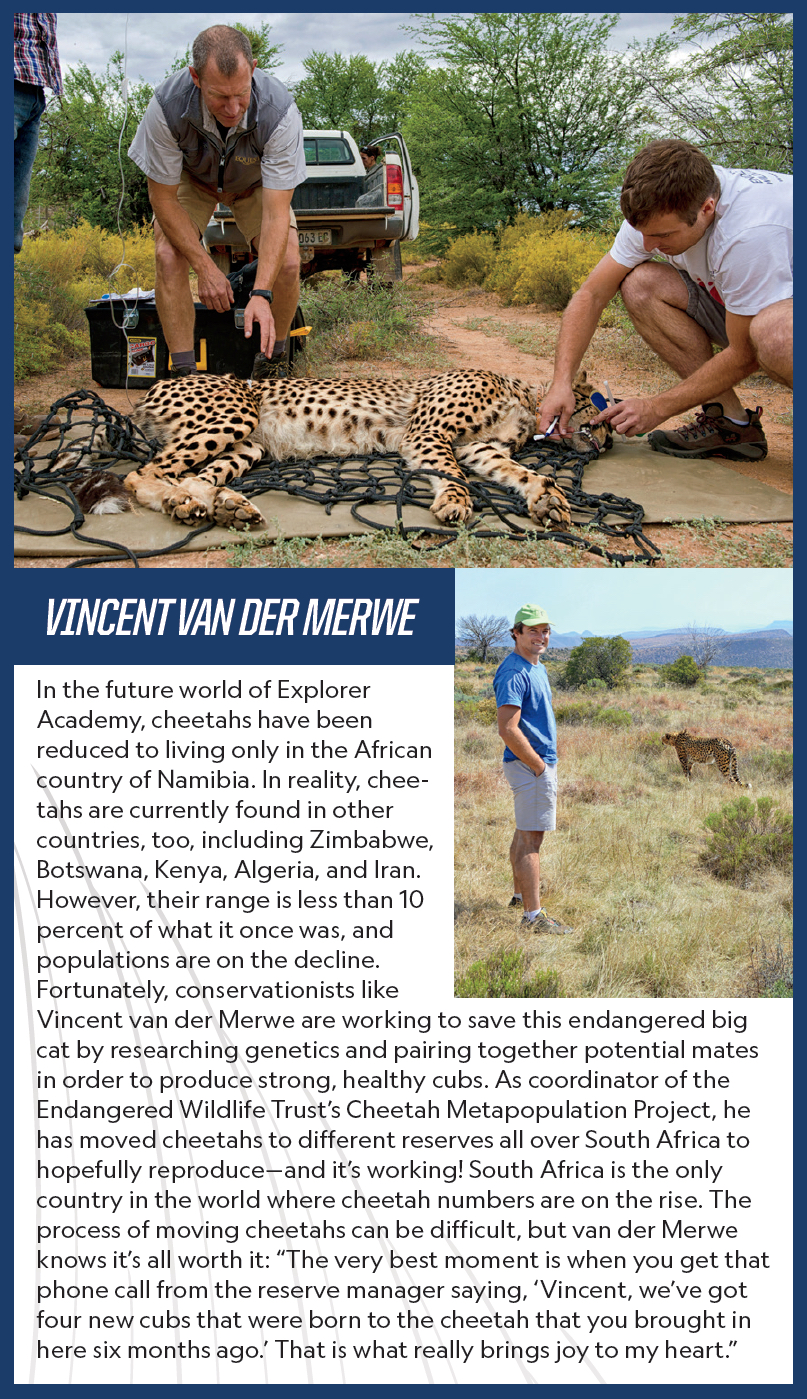 “Inspires the next generation of curious kids to go out into our world and discover something unexpected.”
— James Cameron, National Geographic Explorer-in-Residence and acclaimed filmmaker

“Explorer  Academy  is  sure  to  awaken  readers’  inner  adventurer  and  curiosity  about  the  world  around  them.”
—LeVar  Burton,  host  of  “Reading  Rainbow”and “LeVar  Burton  Reads”

“A fictional setting like the Explorer Academy allows children to forge connections between science in the abstract and practical applications, holding their interest and fostering a love for, ‘all the different things the planet has to offer.”
– Book Riot 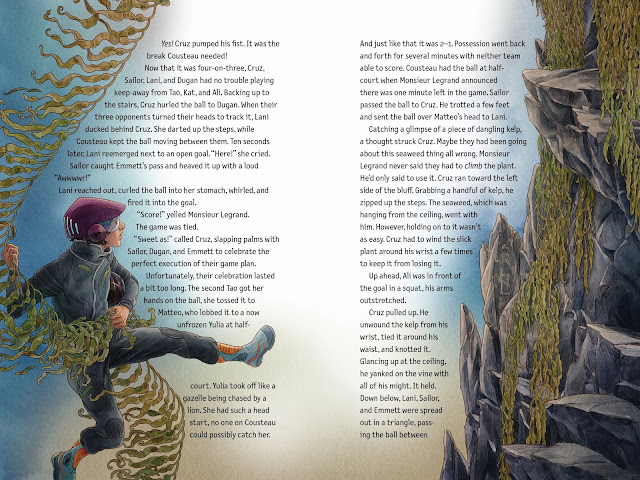 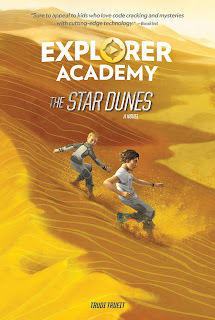 Read the first chapter from The Star Dunes

Adventure, danger, and a thrilling global mission await 12-year-old Cruz Coronado at the Explorer Academy, where he and 23 other kids from around the globe are training to become the next generation of great explorers. But in addition to making new friends and attending cool classes, Cruz must also unlock clues to his family’s mysterious past and tackle the biggest question of all: Who is out to get him … and why? Secrets creep out from the shadows and leave Cruz with more questions than answers in this fourth title in the hit series.

A major discovery forces the Explorer Academy into the limelight in The Star Dunes, but Cruz has much more on his mind than 15 minutes of fame. A new face on board the ship brings Cruz’s worlds colliding, and someone close to Cruz ends up on the brink of death.  En route to Africa to dispense life-saving medications to gorillas, thwart pangolin poachers and capture images of the last known cheetahs in Namibia, Team Cousteau is now down a major player, and Cruz can’t help but be preoccupied by the hole in his life. The discovery of his mom’s next clue leads him to the most exotic location yet–a vast desert–with no other information to lead the way, while an unlikely ally helps Cruz pursue another piece of the puzzle. Just as things seem like they might turn out alright, Dr. Fanchon Quills has a technological breakthrough which gives Cruz a glimpse into the past and reveals more about his future than he may really want to know.

For more adventures with Cruz and his fellow explorers, fans can head to ExplorerAcademy.com to watch the Explorer Academy animated series “Brain Freeze,” play Explorer Academy-inspired games, find the latest updates on The Star Dunes and more. 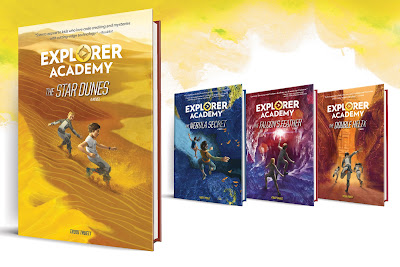 About the Author: Author Trudi Trueit is a gifted storyteller for middle-grade audiences. She has written more than 100 books for young readers, both fiction and nonfiction, including The Sister Solution, Stealing Popular and the Secrets of a Lab Rat series. Trueit lives in Everett, Washington. 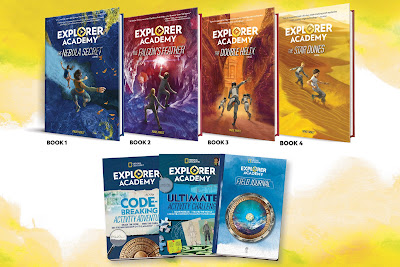