The 100 Book Differs from the TV Series, but is no Less Entertaining! 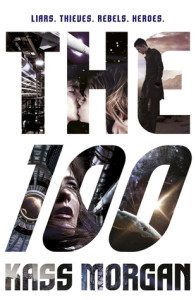 As a first note, this book is not like the tv show. Sure the concept, names, and basic story line are about the same, but that’s where it really ends. If you are a huge fan of the show, it’s probably best you leave this book alone. That being said, if you’ve never see the show, then pick this up! It is a great novel from four view points of a post-apocalyptic world, and what happens to the human race after a few hundred years.

The 100 brings us the story of Clarke, Bellamy, Glass, and Wells. Four kids who have lived their entire lives on the space station that has been orbiting Earth for hundreds of years since a cataclysmic war took place. Thanks to radiation, they haven’t been able to go back until now. To test the waters, the council has decided to send one hundred of the kids who are in confinement down to Earth to see if it is habitable. Three out of four of our main cast make it down, but not without issues.

After landing, the group finds that the world is more beautiful than they could have ever imagined, and that they are not prepared for life on the ground at all. Fighting off starvation, infection, and each other, they have to find a way to  survive. Clarke takes charge of the saving people from death, Wells battles for her and a form of civility among the group, and Bellamy finds his niche in hunting. All goes as well as it can until all hell breaks loose. The group splinters as Clarke and Bellamy set off to find his sister. Wells is left behind to try to bring the group back together and form a society. While he has some success, it’s at a great cost.

Back in space, Glass is dealing with her own problems. The boy she loves is from a different sector, and while she’s been pardoned for her crimes, she cannot risk being seen with him. Nothing can stop true love though, not even a major catastrophe that will end not only their lives, but everyone’s in Walden.

Morgan brings us a more realistic view on how society would work again on Earth, with the fights, feuds, and general mayhem. It’s a refreshing take on the dystopian genre with not everything going right or as planned. This book shows the good of the human population, but also the gritty, mean underbelly of it too. The writing is vivid, fast paced, and never dull. It’s a good weekend novel, and with the two books that come after it, a good series to boot.

Final Thoughts:
I am a fan of the show. It’s great, entertaining, and fast. Saying that, I’m also a fan of the books too. The contrast between how the author viewed the characters versus how the tv writers did is interesting. The storylines are similar, but veer away from each other in ways that are unexpected. If you’re a fan of this genre, this is a good book to add to your collection. I really enjoyed the quick plot and how there are really no dull points in the books. It’s good. Give it a try!