Aquaman Vol 2 A Look at The Others

Aquaman Vol.2 The Others 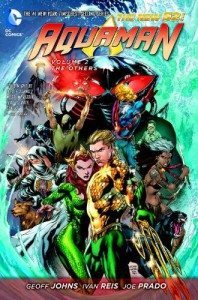 Oh, Arthur Curry, what are we going to do with you?

Apparently give you a kick-ass new back story that shows just how far you have come in the last several years. In The Others we get glimpses of who Aquaman used to be, which is apparently a total jerk. But he wasn’t a jerk who was alone, he worked with a team that called themselves The Others. After a six year separation from the group, Aquaman is forced to look his past in the face, reconcile with who he is, and pull it together long enough to defeat the Black Mantra.

While this is a great premise, there were times I found myself yawning at the whole flash back trope. It’s been used a lot, and just doesn’t feel new anymore. It does give us a lot of information in a short time, which is always a nice thing when trying to understand the “new” Aquaman. In volume two, we find out that six years ago, Arthur’s dad was killed by Black Mantra, and he was out for revenge. While teamed up with The Others, he goes about hunting down Black Mantra.  Let me pause and explain who these others are. The team consisted of Aquaman, The Prisoner, The Seer, Ya’Wara, Vostok, and The Operative. While on a mission together they found Black Mantra and, in a fit of revenge, Aquaman kills Black Mantra’s father. Since then, Black Mantra has been building up to seek revenge, and he intends to get his revenge with some Atlantian artifacts. More specifically a second trident that is much more powerful than Aquaman’s.

It was an interesting story line, and the artwork was beautiful as always. Johns is giving us a new version of what we already have, which is always a nice thing. The story moves along at a good pace, and picks up right where volume one left off. I’m hoping for a bit more discoveries of the artifacts and what they mean in volume three.

Final Thoughts:
Overall, it was a decent second volume in the new Aquaman series. I suppose the only thing I felt that was really missing was more of current Aquaman. Flashbacks are great and all, and they do serve a purpose, but it just seems a bit overused these days. I am looking forward to the third installment and what it may hold!