#HardcoreHenry delivers ultraviolence in first-person form, turning a movie into a video game, even if it’s a paltry video game. 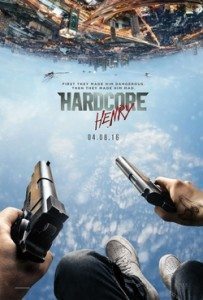 This review contains major spoilers to the plot of this film, proceed with caution.

This week saw the arrival of Hardcore Henry. For those fans of the action drama and fans of ultraviolence and parkour, this will be an easy hit. And no matter what it lacks, it does not lack in action at all. Created by Ilya Naishuller, known for his popular music videos for his band Biting Knee: “The Stampede” and “Bad Motherfucker“, Hardcore Henry is essentially a longer version of these videos with a roughly put together sci-fi plot that doesn’t hit as well as Henry does.

The overwhelming amount of action and violence never gets boring. When moments begin to feel tedious or smothering, the pacing is strong enough to reinvigorate it. The decision to shoot through a GoPro for most of the movie brings the visceral part of the action to the forefront. It looks a lot like a video game, and there’s nothing really wrong with that.

I can’t speak for the action in a technical aspect, but visually, it’s a rollercoaster ride. The action never holds back, it never waits for dramatic pause, and it always goes for the jugular. There’s something really satisfying about ultraviolence within the context of a film. Movies like John Wick and Dredd show that perfectly, and so does Hardcore Henry.

With that being said, the point of view of a first person action movie isn’t always for everyone. Even those who like the genre might be turned off by the frantic jerking of the camera, whether or not it’s accompanied with comedic dialogue and bouncy tunes.

Sharlto Copley pulls out all the comedic stops in Hardcore, taking on wacky new personas and becoming more of a voice for the story than Henry is. In the wake of a mute main character, Copley’s Jimmy is as good of a protagonist as we get. His backstory is only revealed later in the movie, but up until then we have already bonded with Jimmy as a character. He’s more of a lodestone for Henry than his wife Estelle, played by Haley Bennett.

For those looking for a good strong plot to accompany the superb physical side of the film, turn around and go watch a different movie. This might as well be a Biting Knee music video in long form. The plot is about as basic as it can get, with Henry being a genetically and physically modified human/cyborg, fighting against a telekinetic ultra-powerful, ultra-annoying, ultra-asshole poor man’s Julian Assange named Akan, played by Danila Kozlovsky.

To his credit, Kozlovsky is thoroughly convincing as the douchebag Akan. Nothing is quite as annoying to someone who uses his fists to solve every problem as someone who won’t even let you get close enough to use your fists against him. Akan has absolutely no dimension as a character, and plays the basic chaotic evil villain that is there simply for you to hate.

Same could be said for Bennett’s Estelle, who is simply there as an end goal for Henry. Even worse, Estelle eventually turns into the trope of a seductress rather than Henry’s idyllic scientist wife. We don’t even know if she’s the one who actually built Henry or not, though the educated guess is that he was built by Akan or one of his scientists like Jimmy. I was enjoying the action in the movie and the predictable plot, but the turn of Estelle’s character left a bit of a sour taste in my mouth.

Naysayers may reply that “there’s got to be a twist” and “of course, she was going to betray him!” but the trope of the backstabbing woman with no dimension, who becomes the sole owner of the audiences’ resentment is tired and old and misogynist. When the movie is already a barebones plot, you’d think that Naishuller would seize the opportunity to actually create some depth. But Estelle remains the cardboard cutout of general female tropes, from damsel-in-distress to trophy wife to sex symbol to seductress to backstabbing bitch.

And honestly, that’s not even the biggest fault of the movie. The biggest fault is that if you simply silenced this movie and played a track over all of the dialogue, it really wouldn’t make much of a difference. Even with the delivery that Copley offers, and the opportunity to use Tim Roth to his fullest extent, it feels almost sacrilegious to compare it to movies with an actual plot like Dredd and John Wick.

From a directorial standpoint, the first person is definitely something relatively new to experiment with, but with all of the downsides of the movie holding it down, there’s very little a full length GoPro movie can tout. While it looks a lot like a video game, given the narrative format of most modern video games, it can’t even hold a candle to some of the AAA games.

Final Thoughts: It’s undeniably fun to watch for action lovers, but don’t think about Hardcore Henry too much, or else everything else will fall apart.