“The Hobbit: The Battle Of Five Armies” Is Underwhelming 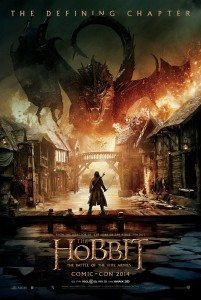 Now I might be in the minority but I really didn’t think The Hobbit should have been split into three 3-hour long movies. It would have been fine as two movies, because everything was drawn out and unnecessarily detailed. There is such thing as too much story. That is why you have movie adaptations written from the book. If you want to explain every gosh darn thing, then well, you have the Hobbit movies.

In The Battle of Five Armies, you are left with Smaug terrorizing Lake Town, and Thorin guarding over his treasure and his right to King of Erabor. Everyone across the land hears about the treasure and how Smaug is dead, so everyone marches to Erabor for their claim on the treasure. It ends with a battle of five armies: dwarves, elves, humans, orcs, and another breed of orc.

Everything about Five Armies was underwhelming. The landscape, the actors, the actresses, the fighting, the cinematography… everything. I didn’t feel moved like I did with the Lord of the Rings movies. Maybe I’m expecting too much, but for such a big budget movie I would think Peter Jackson would care, spoiler, he didn’t.

Now was makes this particular part so bad in the trilogy? It hinges on one fact… the Battle at Lonely Mountain. All the fighting was haphazard, there was no rhyme or reason as to why the battle decisions were made. It was just everyone facing off, then bam let’s fight! There were no tactics, no strategy, no common sense, and it was just all over the place. Big epic battle scenes are always interesting to watch and enjoyable… well here it’s just meh. You see people fighting on the screen and don’t care. There was this one scene in the movie where there was a rally and it felt so fake and contrived.

Martin Freeman who plays Bilbo Baggins gets screen time, but nowhere near as much as the previous two Hobbit movies. He’s pushed to the background and pops up at random intervals. Thorin Oakenshield (Richard Ermitage) is absolutely obsessed with the treasure, getting dragon sickness, and basically is a jackass to everyone until he comes to his senses.

The relationship between Kili (Aidan Turner) and Tauriel (Evangeline Lilly) is probably the only thing worth noting in this movie. Their emotions felt real and their feelings for each other felt true. I think the more epic battle than the five army one was when Elrond (Hugo Weaving), Galadriel (Cate Blanchett), and Saruman (Christopher Lee), fought the 9 wraith kings to save Gandalf (Ian McKellan).

The biggest thing that took you out of the Hobbit world was all the CGI. There was more CGI in this movie than any other LotR or Hobbit movie. It also wasn’t even well done CGI. Everything that was computer generated, looked it. You could tell. There was a constant ethereal glow to everything that just made it look more fake. Honestly, it looked like a fantasy land soap opera.

Remember the last movie and the barrels down the river scene? Remember how they were interlaced with cut scenes from a Go Pro? It cheapened the movie. What made LotR so great was all the practical effects, the wonder and beauty of the place. When you have to act everything on a green screen, it’s pointless. The actor doesn’t feel the majesty of the land, and neither can the audience.

Final Thoughts: The Hobbit should not have been split up into three movies. The Battle of Five Armies would have done great as a 30 minute epic battle scene in the second movie. Instead, it is stretched into a 145 minute long dredge of uninteresting characters and crappy CGI. The entire plot builds up to the battle and it’s a lackluster battle that has no rhyme or reason. People are just fighting for the sake of fighting with no tactical thinking or thought. You don’t feel moved or emotional because there is nothing to be moved about. I really wanted to like The Battle of Five Armies, but it was a lost cause when the title scrolled not he screen.

The Hobbit: The Battle of the Five Armies and The Hobbit, names of the characters, events, items and places therein, are trademarks of The Saul Zaentz Company d/b/a/ Middle-earth Enterprises under license to New Line Productions, Inc. All Rights Reserved.

2 thoughts on ““The Hobbit: The Battle Of Five Armies” Is Underwhelming”