“Big Hero 6” Falters On Creativity, But Is Full of Heart 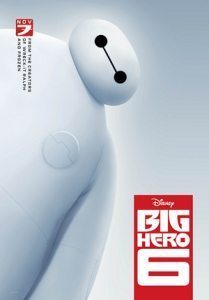 Big Hero 6 is the first animated Disney film based on a Marvel property. By now we’ve grown so used to live-action Marvel films that it’s a bit surprising to see them go into animation at all, but this is exactly what we expected when Disney purchased the company back in 2009. We were worried all our Marvel heroes would get “kiddy” remakes and they’d be toned back to fit Disney’s family-friendly marketing strategy, forgetting that Disney also owns the subsidiary companies that made Pulp Fiction, Minority Report, Lincoln, and plenty of other definitely-adult movies. Now that Disney’s proven they know what they doing with Marvel, they went ahead did exactly what we expected: they made an animated Marvel movie that’s suited pretty much exclusively for kids.

Hiro Hamada (Ryan Potter) is a prodigious young inventor who graduated high school when he was thirteen. At the start of the film, he makes chump money in the illegal botfighting scene, using his age and weak appearance to hustle older fighters. His brother, Tadashi (Daniel Henney), manages to convince Hiro to apply for his prestigious high-tech university, and Hiro invents a nanobot system that wins over the school’s director. But when Tadashi dies in a freak accident, all that remains of Hiro’s brother is Baymax, a fully-functional medical robot that had been Tadashi’s pet project.

Hiro and Baymax realize that someone’s stolen the nanobots and has been using them for malicious purposes, so they elect Tadashi’s group of college friends to help them track the thief. These include Gogo Tomago (Jamie Chung), the tough feminist, Wasabi (Damon Wayans Jr), the conservative nerd, Honey Lemon (Genesis Rodriguez), the quirky girly-girl, and Fred (TJ Miller), the slacker. These side characters all have strong comedic moments, like Fred’s constant bizarre stoner-y ideas and Wasabi’s insistence on stopping at all the red lights during a car chase, but they don’t very much break away from these basic archetypes. The clever jokes run side-by-side with the obvious ones and the four never reveal any depth outside of their initial stereotype. On top of that, the story clearly hits its 3-act-structure hero’s-journey steps with such precision that it feels relatively standard.

Much better characterization comes from Hiro and Baymax. Anyone older than 14 will probably be able to guess the “big twist” early in the movie, but in this case it’s a twist that actually makes the story more interesting. This seems for a while like it’s going to be the extremely common villain story of a corrupt power figure who takes a useful idea and attempts to weaponize it, but it’s Hiro who consistently adds more combative elements to Baymax’s programming as they gear up to hunt down the criminal. Baymax has to deal with the cognitive dissonance between his original purpose of healing and his new violent abilities, while Hiro struggles both to grieve his brother and navigate his rather unusual path through puberty. At the film’s weakest moments, the dialogue can be cliche or overly on-the-nose, but at it’s best, these emotions run deep. Not to mention that Baymax’s robotic personality and half-developed understanding of humans is often hilarious.

Big Hero 6 takes place in San Fransokyo, a futuristic hybrid of San Francisco and Tokyo, which is an idea the movie never really uses to any consequence. Hiro and Tadashi are Japanese, but there’s no reason they couldn’t have been Japanese-Americans living in normal San Francisco; the main villain wears a kabuki mask, but only to disguise his identity for no real reason until the plot sees fit to reveal it. There’s a definite sense that the comic book developed this setting further, but we never see much of it – for instance, in one scene Hiro and Baymax fly above the city and rest among a series of giant floating fans. Why are these fans here? Advertising? Entertainment? Power generation? We never find out. It seems like the film only uses the city hybrid to create a foreign, futuristic setting that American kids could still find relatable.

That being said, many of Big Hero 6‘s best qualities are aesthetic, and that includes the city’s sleek look. The animation looks excellent – I’m continuously amazed by how fluent and detailed modern 3D animation has become, and it’s a nice touch that the Japanese characters show some elements of anime art in their character design. But mostly the film thrives on its action sequences, especially once the full team develops, as the fights demonstrate lots of creative moves and environments without toning down the intensity. These mostly work in a way that middle schoolers in particular will find cool rather than adults – the vaguely developed sci-fi, the forced witty catchphrases, the fun but fairly whimsical superpowers – but it’s great seeing a children’s movie that so clearly demonstrates that science is freaking cool without shoving it down anyone’s throat.

Final Thoughts: Get past some of the inherent bad dialogue and standard-issue plot points of children’s movies and Big Hero 6 provides fun action, powerful emotion, and some great comedic moments. It’s not necessarily worth seeing on your own, but your preteen or younger child will love it and it won’t be a bad time for you either.

Extra Note: In traditional Disney fashion, the film has an animated short called “Feast,” which is creatively told, beautifully animated and edited, and absolutely adorable, perhaps the best part of the movie on its own. And in traditional Marvel fashion, the film also has a coda (after-credits sequence), and it’s not a teaser for a sequel or anything incredible but it’s worth sticking around to see.

2 thoughts on ““Big Hero 6” Falters On Creativity, But Is Full of Heart”