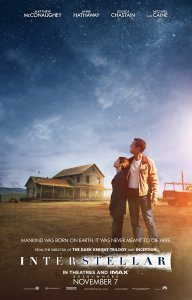 Compared to the space hit of last year, Gravity, Interstellar improves leaps and bounds for me. It reaches farther without relying on visceral sound and spinning, panting Sandra Bullock. Like most films with a heavy scientific tone, I am hesitant to say that anything in this film was accurate, then again the topic being on traveling through wormholes and black holes and fifth dimensions, it’s hard to say there was any science involved at all in the film. But that’s not why you should see this movie.

Often times I struggle when watching a movie as intricate as Interstellar. When a movie clocks in at nearly three hours, a lot of people question whether or not they even want to watch the movie. And as an avid movie goer, I sometimes even have to ask myself that question. But when it’s about a longer movie to finish the story telling correctly, versus a shorter movie that will leave you with empty plot holes, this movie chose to take the road less traveled.

Interstellar is a magnificently beautiful movie. It’s visually gorgeous. From the dusty crops and blighted earth to the kaleidoscopic travel through time-space, cinematically it is a wonder to behold. It’s something that Nolan has always done very well, and if you are a fan of the way he presents a film visually, this is something you will definitely enjoy. In IMAX, the film immerses you almost completely, in one scene I felt my seat vibrating from the sound mixing of an engine taking off, in another I saw the vastness of a planet covered in oceans and mammoth sized waves. It does the best job at giving you the feel of alien and the feel of home.

However, the story, like some of Nolan’s previous projects, is convoluted, and sometimes overcomplicated. It’s never enough to push you on the edge of your seat, always giving you some indication that there is a light at the end of the tunnel, but complicates the story to where you’re jumping around and barely able to make sense of what is going on.

Without going into too much detail, I will tell you that this movie almost lost me a few times. It gets too involved in telling and not showing, tries to oversimplify in an environment that needs no such thing, it revels in monologues about love and feeling from characters we barely know (or care about). The cast is alright, though the only applause I truly have is for Matthew McConaughey and Jessica Chastain. Supporting characters help tell the story and illustrate points, but no one really shined for me.

Anne Hathaway makes a valiant effort as Dr. Brand and almost convinces me a few times, but something feels missing. Michael Cane, who I admit I might be a little sick of seeing play ‘old wise guy’ in a Nolan film, does well, but like I said, falls into the rut of typical old, wise guy. Casey Affleck has about two lines, but would have been more promising if we had seen a little more of him. Matt Damon character, as much as I was hoping would go a different way, went as expected for me, and neither wowed me with his dialogue nor with his character’s purpose.

I won’t say that certain aspects of the film could have been cut out, because I think it needed a lot of the slow story building to live up to the message it was trying to send at the end, but it was a very pedantic film. Sometimes the easiest way to tell a difficult story is to simplify. Personally I think the dialogue and the swelling music was a little too much. It was smothering me with hope one moment, and then threatening to take it away. I was never on the edge of my seat thinking this would end badly. It built too much up, to where the ending was the only thing that would have been viable.

I won’t say it’s a bad movie. It’s not. There were many moments when I felt the full gravitas of emotion Nolan was trying to convey, and it was brilliant. Nolan does a good job on space exploration, pseudo science, and family values, but it’s by no means Shakespeare. Maybe I have been disillusioned by darker pieces, but I stand by my review.

Final Thoughts: It is very, very typical Nolan. If you are a fan of his work, of his writing and direction, it’s something you have to watch. The inherent message of the film brings hope, but it can definitely get waterlogged by intellectual speak and long-winded scenes. Lovers of pseudo-sciencey sci-fi will also enjoy this, I think, as I am one of those people and it was definitely one of the draws back into the plot for me.