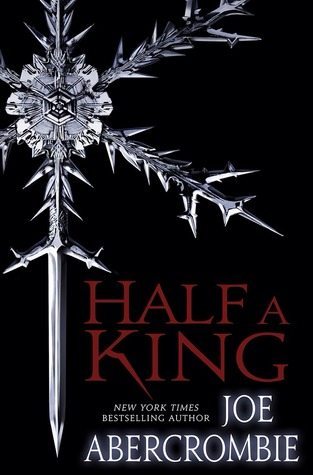 I hear nothing but amazing things about Joe Abercrombie all the time. I mean, all the time. I am slowly trying to work my way into more hardcore fantasy books and the number one recommendation I get is Joe Abercrombie’s The First Law Trilogy. My friends swear by this guy and so when I saw that Half A King was up for review I jumped at the opportunity to read it. I figured that if it’s by the same guy that my friends can’t shut up about it’s got to be good, right?

And I guess it was.

I know, I know. That’s not exactly the greatest recommendation for a book like this but that’s about as much as I can say about it. It was good, I enjoyed it, but over all it didn’t live up to the First Law Trilogy hype. Perhaps it was unfair of me to judge the book on my expectation for other books by the same author but I’m not the only person who has felt this way. I’ve talked to a few other people who have read this on Twitter and Reddit and we all pretty much feel the same. It’s a good book. We liked it well enough. And we’d probably recommend it.

The real problem, I think, is the end. It wasn’t a bad ending. It was actually a pretty great ending for certain characters. But it was pretty lackluster all together.

I point that out because the book itself was a pretty solid fantasy adventure. The main character, Yarvi, is a young man and prince with a disfigured hand who has pretty much avoided any sort of royal responsibility. He’s trained as a priest and planned to abdicate his claim to the throne his entire life, leaving all that ruling stuff to his father and brother. But when they are betrayed and murdered Yarvi must lead his vicious, war-minded people towards revenge.

Except, you know, he gets himself betrayed and presumably murdered as well after which his uncle takes claim to the throne.

Throughout the book Yarvi has to find the will to lead his people but then in the end it doesn’t even matter. That’s my problem with this book. It’s such great character development and there is a lot of build up to him becoming more than he was ever expected to become by anyone.

And then at the end it’s irrelevant.

Now, will Yarvi’s character matter later on? Sure. This is just the first in a series and I have no doubt we’ll see him again. But the character is encumbered by things that will make it difficult for him to move from the life that was chosen for him and that he had previously embraced. So I guess we’ll just have to wait and see how later books progress. The next book Half the World comes out in February.

Final Thoughts:
It was a good enough fantasy read but it might be better to form a first opinion of Joe Abercrombie’s work based on earlier books rather than this one. That said, it’s a promising start to the Shattered Seas series which current is set to be another trilogy. Definitely worth a read if you’re a Joe Abercrombie fan or looking for a good, easy fantasy adventure.