"Alexander and the Terrible, Horrible, No Good, Very Bad Day" Doesn't Quite Thrill

Alexander and the Terrible, Horrible,
No Good, Very Bad Day 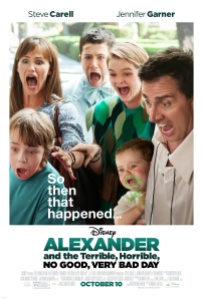 Let me preface this with saying that I am not the target audience for this movie. One of my editors thought it was funny that the title matched up with my sunny personality and we went for it.

The movie is based on a children’s book and though it’s probably very different, the synopsis offers some promise.

Alexander is misfit and misunderstood in his idyllic, suburban family. After another day when everything that can go wrong does go wrong for Alexander, he wishes that his family understood what it was like to have a ‘no good, very bad day.’ He gets his wish, and elaborate hijinks ensue.

Okay, so, doesn’t seem so bad.

That being said, the movie title was painfully accurate.

Let’s be clear. Children’s movies can be fantastic.

Disney and Pixar create family-friendly films with universal storylines that are pleasant for kids and still manage to give the occasional sly nod to their bored parents.

This was not one of those movies.

It was 81 minutes of painful endurance with a few laughs sprinkled throughout.

The characters were all caricatures- the dramatic daughter Emily, the popular older brother Anthony, the baby Trevor (whose sole purpose is to further the appearance of parental negligence), the successful, overworked mom, and the well-intentioned, albeit hapless father.

Anyway, the movie’s title is fairly self-explanatory. Alexander is a middle-school student who feels like no one understands him. The movie updates the children’s book source material by bringing in elements from the digital revolution- Alexander is cyberbullied with the use of an app which puts his face on a bikini model’s body, the most popular kid in school has the same psychopharmocologist as Alexander’s best friend, etc.

In comparison to Alexander, the rest of the family is doing really well- Jennifer Garner is due for a promotion at her publication job, Steve Carell has a job interview at a video game development company, sister Emily is the star in her school’s production of Peter Pan, and Anthony is due to be crowned Duke of Junior Prom.

Cue plot device: Alexander wishes that his family understood what it was like to have a horrible day like his, and he gets his wish.

What follows is the usual mix of unfunny physical comedy from Carell and overacted teenage drama from the child actors.

Emily gets high off cold medicine, botching her performance in the school play. Anthony makes his girlfriend angry and fails his driving test. Mom almost gets fired from a misprint in her latest children’s book launch. Trevor devours a green highlighter. Dad sets himself on fire multiple times in front of Childish Gambino. Some scenes are funnier than others.

Side note: I don’t know how Disney got so many celebrity cameos- we had everyone from Suits and Legally Blonde to Torchwood alums.

Disney also repeatedly references how Jennifer Garner feels like a horrible mom for focusing on her career instead of being with her family, but it never actually furthers any part of the storyline. It was literally repetitive, emotionally manipulative propaganda aimed at women who prioritize their careers over their family lives straight out of the 1950’s.

After trashing the car and torching their lives, everything ends in emotionally dissonant platitudes. Alexander, the 12 year old, does some overexplanatory, pseudo-deep explaining about how we have to have bad days to appreciate the good ones.

Well, this movie did make me appreciate the time I was not spending in the theater, so there’s that.

Final Thoughts:
In typical Disney fashion, all’s well that ends well- and the guys from Thunder from Down Under make an appearance, which almost redeemed the entire movie, and would have if it had an R- rating.