Synopsis: A terrorist knocks out the internet in the southwest United States, and the team investigates the problem.

It’s really hard to take this show seriously every week I watch it. Not only is it filled with semi-serious one liners delivered by Elyse Gabel, but it continues to not only offend me as a “normal person” and offend other self-proclaimed geniuses.

Anyways, we open the episode with the team going on a military test with soldiers. The test is a failure due to Sylvester’s anxiety and ultimately gets them put on hold by Gallo’s boss. Instead of admitting that they really shouldn’t be out in the field, they blame soldiers for smack talking them and delaying them by seconds. Someone should tell this group that improv is essential in the field, and excuses aren’t. 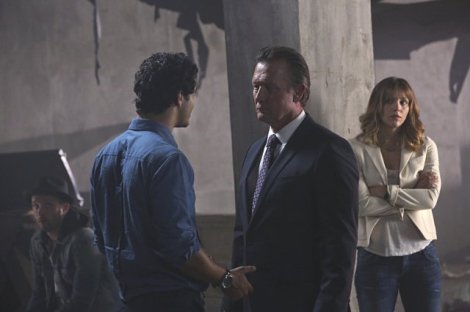 We continue not to really know Paige’s purpose in the group, other than to babysit them? I guess she is suppose to ‘normalize’ them. But so far, that has meant little to nothing in each passing episode.

So the big bad this episode seems to be the big bad for the season, as we meet Agent Thomas Keeler of the shady FSG aka Federal Surveillance Group. Wow, could we really not have just used NSA? But nope, we’ll use FSG. Keeler is introduced after a bombing in a building knocks out the internet in the entire Southwest region of the US.

The team interprets this as an act of terrorism, and despite being grounded by Gallo, they decide to try and track the perp that performed the act. Despite Paige’s protestations, they chase the guy and end up getting him knocked into a coma. As their only witness, they have to go back to the drawing board.

Another bomb goes off with their lack of a lead, but it ends up being what they need. Deductions lead them to a final building that could be a target. They find out that the guy they sent into a coma is actually someone who has been trying to reveal the FSG’s shady dealings, specifically Thomas Keeler’s. Finding this file, they now have to preserve it as Happy finds a bomb in the building that will explode in about 5 minutes. 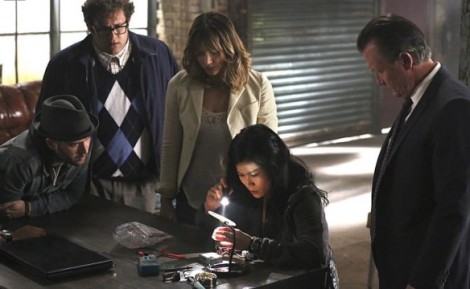 With little time left, instead of trying to get the bomb just like… out of the building, they decide to evacuate and throw the bomb into some putty to lessen the blow. Obviously because crackpot science always works on television, they get everyone out and keep the bomb from destroying the entire building.

Still it leaves no evidence, other than what was seen by Sylvester. I’m sure Homeland Security will take everything he recites to heart as hard evidence. I’m sure there’s no possible problem with this.

The show continues to not impress me. Even with this shadow government agency, I find myself rolling my eyes at every scene. It’s not the plot that is the problem, it’s these horribly mechanic characters that leave little to no room for sympathy.