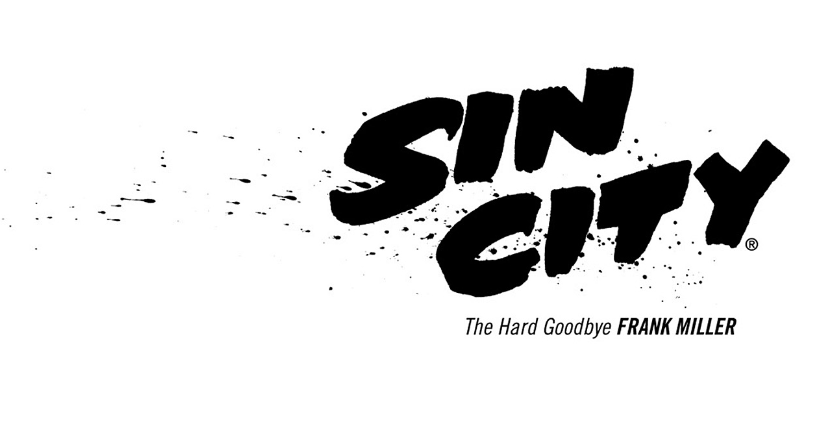 I love the universe of Frank Miller’s Sin City, but I until recently, I’ve never actually read the source material. So after searching out the original seven stories, I decided to do a bit of a reaction post to each of them, as well as take a look at some of the other yarns of the story that were published separately. So, if you have seen the movie and read the comics, you should know that they picked a few stories to feature in the movie. Primarily, The Hard Goodbye, The Yellow Bastard, and The Big Fat Kill, so I’ll be paying extra attention to those copies. 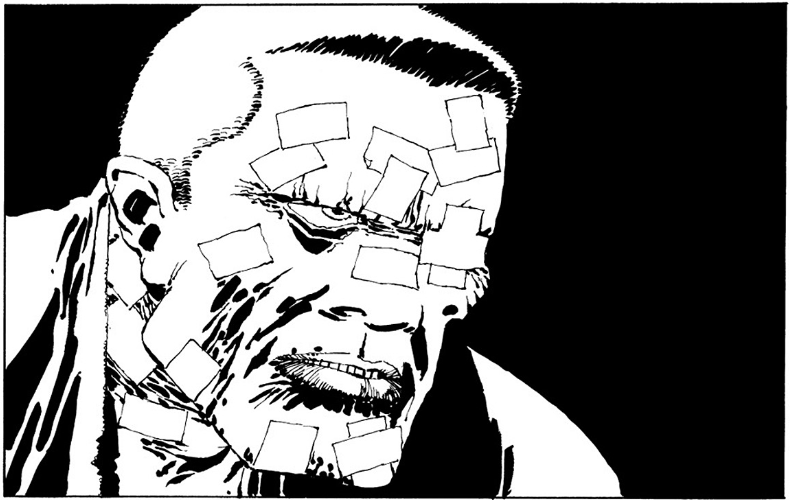 As far as The Hard Goodbye goes, I have to say it is ranked up there as my favorite. Marv is easily one of the best characters Frank Miller ever created. A hulking giant who could tear a man’s skull to pieces and yet still a chivalrous gentleman to the ladies. He’s the protector of the beauties of Sin City and a badass in his own right.

In comparison to the 2005 movie, I’d say the film played very close to the source material, which is something that has been true since I’ve started reading the series. I could recite the lines word for word given how many times I’ve watched the movie. 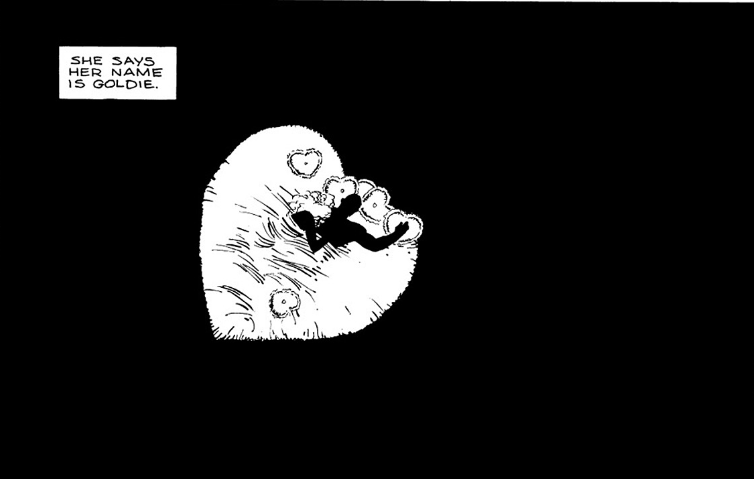 One of the best things I love about Miller’s art is how simple and raw it is. The things this man can complete with a black ink pen and some white paper is just downright absurd. I personally feel that the neo-noir feel we get on the page is translated almost perfectly into film. More perfectly than any other comic book movie out there.

The story is one of pure revenge. Marv spends the night with a prostitute named Goldie, a woman who he suspects is running from someone and chose to stick with the toughest man she could find who could protect her. The beginning of the story starts with Goldie’s death after spending a night with Marv in a crappy hotel room.

Although he only knew her for one night, the death of Goldie hits him hard and he goes on a rampage to go find out who could have snuck in while they were sleeping and killed her. He takes out a pack of police without so much as a loss in breath and goes through Basin City searching for the truth.

Unbeknownst to Marv, he’s being followed by Goldie’s twin sister, Wendy.  Wendy and Goldie are both part of the Old Town girls, the red light district of Basin City, and she is out for blood after finding out her sister is dead and spent her last night with Marv. 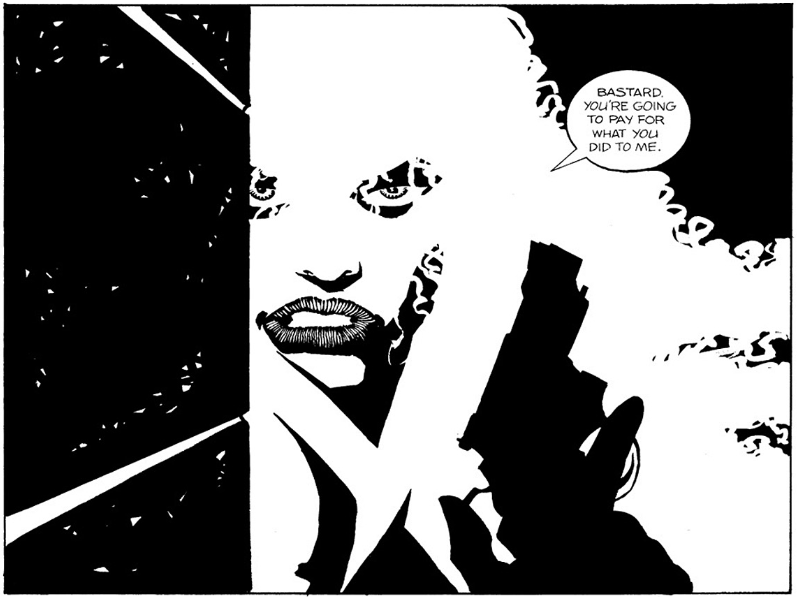 The few glimpses that Marv gets of Wendy has him believing he’s insane, seeing the ghost of the woman he’s revenging. But he continues on, killing his way to the truth while popping some anti-psychotics prescribed by his shrink’s girlfriend. He makes his way to a church where a priest tells him that the order for the kill goes as far up as Cardinal Roark. 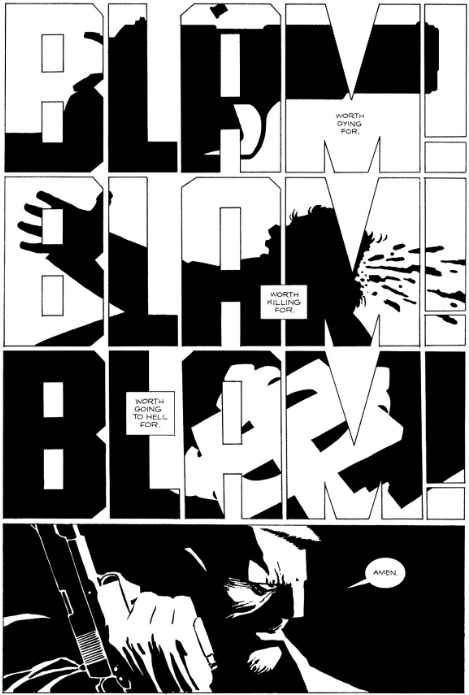 He visits the Roark farm where he finds the killer of Goldie, but gets defeated by the agile killer and put into a cell where he wakes up and finds he is joined by Lucille, his parole officer. The killer has eaten her hand and she reveals that the killer is a cannibal and has not only killed Goldie, but many other prostitutes like her.

As Marv and Lucille escape, they are thwarted by The Painted Cop and his squadron. Although Lucille tries to reason with the cops, she is promptly killed by the cops which turns infuriates Marv. He kills the whole squadron and then “takes his time” with the Painted Cop. 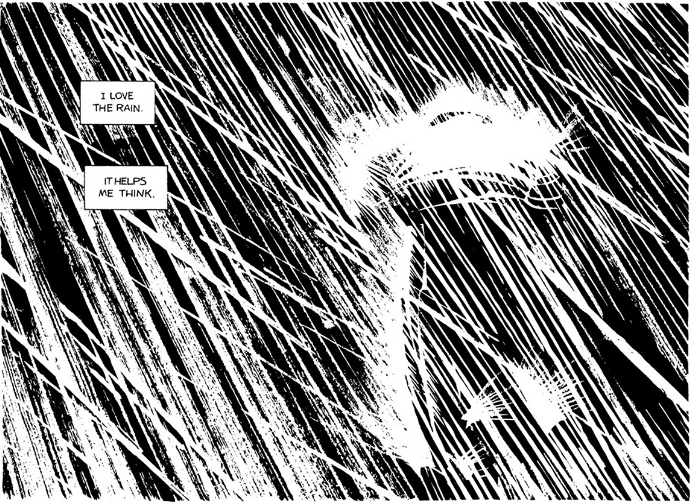 While escaping, Marv questions the entirety of what he has discovered and fears that he may be insane and imagining the entire thing, and that now with Lucille dead he won’t be able to get his medication. Turning up in Old Town he asks around the girls about Goldie, but is suddenly shot by someone.

He wakes up to find himself tied up in a room with Gail, Wendy, and some of the other Old Town girls. He manages to convince the girls he isn’t the killer and slips out of the cuffs that Gail has tied him down in. Freed from the ties, he and Wendy take off after Roark and Kevin.

I am disappointed that they cut out some of the content between Wendy and Marv, because I thought most of it was golden and really gave Marv some more feet to stand on other than just being an obsessive boyfriend or lover. His relationship with Wendy makes me care more about him, although I already love him enough that it’s not that big of a deal for me.

They find Kevin and Wendy is knocked out by Marv, as he goes to do some wetwork on the cannibal. After tying him up, he tortures Kevin before finally letting his own wolf eat the rest of him alive. The scene between Marv and Kevin fighting is one of the best, as is the interrogation scene. It infuriates me as much as it does Marv as how Kevin’s face never changes even during the most horrific parts of his torture.

After Kevin’s unsatisfying murder, Marv decides to take out the Cardinal, who is not only a hero to the city, but a near saint, and as with most political figures in Basin City, he is corrupt. Marv knows that he’s going to his own grave by attacking the cardinal, but this is revenge not only for Goldie, but for Lucille, and the other girls that have become the victim to Kevin and the Cardinal. He leaves Wendy with Nancy and goes off to kill Roark.

Killing Roark is bloody and completely satisfying, up until the police storm in and take him down with machine guns. He wakes up later on the operating table and then goes to jail. They threaten him into signing a confessional to the murder of the girls with his mother’s life and he signs it. After being charged with all of the murders, including the ones committed by Kevin and the Cardinal, he is sentenced to death by the electric chair.

On the night of his sentence, he is visited by his first and only visitor, Wendy. They embrace in a kiss as she tells him that he can call her Goldie. And just to prove how much of a tough badass Marv is, it takes him two shocks to die, and after the first one all he can do is laugh and call them pansies.

I love Marv, and this story was nearly word for word in the movie. The art left nothing more to be desired, as it measured up, if not exceeded, in comparison to moving films.