Death Wish isn’t a bad movie, which is surprising given Roth’s recent batch of flicks, but it is at a bad time. America is in the midst of a crisis on guns and gun violence and a movie that glorifies it is bound to sit poorly. 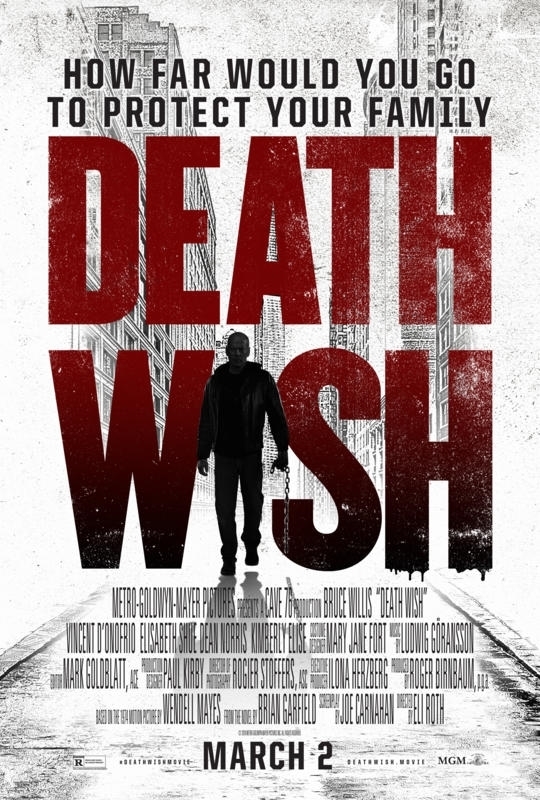 Rating:
Death Wish (2018) is the latest in adaptions of the 1972 novel about violent, unchecked crime and vigilantism. Taking up the pistol as Paul Kersey from Charles Bronson is action icon Bruce Willis under direction from Eli Roth. But how does this one hold up?

There are numerous changes from both the original film and novel, as are bound to be expected. Paul Kersey has changed from architect to surgeon, a man who spends his life at work saving the people of Chicago. When a man gets wild and says some swears at Kersey’s daughter’s soccer game he has some tense words about calming down, he even mouths a swear of his own! Truly he is an unassuming sort.

That all changes when a burglary goes wrong and his wife (played by Elizabeth Shue) is murdered and his daughter put into a coma. Then the quiet man begins to break. With his brother, played by the always wonderful D’Onofrio, he attempts to navigate his new, darker life.

Of course, that means getting his hands on a gun and shooting up a bunch of criminals.

Surprising, at least to me, is Willis’ acting. Because he actually does! I can’t recall the last time I saw him try to be anything other than tough old man but here he makes the attempt, speaking quietly, unassuming, crying at loss. Some of the dialogue given to Willis and Shue are off kilter a bit and delivered in a campy way, others are clunkers. It makes it even stranger that the actors appear to know the quality of flick they are in and lean into it.

The career change to surgeon allows for some convenient plotting which I’m actually in favor of. Dr. Kersey now has access to useful tools for his quest and the know how to stitch himself up when needed, the few times that’s useful. For what he doesn’t know, he watches YouTube and even then he isn’t perfect at everything. Seeing Bruce Willis injure himself firing a gun is not something I ever expected to see in an action movie at this point.

Those of you familiar with Eli Roth’s movies no doubt are excepting a gory, gratuitous flick and honestly, it’s not that bad here. There are a couple of particularly gruesome looking gunshot wounds, generally, they are over quickly. Of course, the camera lingers on a couple, this is Roth after all.

Death Wish isn’t a bad movie, which is surprising given Roth’s recent batch of flicks, but it is at a bad time. America is in the midst of a crisis on guns and gun violence and a movie that glorifies it is bound to sit poorly. The movie seems to be in on this at least at the start, making a bit of a farce about the type of businesses and clientele that are roped into buying an assault rifle, complete with hidden coffee table storage.

Of course, that’s been the case for every Death Wish movie. The novel sees the change towards vigilantism as a more reptilian reaction, Kersey is no hero. When that’s made the transition to film that level is always lost. Maybe film doesn’t have the time to take someone through that full arc of lizard brain instinct back to rational but rather serves that immediate thirst for vengeance perfectly.

All in all, it does some things right, it fulfills the natural bloodlust for vengeance, but exists at a strange time and doesn’t do anything really spectacular making for a take it or leave it experience. Other movies fill this need and do it better.