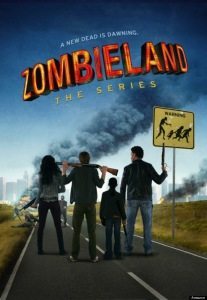 Right, so, let’s talk about Zombieland – the series. We’ve been hearing talk about this thing for a long time now. Ever since Zombieland came out and was basically the best zombie horror film since Shaun of the Dead (and if I’m being honest I like it way more than Shaun of the Dead) people have been waiting for a sequel of some kind. Then the idea of a television show started popping and Walking Dead did so well that it didn’t seem too far-fetched.

But we didn’t really see anything happen with that idea.

Just a few days ago (the same day that Netflix launched Hemlock Grove) Amazon released a series of pilots for prospective upcoming series that they would be pushing into full development. You get to watch the pilots and vote on what you think should be turned into a fullfledged series. One of the pilots was for the Zombieland series. At just about 30 minutes, it’s a quick sort of sitcom wannabe set in the Zombieland world. The characters are all the same but they have been drastically recast. In some cases it seems to be fine. In others… yeah.

Little Rock’s replacement is adorable and quite spunky. Pretty much a great successor to Abigail Breslin in the original role. Wichita wasn’t bad though she looks a lot older than the Columbus replacement who looks like he’s barely eighteen. He’s actually not a bad choice, though, and he’s got the same sort of voice for the narration as Jesse Eisenburg. The big problem is the guy they tapped to replace Woody Harrelson. Kirk Ward is no Tallahassee.

Over all, it’s not a bad pilot, but it just feels cheap. It’s like a cheap knock off of the original Zombieland but for a net series? Maybe that’s okay. If Amazon is going for the sort of webseries look and not the professional look of Netflix’s original series then they are going to probably be able to milk this one for quite a bit of dough without putting a whole lot of effort into it. Because it was funny. It had a decent idea behind it. And the series is promising.

It starts off with actually a freakin’ fantastic scene of two people in a corporate office bitching about their day to day life while in the background outside there are a series of people being attacked by zombies, fighting zombies, etc. It’s our introduction to Tallahassee, who happens to be the sandwich guy who wheels up with his cart right as a zombie comes flying through the window. He beats the shit out of the zombie and walks out into the chaos with a smile on his face. There was no mention of the son he lost, though, so… I guess we’re supposed to forget about that? I feel like a guy who just killed a zombie at work wouldn’t slow walk into the parking lot with a smile on his face when he knew his kid was out there defenseless. Maybe that’s just me, though.

The rest of the series is set after the original movie. Columbus and Wichita have broken up because he’s way too clingy and she doesn’t want to answer his questions about her favorite honeymoon and favorite bottled water. Little Rock is pretty much just as she was in the movie and Tallahassee is, too. Except just lamer because it’s not Woody Harrelson. They blow up a fireworks factory and make a shit ton of noise but somehow that doesn’t attract any zombies. It just makes them sad and makes them miss people.

So they dial up Detroit who is a sassy woman who used to be an OnStar operator to try and help them find a safe place. There’s a group of survivors on the East Coast but since they are in LA they are going to try and pick people up and make their own community. Except every single person they meet up with they some how manage to get killed. Their arrival just completely screws over the other survivors. I mean, it’s funny in a way but it’s also just really sad. Especially since the one lady was a culinary genius and she had been doing just fine on her own. The window washer I have no idea how he was still alive, nor Eugene. But Regina? (Pronounced “like vagina with an errrrr” in case you were wondering.) She was all good.

Ultimately, after a struggle with some zombified grandparents they decide to give up and go for the East Coast. Which is probably for the best. And it sets up the rest of the series as a cross country city hopping bonanza.

All in all, it was funny but the fact that it’s the same characters but not the same actors really distracted me from the episode, I think. I’ll watch it if it gets greenlighted (which I assume it will) and in time I’ll probably get over it. The characters are all written very much the same and I think in time I can even begin to accept the new Tallahassee. You should check it out and vote for it on Amazon. And check out some of the other series, too.

Check it out at this link because for whatever reason there are no trailers up on Youtube. (Poor marketing choice Amazon…)