‘Too Like The Lightning’ is A Rewarding, New Sci-Fi Novel That Imagines An Incredibly Unique Future 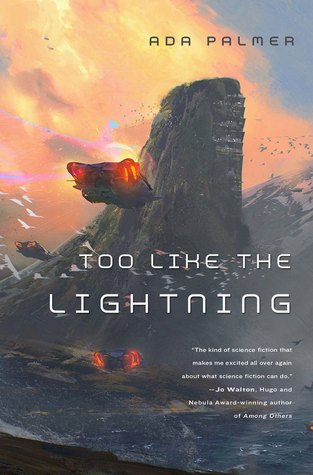 Before I start this review I want to say one thing: this will not be the last you hear of this book. If ever there was a contender for the Best Sci-Fi Book of 2016 its this one. You are going to see Too Like the Lightning on any number of Top 10 lists at the end of this year and I can guarantee it will be a nominee – if not the winner – of this year’s Goodreads Choice Awards in any number of relevant categories.

Only time will tell, of course, but I have faith.

Too Like the Lightning is unlike anything else I’ve ever read. It’s an incredible blend of interwoven stories and characters traversing a very unique, intricately built future. The world building is impeccable. The characters are well-developed and diverse. There’s so much going on at all times that it’s hard not to get entirely enraptured in things.

The world that Palmer creates is absolutely phenomenal and so very different from our own though the influences are obvious. It’s a future where people no longer conform to gender expectations or even use pronouns. It’s a world that no longer has such rigid concepts of nationality and race but more frequently rallies around common viewpoints and ideals. It’s a place where religion is both effectively-outlawed and celebrated to the extent that people may privately maintain their own beliefs with the helpful aid of their designated sensayers.

It really is a fascinating world that she creates.

Now, all that said, I have to admit that it’s a bit of a challenging read. Ada Palmer is considered a debut novelist with the publication of Too Like the Lightning but she is not a first time writer. She is, in fact, a Renaissance scholar – and if you read this book that will completely and totally make sense. The future in which the book takes place is heavily inspired by a sort of movement that sought to embrace classical Renaissance philosophy and classic thinking. To that effect, the book reads a lot more like a novel from the 1700s than from the 2010s.

I was hooked from the very first page.

Took Like the Lightning is written as a memoir of the primary character Mycroft Canner through whom much of the book is experienced and by whom most of the story is told. Throughout the book he is a sort of enigmatic character. He is a servicer – an individual convicted of a crime and sentenced to spend his days roaming the world in the service of others. His crime is said to be terrible but it’s not openly discussed for the majority of the book.

Despite all that, Mycroft is a character who is afforded significant access to those in positions of power. He finds himself wrapped up in a scandal involving the most powerful people and groups (called Hives) on the planet. The story takes on global proportions in a world where near instantaneous travel makes the world a very interconnected, very tiny place. And yet at the same time the book takes a very personal turn, too. Because while all this upheaval may be going on at the global level, the true heart of the book lays in Mycroft’s relationship with one particular family (called a bash) and a young boy named Bridger.

Bridger, by the way, has the incredible power to bring inanimate things to life and make mere images real. Admittedly at time these very different plot points make things complicated. But ultimately Bridger as the kind of power that will change the world as it is known forever. And while the sort of political intrigue going on at some points can be exciting, the moments with Bridger and his adoptive bash are much more intresting. His relationship with his animated toys – the toy soldiers who protect him, the doll that cares for him – and with Mycroft are truly heartwarming (and on occasion heart-wrenching).

The book’s ending leaves you earnestly wanting more and the only real saving grace is that the second book in the duology, The Seven Surrenders, is already slated for release in February of 2017.

I highly recommend this book with one caveat – you have to be ready to work for this one. The pacing is strange at times and the formatting difficult. It’s a very different book than any other you’re likely going to read this year (unless you’re already planning to bust out the classics). It will be worth it, though. I promise!

A review copy of  Too Like The Lightning was provided by the publisher in exchange for a fair and honest review. Nerdophiles was in no way compensated for this review. Our opinions are ours and ours alone.