‘Beatriz at Dinner’ Has a Clashing Point of View and Ending 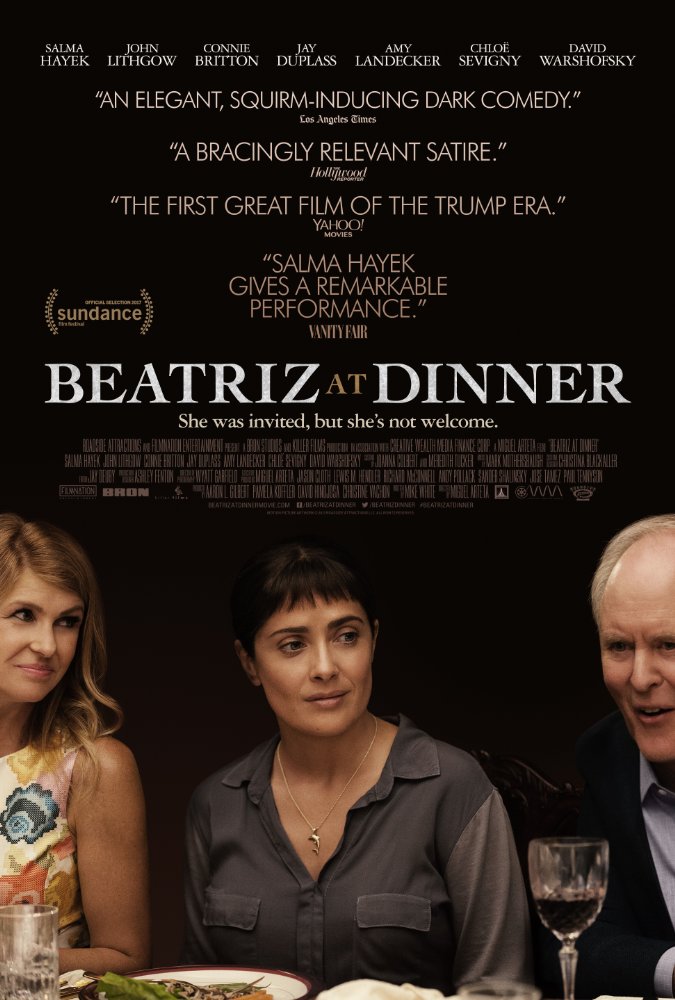 Beatriz at Dinner has been called ‘the first great film of the Trump era.’ But what does that mean? Does that make it a good movie? Let’s get into it.

Starring Salma Hayek, John Lithgow, and Connie Britton, Beatriz at Dinner tells the story of massage therapist Beatriz and her interactions with the friends and family of a client at dinner. Specifically, the butting of heads and ideologies between herself and the family’s business partner played by John Lithgow, a real estate mogul with no regard for the ramifications of his pursuits.

It’s easy to see the parallel, Lithgow’s character represents the Trumps of the world, rich, older, white male leaders of industry. He is the business partner of the family as they plan to break ground on a new development.  Meanwhile, Beatriz is the calm collection of different beliefs, all tied to a deeper love of fellow people. She’s a Buddhist, raises goats, practices New Age type medicine, as well as a massage therapist. Clearly, they are from different worlds.

The movie follows the course of the dinner, as Beatriz listens in on conversation, attempting to reach out and make honest connections while all the guests proceed to humor her, outright ignore her, or confuse her for the help. When the other characters show disregard for their actions, for the poor, or the animals who are affected by their actions, Beatriz attempts to put her perspective in but gains no footing. And so the movie goes, frustrating as Beatriz dreams of returning home, but being stuck in the world of this family and their business partners.

The movie is very good, for the first two-thirds. The relationship between the characters, the conversations, everything is feels true. There is dark comedy, but you recognize the moments of awfulness the characters absent-mindedly, off-handedly perform.

The final act however, the real climactic gesture and final action don’t seem to follow the philosophy presented up to this point. During several moments throughout the film, Beatriz reaches out and seems to almost break through to the other characters, in telling stories of her life, in singing a song in Spanish from her past. Each time these moments occur they seem to reach further and further into the hearts of the others. But it never does.

Instead, there is a murder, a shocking violent act that goes against everything Beatriz seems to be. Thankfully (?), it is revealed to be a daydream and instead Beatriz leaves the dinner, and in a strange turn swims out into the ocean.

If this movie is the first great film of the Trump Era, and it certainly feels as it was made as a reaction to his presidency, what is the message of it? To try a few times to affect change and then to give up? The movie’s philosophy for the great deal of it seems to be that the connection between people can affect great change, spiritual or otherwise. And yet, the protagonist, the movie gives up.

A bleak ending, or a defeated ending can be impactful, and it does sure say a lot about the feelings of people in this time, but it feels as if it is in conflict with that core belief of the rest of the movie.