Superheroes Aren’t Made of Money in The Paybacks #1 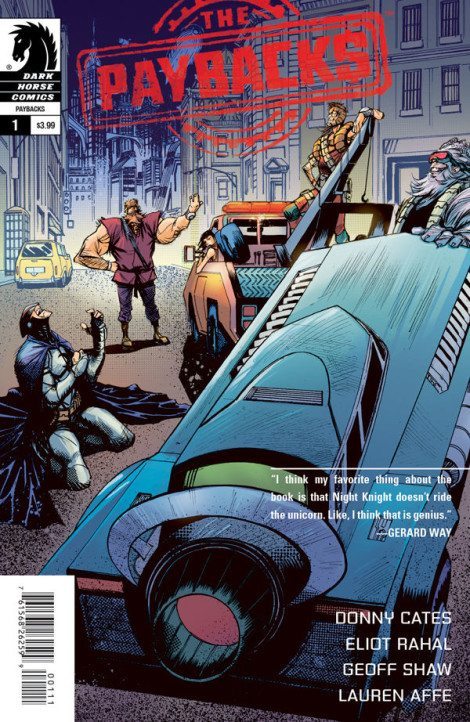 There is a lot going on in the first issue of The Paybacks, which sets out to follow a bunch of super indebted heroes as they repossess gizmos and gadgets and definitely-not-batmobiles from other superheroes that have gone bankrupt in the pursuit of justice. It’s a premise that sounds familiar and surely it must have been explored before somewhere, but the creators do a good job of making the story unique through the characters they introduce in the first issue.

With two teams getting uneaqual pages in first issue, it’s hard to sympathize with both. As chaotic and violent the circumstances surrounding the B Team performance, I feel absolutely no connection to them as they take the brunt of the first battle. Even The Driver, who seems to be the bridge between the two teams, puts B Team on the backburner while he helps the A Team with their seemingly less dangerous repo. The art, however, is beautifully done and at the very least piques curiosity in what ultimately looks like a doomed plan to originally repo who knows what. Maybe that T-Rex?

And even then, the focus is on the A Team as they arrive at Night Knight’s home to repo his belongings is… more so on Night Knight than the actual repo team. With an easy comparison to Batman, the creators are clearly poking fun at the more serious turn comics have taken these days. He’s got a Night Mare, a fearsome unicorn that he doesn’t actually ride into battle, and the Night Light, which is promptly destroyed and left behind in a wake of gruesome dead bodies). But when the Night Knight finds out his stuff is being repossessed right in the middle of handing out some justice, justice takes a backseat.

Rushing back to settle the issue, another battle ensues where the Night Knight takes on the repo team. This fight, in comparison to the B Team destruction, is played up more for the laughs, as we witness a bumbling Night Knight prove why he probably couldn’t get his vigilante justice crowdfunded. The results are hilarious and I can’t wait to see the rest of the team fleshed out as the series continues. Seriously, my one major gripe is that I wouldn’t know much about anyone except the Night Knight if there weren’t cliffnotes at the beginning of the issue.

Exploring the rest of the repo superheroes, as well as their mysterious driver, will keep me interested in where this series is headed. The ending seems to point to the obvious, someone isn’t happy with their interest in collecting payback, but who and why is intriguing and I hope the creators find a way to poke fun at some even more serious tropes down the line.

In a world where anyone can take out a loan to become the vigilante superhero of their dreams, The Paybacks has a lot of material to explore. It’s not a parody and, as much as the premise seems familiar or like it’s already been done, the issue reads fresh with as much information as the readers are provided in such a short amount of time. I’m on board to see what happens next. Let us know in the comments if you are too!