The Man Who Loved Flowers is six minutes of joyful creepiness

The Man Who Loved Flowers 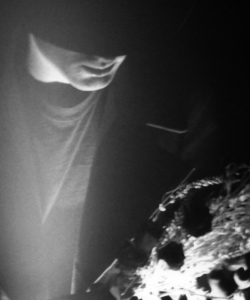 Supporting local films is something I deeply enjoy. When a film has been created locally there’s a greater sense of connection and ownership to the material. This is certainly the case in locally produced The Man Who Loved Flowers. It is an adaptation of a Stephen King short story filmed on location in Estacada, Oregon by local director Justin Zimmerman. The crew, locations, and the final product all speak to the rich filming potential Oregon has.

Since it was filmed in Estacada, the team promised to hold their first screening in that very town. I had the pleasure of attending and being among the first to see this amazing short. In six minutes, The Man Who Loved Flowers managed to tell a sweetly disturbing story without wasting precious time. While most feature length films tend to have lulls in the plot line or obvious filler, this film used every minute available to propel the story forward toward its gruesome ending.

Though I don’t want to give too much away.

My first impression was this: wow! As someone who had a chance to watch some of the filming, it was really neat to witness the final cut. All of the disjointed scenes I’d witnessed came together into a whole story, well told in a short amount of time. The actors were locals, some of whom I had the pleasure of meeting, and were of the highest caliber. No scene was wasted, and the few precious minutes each actor had (some only seconds!) were always used to push forward. Yet even with the pace, every character the audience met along the way had a certain depth that seemed almost impossible in so little time.

Props definitely go to Doug Snyder, who played the “protagonist” of this story. I watched him walk back and forth a million times in the rain while filming, but somehow he managed to make every step count. In the final cut, everything from his facial expressions to his body language were right where they needed to be to get the point across.

Between the acting and amazing score created by John W. Snyder, The Man Who Loved Flowers left absolutely no room for distraction. I couldn’t look away the entire time because I was worried I would miss something huge. That’s what a short film should aim for.

Altogether, between my behind-the-scenes experience and the actual screening, I’m pleased to see how simple yet amazing this short film is. Stephen King is a prolific writer and it is always fascinating to see his works step into the visual realm. Justin Zimmerman and his team did the source content justice in their six minute film and are receiving the recognition they deserve. From the acting, to the score, to the final cut in its entirety, The Man Who Loved Flowers leaves very little to be desired.

Where can we see it?

As of right now, it is going to be available at a number of public screenings. It has been confirmed for two local film festivals already, PDXtremeFest and Northwest Comic Fest, even though it was only roughly two weeks ago that the final cut was completed. This little film is going places, and I can’t wait to watch it take off.

For more information, check out Bricker-Down Productions and be sure to “like” The Man Who Loved Flowers on Facebook for up-to-date information on showings.