“Inside Out” is a Beautiful and Hilarious Exploration of Human Consciousness 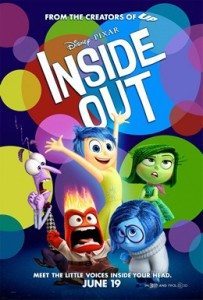 For centuries artists have attempted to capture the interworkings of the human mind – James Joyce, Salvador Dali, T.S. Eliot, Virginia Woolf – and as brilliant as many of these resulting works are, it’s surprising that the attribute they most commonly share is their impenetrability. If anything, general human thought process should be something that everyone can understand; it should be the most fundamental thing that all humans have in common. And yet most artists have instead attempted to capture the strangeness and complexity of that process, and while many have done so successfully, good luck getting through Ulysses.

Inside Out isn’t like that. Granted, it’s working with a younger and thus somewhat simpler subject, but the difference is more in the spirit of the affair. It may not attempt to receive “high art” classification like other similar attempts, but that means it’s also far less pretentious and far more sincere. And with that, it becomes a wildly insightful, moving, creative and hilarious delve into consciousness that anyone can enjoy.

Five fundamental emotions control the way Riley sees the world: Joy, Sadness, Fear, Anger and Disgust. Joy (Amy Poehler) is the de facto leader of the group, but they each have their own important role in helping Riley operate on a daily basis – except for Sadness (Phyllis Smith), who only seems to cause her harm. Joy tries to restrict Sadnesss involvement in controlling Riley as much as possible, but on Riley’s first day at a new school, Sadness interferes and a new “core memory” appears from a botched class introduction. The “core memories” are the fundamental memories that make Riley who she is, but while all of them before this point were joyful, this one is sad. When Joy interferes with the memory’s inclusion in Riley’s psyche, both she and Sadness get sucked down the memory banks.

Joy and Sadness have to travel though Long Term Memory, Dream Productions, the Subconscious, and more to make it back to Headquarters (note the pun). These locations are vibrantly displayed and each look distinct from one another, but it’s largely the clever nods toward the eccentricities and quirks of human thought that make these locations memorable and remind us why we grew to love Pixar.

For instance, any studio would make an Imagination Land filled with french fry forests and butt people, but it’s the Imaginary Boyfriend Machine – which conjures up a variety of imagined boyfriends for Riley, all of which would die for her, all of which live in Canada – that makes the scene. Leading them through all of this is Bing Bong, Riley’s childhood imaginary friend, who’s been oddly absent from the trailers but stands out thanks to a heartfelt performance by Richard Kind.

Meanwhile, Disgust, Anger and Fear are left to helm Riley’s emotions through her move to San Francisco, and while they attempt to mimic what Joy does and make Riley happy, they just can’t pull it off. All this acts as metaphor for the emotional turmoil behind moving to a new city without any friends. Riley is missing core emotions, hence why she no longer can connect to things that were once important to her; Joy and Sadness aren’t around, hence why she can neither enjoy her new surroundings nor let herself feel sadness over them.

At time Inside Out plays like a disaster movie, with parts of her psyche collapsing and none of the emotions able to figure out why things aren’t working properly, capturing the complex turmoil inside the mind of an 11-year-old girl during such difficult times. Kids probably won’t pick up on these extra dimensions, but I can see them loving this movie now for its bright environments and fun characters, only to rediscover it decades later and realize the depth of the film.

And whether or not they understand it at this point, I love what this movie teaches kids about the essential nature of sadness in our lives and how no emotions are objectively worse than others. It’s a lesson that not even many grownups have managed to fully appreciate, and if this movie can plant that idea in the heads of today’s youth, it could make a surprisingly large difference in the emotional literacy of the next generation.

Some elements of the mindscape don’t make a ton of sense when held up to scrutiny. Why do all of Riley’s mom’s emotions look like the mother, and the same for the father, but Riley’s look distinct and feature a blend of genders? What exactly is the “Train of Thought,” and what does it do besides provide a route for the characters to take to Headquarters? But kids aren’t going to worry about this stuff, and Inside Out does enough right that it gets away with it.

Final Thoughts: Inside Out is the best children’s movie in years, but it’s also one of the most accessible and enjoyable depictions of the human mind that you’ll ever see in the film. After a few subpar performances, Pixar is back to making movies that kids and parents alike can love.