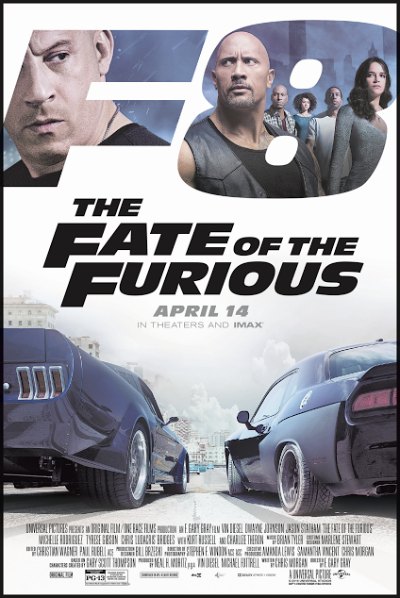 After the transcendent meditation on family that was Furious 7, you may be wondering just how can this series possibly come back, improve, or in any way live up to the example set? Honestly, by not trying to, at least not in the same way. Fate of the Furious continues the action series with over the top action and a different take on *deep growly voice* ‘Family.’

F8  opens in Cuba where Dom and Letty are enjoying their honeymoon. We’re treated to a street race (ya gotta have one!), a lesson (“It’s not the car! It’s the who’s behind the wheel!”), and a quiet scene where they bring up the idea of kids, before Charlize Theron’s character, Cipher, shows up and throws the whole thing into a skid.

Ya see, Dom and the Fam have been messing with Cipher’s business for several movies now and she’s had it up to here with the lot of ’em. That’s right, the Fast movies have their own Spectre-like organization.  She gets Dom on a leash and what follows is 2 hours and 16 minutes of absolute high-octane madness.

The movie does a lot right, I mean a lot. It gives us all the characters we have grown to love (except for Han damnit, just re-write the timeline completely! After all in Fast Five, his power is ‘a chameleon,’ he could have escaped that crash!) and let’s them ham it up with each other again. There are more crazy heists, super cars, and super slo-mo. If these are movies you’ve historically liked, there is a lot more to enjoy. Statham goes from villain to bud and gets a whole lot more charming before the end, including perhaps the best scene to feature an infant in a film.

The movie doesn’t do everything right, however, I think it’s about time we get over the whole ‘hackers can do anything’ plotlines. Yet it redeems itself mildly to show some cool car-horde scenes as the bad folks control a whole fleet of the things to wreak havoc.  But then it does have a ‘hack fight’ between two characters so. *shrug emoji*

I can’t imagine how difficult it would be for someone to step into this flick without having seen the rest as it cobbles together its cast and story from pieces of the last five, from MacGuffins such as Furious 7’s God’s Eye program to Leo and Santos’ first seen in the Los Bandeleros prologue.

The movie builds and builds and builds and if you’re not up to date expect to be left in the dust.  Or at the very least with your head spinning until you find your bearings, but the movie will get you up to speed soon enough, at the very least you’ll be able to understand you’re watching a movie where people drive cars like it’s their superpower and the cars are also super and really the whole thing is sort of silly.

“Paul Walker used to say that [an eighth film] was guaranteed. And in some ways, when your brother guarantees something, you sometimes feel like you have to make sure it comes to pass… so if fate has it, then you’ll get this when you hear about it. [Furious 7] was for Paul, [the eighth film] is from Paul.” – Vin Diesel (emphasis mine)