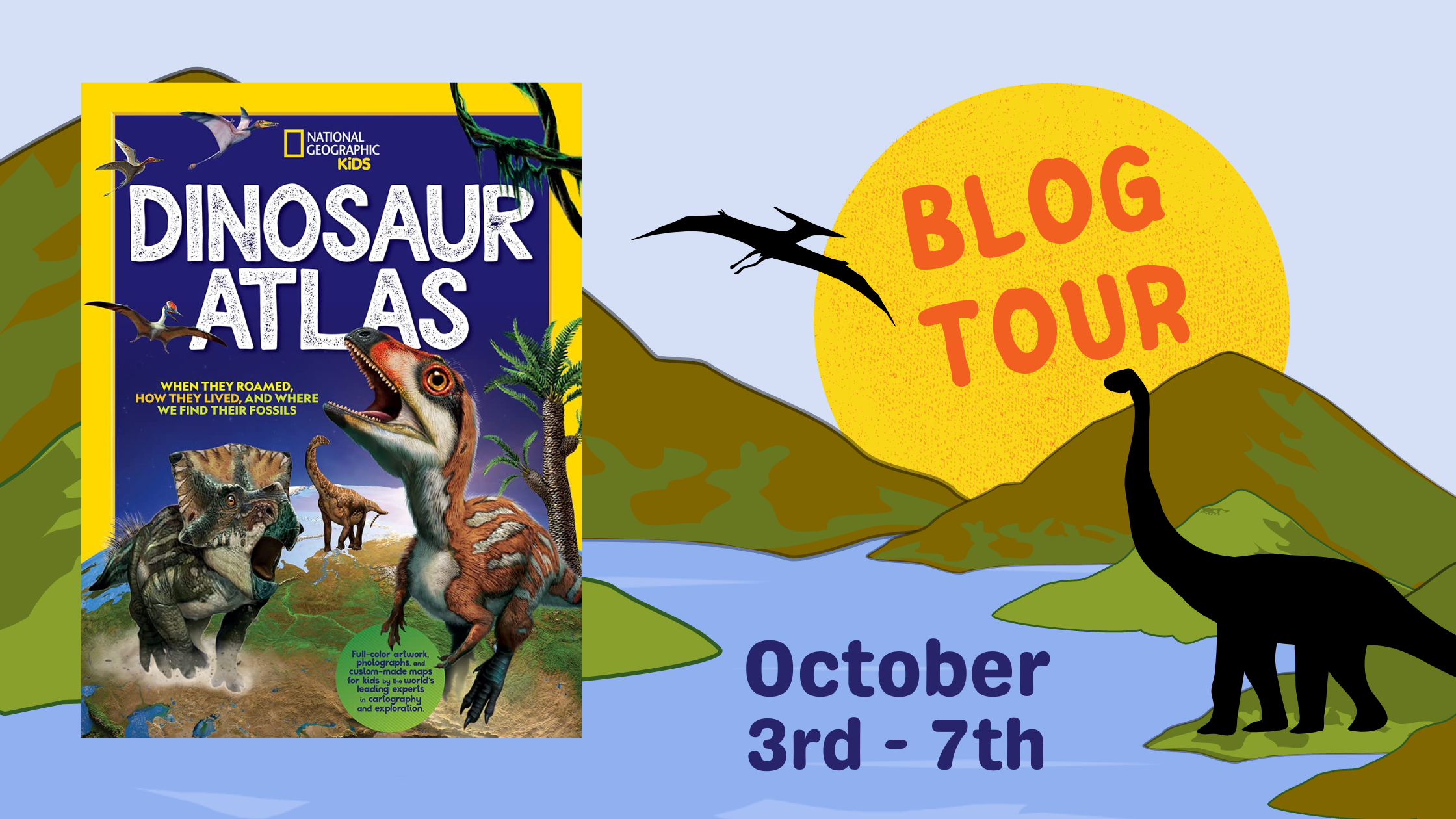 To celebrate the release of the National Geographic Kids Dinosaur Atlas on September 20th, come along on a blog tour that spans the continents as we showcase not only the most awesome dinosaurs, but also highlight the geography, environment, and climate that supported these ferocious, fascinating, and fabulous creatures. This is a blog tour to really sink your teeth into!

South America was part of the southern supercontinent called Gondwana. Gondwana began to break apart about 200 million years ago. About 150 million years ago, South America moved away from Africa. It was soon far off by itself. The dinosaurs here evolved into species that were different from dinosaurs on other continents. Scientists think that may be why South American sauropods were so big. They are some of Earth’s largest dinosaurs. 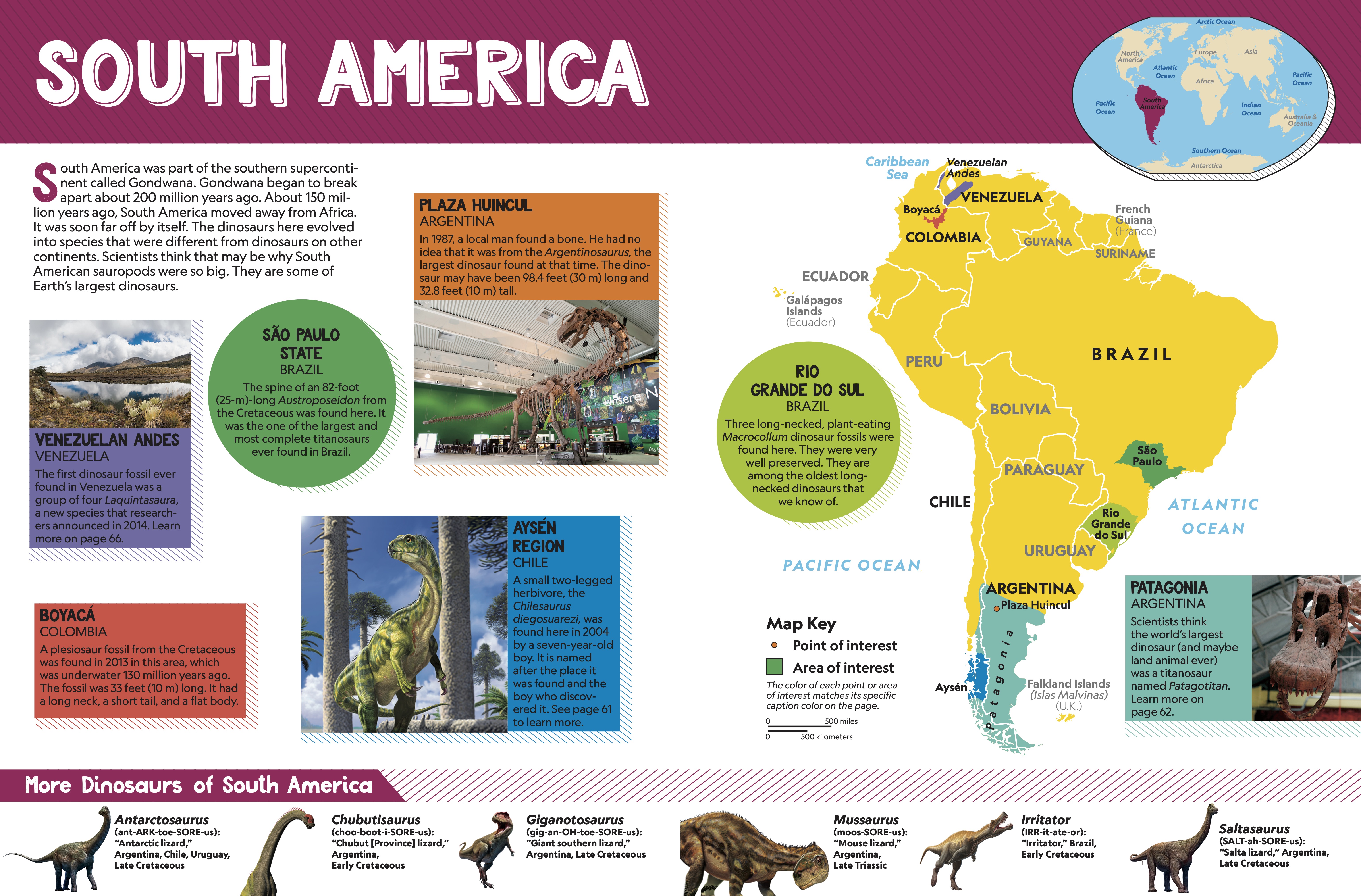 South America has some of the biggest dinosaur fossils of all time. They are mostly found in one area: Patagonia. This is a place in Chile and Argentina where the Andes run between the two countries. Like other places around the world where fossils are found, the Argentinian side of Patagonia is a desert badlands. The dirt and rocks have worn away, which makes it easier to spot fossils. Scientists still aren’t sure why the dinosaurs in this place were so big. It may be because of the climate, the land, or the food that grew in the area. 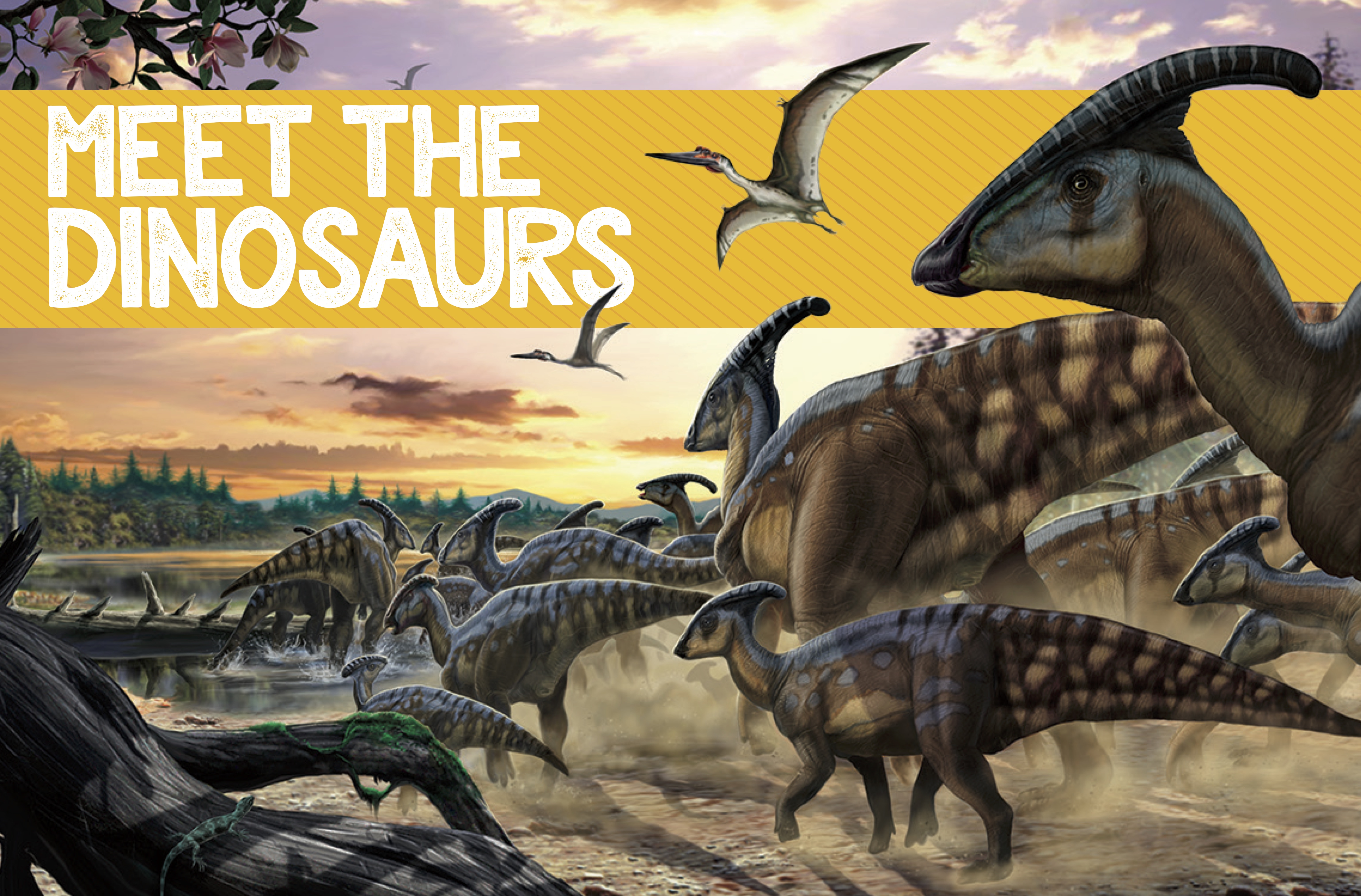 The Giant Titanosaurs
Titanosaurs, a group of sauropods including Dreadnoughtus, Argentinosaurus, and Patagotitan, were huge. They had big bodies and small heads. Their very long necks helped them reach plants and leaves up high. With tiny teeth, they may not have been able to chew, so they may have swallowed mouthfuls of plants whole. Titanosaurs walked on four legs, but they were so heavy that they had to be careful with each step. Their bones could break if they moved too fast.

ARGENTINOSAURUS (AR-gen-TEEN-oh-SORE-us)
MEANING: “Argentina lizard”
PERIOD: Late Cretaceous
Scientists think this huge 121-foot (37-m)-long herbivore might have needed to eat about 100,000 calories per day—that’s 50 whole chocolate cakes! And it may have had weak jaws and thin teeth that could help it rip the leaves off trees. But scientists aren’t sure, because an Argentinosaurus skull has never been found. 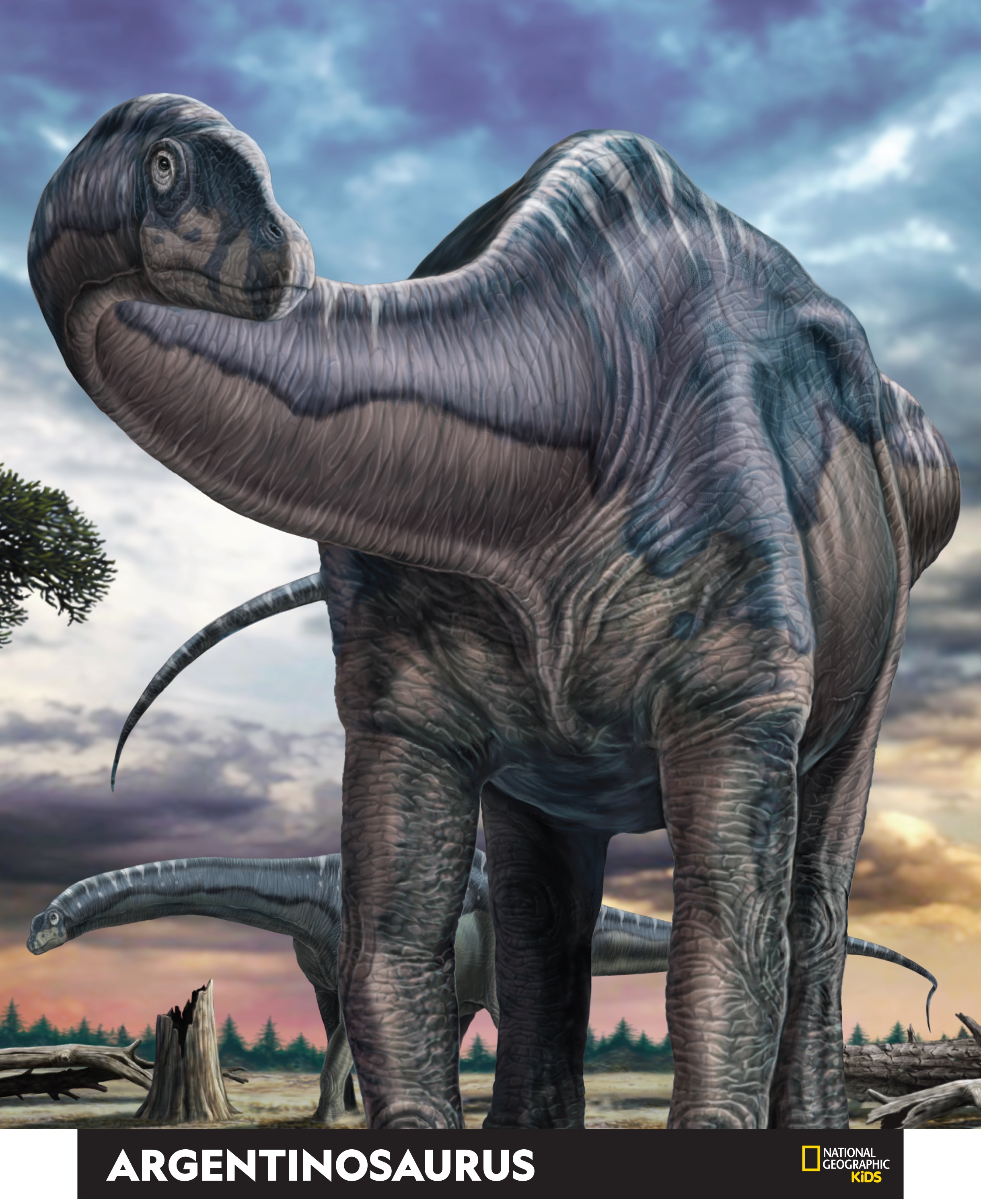 Discovered by a Kid!
In 2004, seven-year-old Diego Suarez joined his parents on a trip to the southern Aysén Region of Chile. While his parents were studying rocks in the Andes mountains, Diego found a fossil! Soon his geologist parents and other scientists began looking at the fossil site. The group found more than 12 turkey-size fossils. Five of the skeletons were complete! They named this dinosaur Chilesaurus diegosuarezi after Chile, the place it was found,
and Diego Suarez, who first found it. 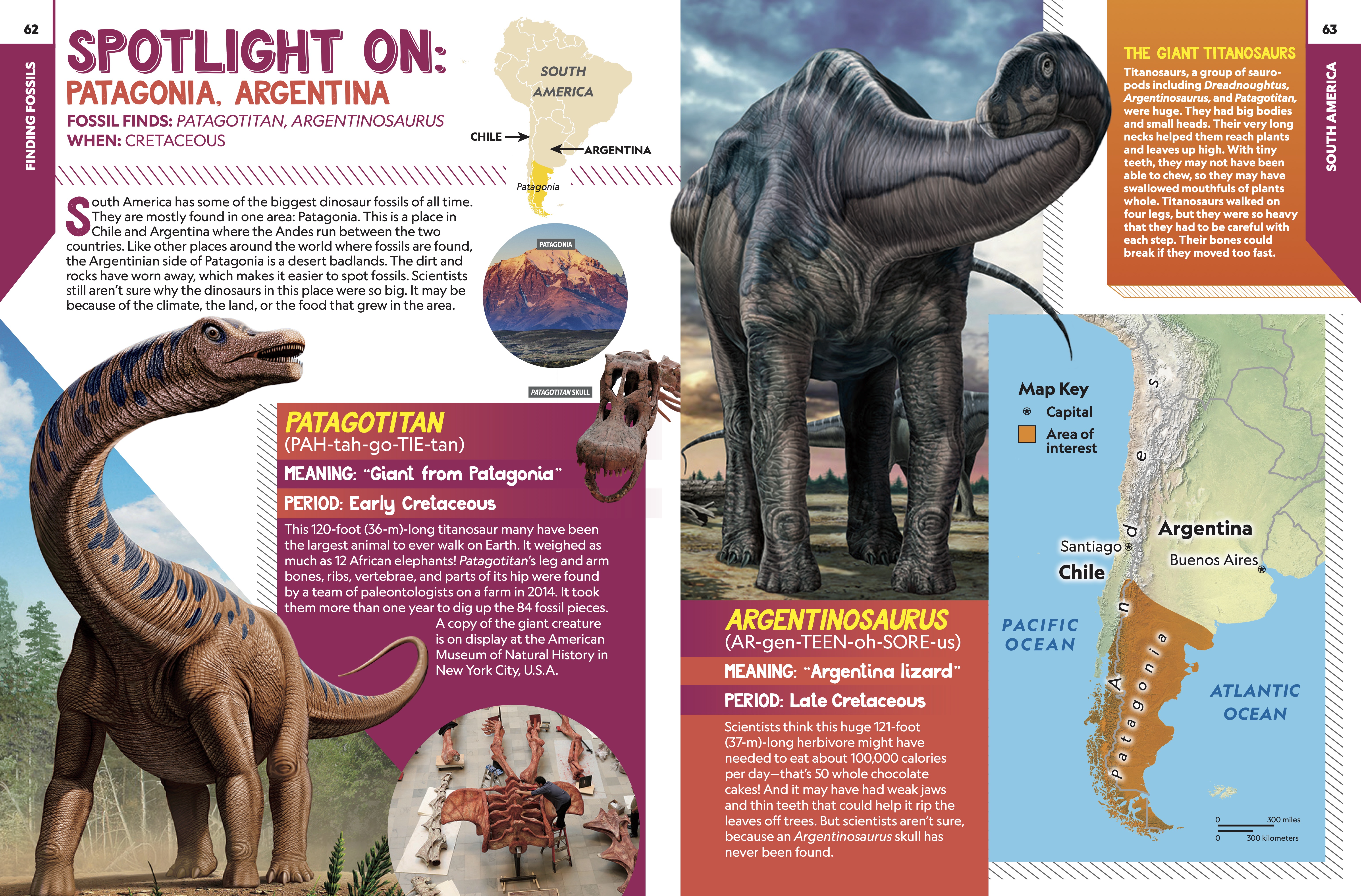 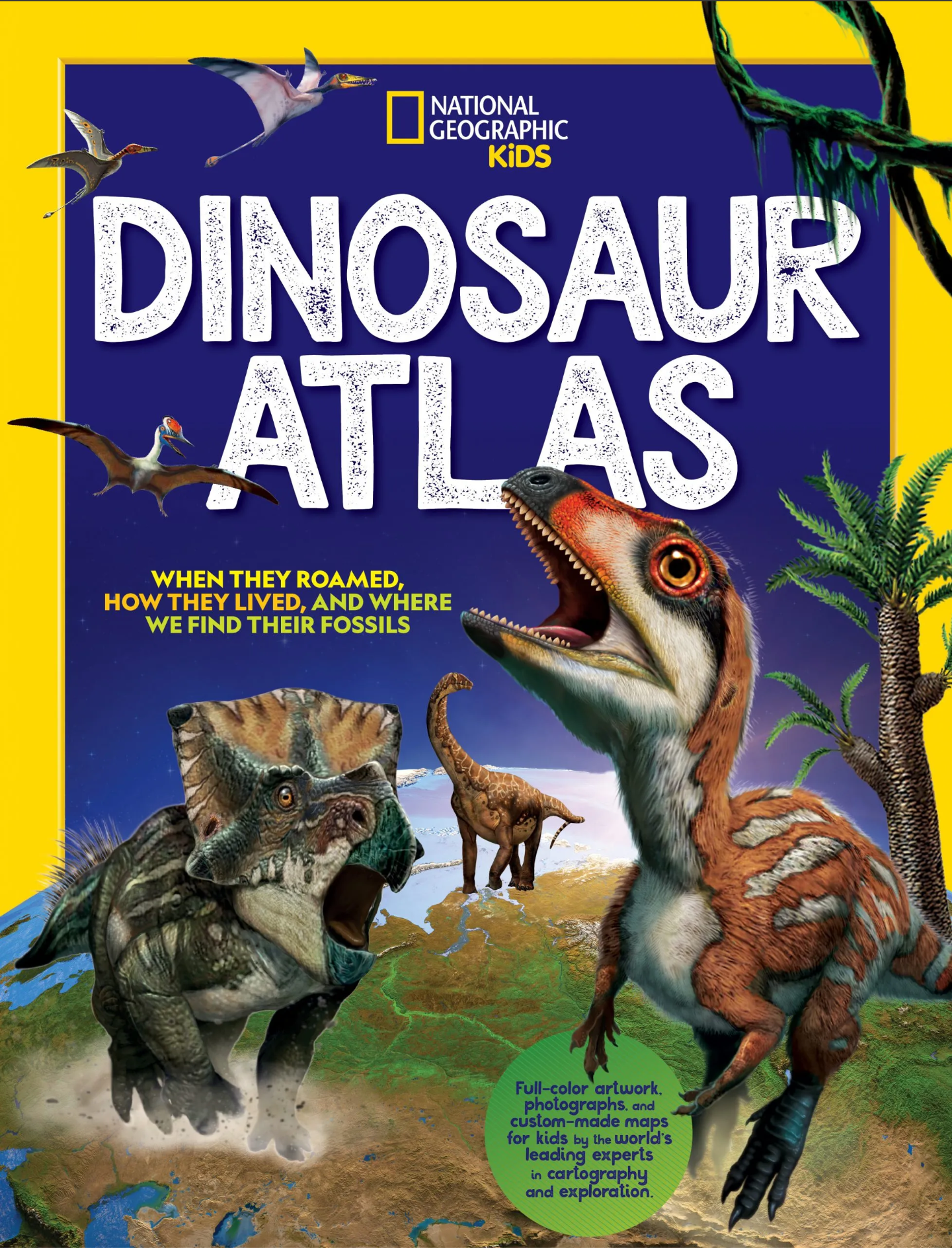 With more than 75 prehistoric creatures featured, the National Geographic Kids Dinosaur Atlas takes readers on a tour of every dinosaur-inhabited continent, from Pangea to the modern day, revealing which creatures lived there, what their habitats were like and where dinosaur bones are being found today. Special sections introducing the dinosaur family tree, a prehistoric era timeline, the geography of the prehistoric globe, what happened to the dinosaurs, and a dinosaur dictionary  (with phonetic pronunciations) are also included . Readers will find inspiration from profiles of diverse paleontologists from around the world.

The oversized hardcover format showcases stunning, full color dinosaur illustrations on every page and the custom-made, kid-friendly maps were created by National Geographic's legendary cartography and exploration experts. Vetted and curated by Dr. Steve Brusatte — a paleontologist on faculty at the School of Geosciences at the University of Edinburg, a PhD recipient from Columbia University, and the science consultant for the Jurassic World franchise — this atlas contains the most detailed and accurate information not only about dino "fan favorites" but also about the most recent dinosaur discoveries from less explored dig sites around the world. 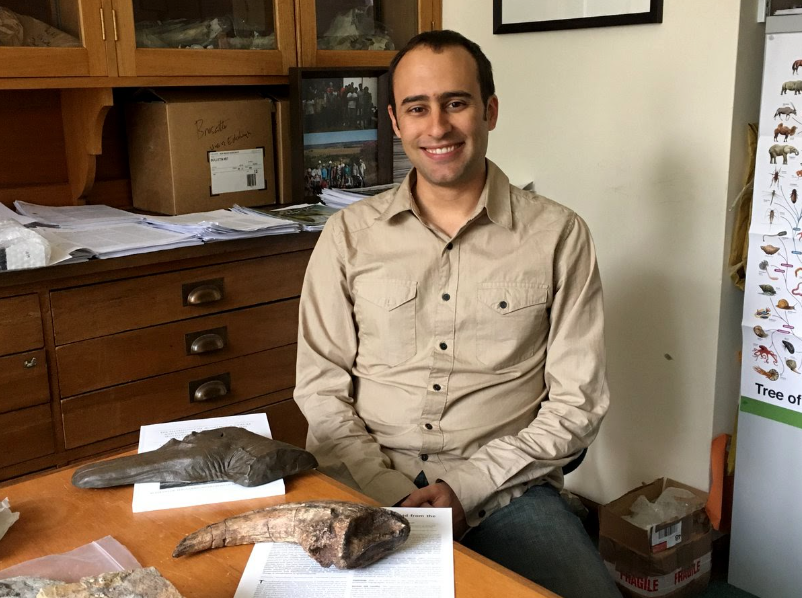 About the Expert Reviewer, Professor Steve Brusatte:
STEVE BRUSATTE, a paleontologist on the faculty of the School of GeoSciences at the University of Edinburgh in Scotland, served as the expert reviewer for this atlas. He grew up in the midwestern United States and has a B.S. in Geophysical Sciences from the University of Chicago, M.Sc. in Paleobiology from the University of Bristol, and Ph.D. in Earth and Environmental Sciences from Columbia University in New York. He has written more than 150 peer-reviewed scientific papers during his 15 years of research in the field, named and described over a dozen new species of dinosaurs and mammals, and led groundbreaking studies on how dinosaurs rose to dominance and eventually went extinct, and were then replaced by mammals. Among his particular research interests are the evolutionary transition between dinosaurs and birds and the rise of placental mammals. He is also a noted specialist on the anatomy, genealogy, and evolution of the carnivorous dinosaurs like Tyrannosaurus and Velociraptor. His 2018 book, The Rise and Fall of the Dinosaurs, was a New York Times best seller, and he is the science consultant for the Jurassic World film franchise. 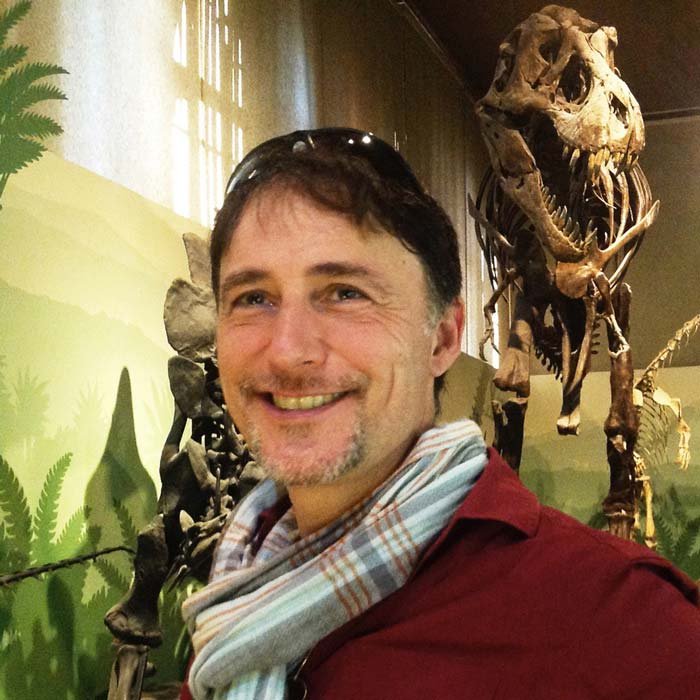 About the illustrator, Franco Tempesta:
Born in Milan, Italy, FRANCO TEMPESTA has loved drawing animals, dinosaurs and dragons since he was a child.  Franco specializes in naturalistic illustration, and in the last twenty years has focused his attention on the realization of realistic images of dinosaurs and prehistoric animals.  In April 2014 the Museum of Paleontology of Naples hosted a permanent exhibition dedicated to his illustrations of dinosaurs and in 2016 the Science Museum of Camerino hosted an exhibition of his paleo art.

One thought on “Welcome to the National Geographic Kids Dinosaur Atlas Blog Tour!”