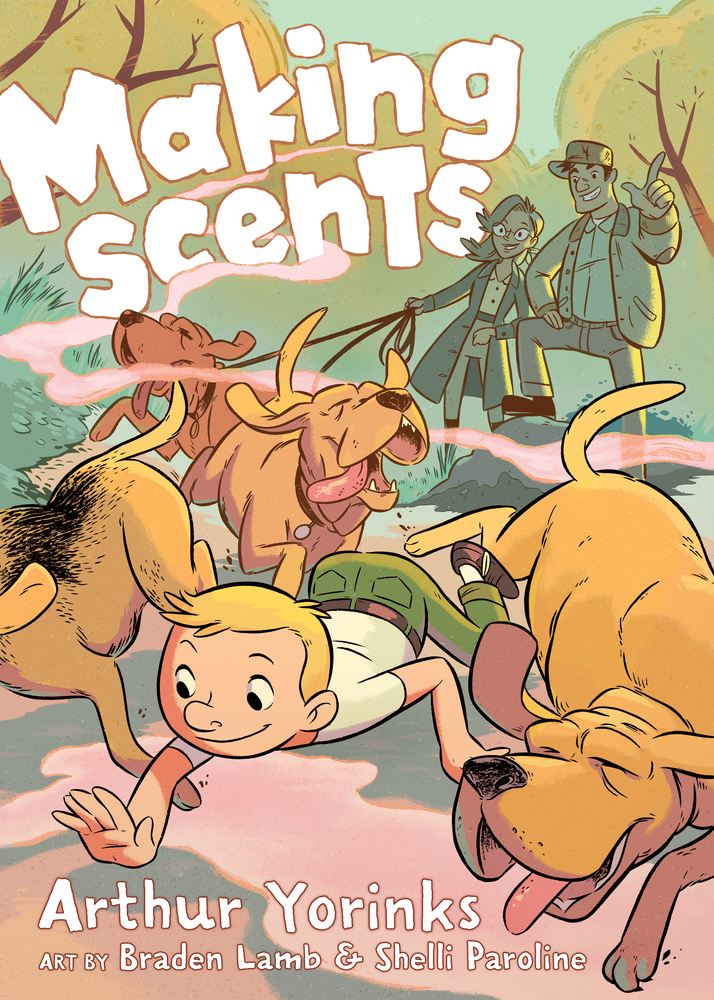 
Rating:
Dogs and quirky kids are a staple in middle grade fiction. Whenever you put the two together shenanigans seem to inevitably ensue. Making Scents is a graphic novel that starts off with the promise of silly, young Mickey and his gaggle of bloodhound friends having all kinds of adventures. But the book quickly changes pace and becomes a much deeper story – something that I’m not sure is to it’s credit.

Making Scents is the story of one young boy named Mickey who was raised by some serious dog people. His parents made a living raising bloodhounds and with that many dogs around Mickey developed something of a dog complex. Gifted with a sense of smell almost on par with his four-legged siblings, he lives a happy life with his very eccentric parents – until they are killed in a car accident and his whole life turns upside down.

Mickey finds himself separated from the dogs he’s known and loved his entire life and sent far away to live with distant relatives he’s never met. His Aunt Jou Jou is kind but her health is failing and her husband hates dogs only slightly more than he hates kids. It’s a dynamic that feels familiar to readers as orphans forced to live with seemingly uncaring family members is something of a middle grade trope.

Honestly, I’m a little over ‘tragic’ stories inevitably involving the kids’ parents being killed in some way. I think that Making Scents might have been a much better book if Mickey had just been allowed to be a kid having adventures with his kooky parents and their pack of bloodhounds.

That’s not to say that the story we get in Making Scents is bad.

For the most part, it starts off strong and the first half of the book is pretty great. That is, of course, the part of the book he spends with his parents. After that, the story kinda falters. A lot of it has to do with just how awful Mickey’s uncle is to him once they’re forced to live together. He’s very vocally against kids and talks poorly about Mickey’s parents in front of him immediately after they died. The guy seriously lacks compassion.

A big part of the book focuses on Mickey and his uncle learning to live with one another – but one set back and he’s back to his mean self. In the end, he comes around and everything works out. But the journey there is hard to stomach sometimes. He’s constantly getting on to Mickey about his dog-like habits which, while understandably not socially acceptable, are part of the character’s charm. There could have been a lot of potential there if the book had embraced a different plot – instead his abilities get sidelined and shoehorned into the book’s ultimate messages about grief and change.

Making Scents‘ story ultimately focuses a lot on the different ways people react to grief. In that way, I suppose the story succeeds. We see Mickey struggle with the fact that as a child he has little control over his life or what happens to him. And we later see Uncle Irv struggling with the potential loss of his beloved Jou Jou – and the daunting task of then raising Mickey by himself.

Unfortunately, as the latter half of the story shifts its focus, Mickey’s dog-like abilities seem to be less important. Their final use simply leads to a somewhat climactic argument between Mickey and Uncle Irv. Ultimately, as far as middle grade graphic novels go, Making Scents is a decent read.

Now, the illustrations in this book are amazing.

I love the character designs and the clever use of simple color palettes. Braden Lamb and Shelli Paroline are a married couple who do some pretty great work together. And while the story itself is okay, one of the best parts of the book is actually the ‘making of’ section they included in the back. Lamb and Paroline discuss all the parts of making a graphic novel – from scripts to color choices to character design and more. It’s a super cool addition to an otherwise just okay read.

I can’t say that Making Scents is necessarily anything special but I did enjoy the read more or less. I think I would have enjoyed it more if the story had taken any number of alternative directions, but overall Yorink tells a good story with a message that should resonate with readers. That said, Making Scents is probably better suited for it’s target middle grade audience than older readers as middle grade readers are more likely to be forgiving of the usual genre tropes.

Give it a read if you’re looking for a book with a strong message about grief and learning to accept change – but pass if you’re hoping for a fun story about a boy and his dogs. You won’t get that here.