Return to Wakanda With the Blu-Ray Release of ‘Black Panther’ — Out Today on Blu-Ray Combo Pack and Digital HD!

If there has been a singular defining moment in Marvel’s history of superhero films it’s not the Infinity Wars which they’ve billed as ‘the most ambitious crossover ever’ — it’s Black Panther. 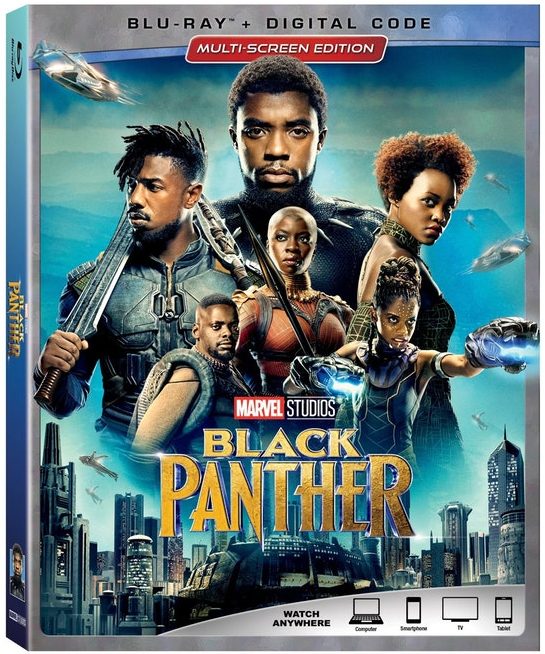 If there has been a singular defining moment in Marvel’s history of superhero films it’s not the Infinity Wars which they’ve billed as ‘the most ambitious crossover ever’ — it’s Black Panther. Both films may be blockbusters and both may be in the top ten highest grossing films of all time. But the importance of Black Panther cannot be understated. It shirked the traditional superhero format and proved audiences are desperate for films that embrace diverse characters and tell original stories.

There’s a reason that short of the tentpole Avengers films Black Panther is the highest grossing Marvel film to date.

We got our first glimpse at Chadwick Boseman’s T’Challa in Captain America: Civil War and ever since we’ve been waiting for more. Black Panther fleshes out not just the character but the world of Wakanda which is unlike nothing else we’ve ever seen in this cinematic universe – or anywhere else for that matter (outside of the comics). It’s a futuristic world that’s both beautiful and awe inspiring, something that it truly owes to how grounded it remains in it’s African roots. Black Panther is a tale of kings and power and betrayal that blows pretty much any other Marvel Cinematic Universe story out of the water.

I am in complete awe with this cast and their characters. Everyone is amazing through out the film and it’s so refreshing to see these immensely powerful and intelligent Black characters portrayed by actors who own every moment. The casting was brilliant. We already fell in love with Chadwick Boseman in Captain American: Civil War but Black Panther gave us so many new characters to love. Killmonger is such a fantastic antagonist and his motiviations are so much more raw and real than any other ‘villain’ we’ve seen so far. And how can you not love Shuri? I had only seen twenty minutes of this film and I was already in love with her.

If you’re feeling some of the same superhero fatigue that I have over the last year or so then Black Panther is the film for you. It’s Marvel and yet it’s something entirely it’s own. It’s the kind of film that deserves all the accolades it receives and more. You can find hundreds of articles by writers far better than me who have a much more knowledgable, personal take on Black Panther and it’s importance and that is something I highly encourage you do. But at the very least watch this film and know that it is not just amazing but that it is a complete game changer.

With all that high praise in mind, I have to believe that people’s expectations of the blu-ray release and it’s special features are pretty high. For the most part they are fairly standard which was a little disappointing considering how much reverence this film deserves. But there’s one featurette in particular that saves the whole thing – From Page to Screen: A Roundtable Discussion.

From Page to Screen: A Roundtable Discussion is the deep, moving conversation that this film deserves. Writers Christopher Priest, Don McGregor, Joe Robert Cole, and Ta-Nehisi sit down with Ryan Coogler to discuss the history of the Black Panther. They discuss the character’s origins and the comic’s influences on Marvel Comics over the years including the groundbreaking moment when he first removed his mask to reveal himself as an African superhero. It’s a powerful discussion that shows how the comics influenced the film and how the themes throughout T’Challa’s stories transcend both mediums. It’s a really cool little discussion between some very important people in Black Panther’s development.

The rest of the special features are pretty standard. Wakanda Revealed: Exploring the Technology  discusses technology in the film as well as Wakanda’s changing philosophy throughout the film and their potential as world leaders.

The Warriors Within is an excellent short featurette that recognizes the importance of the powerful women in Black Panther. It highlights their unique personalities and importance to the story and reminds us just how awesome it is that damn near everyone close to T’Challa is a powerful, black woman.

The Hidden Kingdom Revealed talks a lot about the filmmakers’ dedication to creating an authentic, real African nation in their version of Wakanda. The featurette shows how they tried to truly embrace the culture by using real languages and basing the various tribes on real tribal communities across the continent. It’s almost too short — there is undoubtedly a lot more that could have been done and explained as far as the creation of Wakanda goes. But it’s very cool to see just how seriously everyone took the creation of this fantastic nation and how it almost becomes a character itself.

Crowning of a New King  is primarily about the development of T’Challa’s through out the film. It highlights the challenges he faces in this film after becoming a king. One of the things that’s unique about T’Challa is that he’s not just a superhero. He’s also a king and the leader of effectively the most powerful nation on Earth. And that’s the most important part of this film: T’Challa’s move from a supporting character in Civil War into this powerful figure dealing both with the internal and external conflicts threatening Wakanda.

There are also a few other special features that may be worth a look.

MCU fans may appreciate the sneak peek at Ant-Man and The Wasp as well as Marvel Studios: The First Ten Years which reflects on the last decade of films leading into Infinity War. There’s also Creating the Chase: An Inside Look at Black Panther’s Car Chase which offers a very brief look at the making of the car chase in Korea. There’s also an exclusive, one minute featurette on Movies Anywhere in which the cast of Black Panther name their favorite MCU films. (Spoiler: Thor: Ragnarok is a big favorite!) The coolest little mini-features, though, are probably the Come to Wakanda travel videos which depict the country both before and after their reveal to the world at the end of the film.

And, of course, there’s an audio commentary as well as some deleted and extended scenes – some that add a lot to the film!

Black Panther is an amazing entry into the Marvel Cinematic Universe. It is one of the best looking films as well as one of the best put together stories. While a lot of the other films look and feel like they could run into one another with little distinction Black Panther sets itself apart. It’s not just a superhero film. It’s a story of a king and his country as they rise to take their place in the world. And it’s proven by its success that diverse stories work – not just in the MCU but anywhere.

As far as the blu-ray release is concerned, I was pretty happy with the film. I think that the folks that put it together missed a major opportunity to actually show the influence the film had on fans. There was great potential for a special feature that highlighted the importance of Black Panther by actually interviewing viewers. But short of that, the bonus features are pretty solid and the roundtable discussion with the comic writers and Ryan Coogler really does a great job of highlighting the character’s history and influence from his first appearance until now.

Black Panther is available on blu-ray combo pack starting today! If you can, definitely redeem your digital copy on Movies Anywhere so you can check out the digital exclusive bonus features like the Wakanda travel videos. And, really, just get the movie because it’s awesome and everyone needs to be able to return to Wakanda whenever they want!