“Ouija” Has Plenty Of Jump Scares But Nothing Memorable 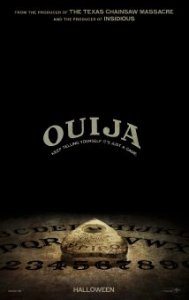 I admit as a kid I bought a pocket Ouija board and we played it at school. Of course it was so tiny it was barely usable but the principle was the same. We all denied we were moving it and it was just good fun. Ouija takes that childhood fun time and tries to turn it into a a horror movie. They succeed only because of jump-scare tactics. Other than that it was very dull but I do have to hand it to them for keeping it PG-13. That to me is just so it can be a Halloween date movie for high-schoolers.There were plenty of screams and yells in the movie theater.

The premise of the movie is that Debbie (Shelley Hennig) finds an old spirit board in the attic and awakens a pissed off evil spirit. She ends up becoming possessed and commits suicide. Her childhood friend, Laine (Olivia Cooke) knows that Debbie would never do such a thing, so begins the investigation. She convinces Debbie’s boyfriend, Pete (Douglas Smith), her boyfriend, Trevor (Daren Kagasoff), and a mutual friend, Isabelle (Bianca A. Santos) to meet her at Debbie’s old house to try and reach Debbie via the Ouija board. They sure opened a can of worms – er demons? – with that one.

The problem with Ouija is that yes it’s a horror movie but there is nothing suspenseful or psychological about it. The only “scary” thing about this movie is using the jump-scare tactic. “BOO!” someone’s around the corner kind of thing. They used that over and over again. When the actual demon/rotted corpse showed up you weren’t scared anymore. There was no plot development and the characters were all one dimensional. There was obviously freaky stuff going on in Debbie’s old house and the characters find out about it throughout the movie, but you never really care about the people. There was no originality to this movie, what you see here is what you’ve seen in hundreds of other horror movies.

Final Thoughts: Ouija’s PG-13 rating is aimed towards teenagers and uses every trick in the horror movie book, but it does not make for a very exciting movie. There is not character development or actual suspense. You’re basically just primed for the next scare and it gets boring. You have a girl that summons a demon, killing happens, find out about demon’s past, and do stuff to banish it back to Hell. There’s the story. They tried to make a board game scary and they failed.