Rampage, A Man and His Ape

Rampage puts The Rock front and center with a big goofy ape and it’s a pretty stupid fun ride. He has solidified his ability to not just rake in millions and put butts in the theaters, but he’s proven he can do it with the most unexpected, unasked for properties. 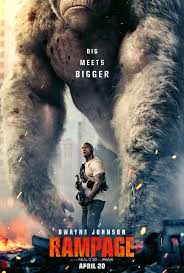 
Rating:
The constant churn of IPs into feature films has brought us this, the feature film adaption of Rampage, the midway… classic(?) about three people getting exposed to different triggers and being monstro-transmorgified into a giant gorilla, wolf-man, and lizard. This time around its just run of the mill animals being exposed to these mutations, you know, for the sake of realism.

The Rock plays primatologist Davis Okoye, who works with his best gorilla pal George, an albino ape. They speak ASL and George has a twisted sense of humor, scaring new workers at the zoo. It’s a good friendship… until a contagion from a fallen space station lands in his enclosure and makes the ape go giant.

Over the next hour and change, Okoye joins up with Naomi Harris’s Dr. Kate Caldwell and a cowboy government agent (played absolutely delightfully by Jeffrey Dean Morgan) to fight the monsters rampaging across the US. There are lots of guns and tanks firing at the creatures and a lot of destruction of human cities to be had.

Surprisingly enough, the movie shines when it comes to destruction. The destruction is plentiful and there are no ridiculous contrivances for why there are no human deaths. The movie is pretty explicit, folks are getting eaten or crushed left and right. I appreciate that. And when the monsters turn on each other, it is similarly intense.

Rampage earns enough credit early on through the charisma of its various actors (Jake Lacy is absolutely a treasure as a breakfast munching imbecile villain) that by the time wanton destruction occurs, you’re on board with what comes. You wanna see The Rock and George get reunited and get their act together. The Rock and Morgan banter back and forth and it’s hysterical.

It’s trope-y as to be expected. The Rock is also a former special soldier (because how else to explain that physique?) in addition to poacher fighter and the ape guy. But it often just moves past those moments of weakness quickly and goes to what they really want: monsters crushing buildings and fighting each other.

With Jumanji: Welcome to the Jungle and now Rampage, The Rock has solidified his ability to not just rake in millions and put butts in the theaters, he’s proven he can do it with the most unexpected, unasked for properties. It helps that both movies are genuinely enjoyable of course, but if you want good movies to do great at the box office, you find somewhere to put The Rock.

Rampage puts him front and center with a big goofy ape and it’s a pretty stupid fun ride.