The Strangers: Bore At Night

Companies saw a place for another low budget horror movie to turn a profit but they couldn’t be bothered enough to wait an extra month to secure that sweet Friday the 13th money. The Strangers: Prey At Night cost $5mil to make, is projected to take in $7mil opening weekend and that’s enough for them. 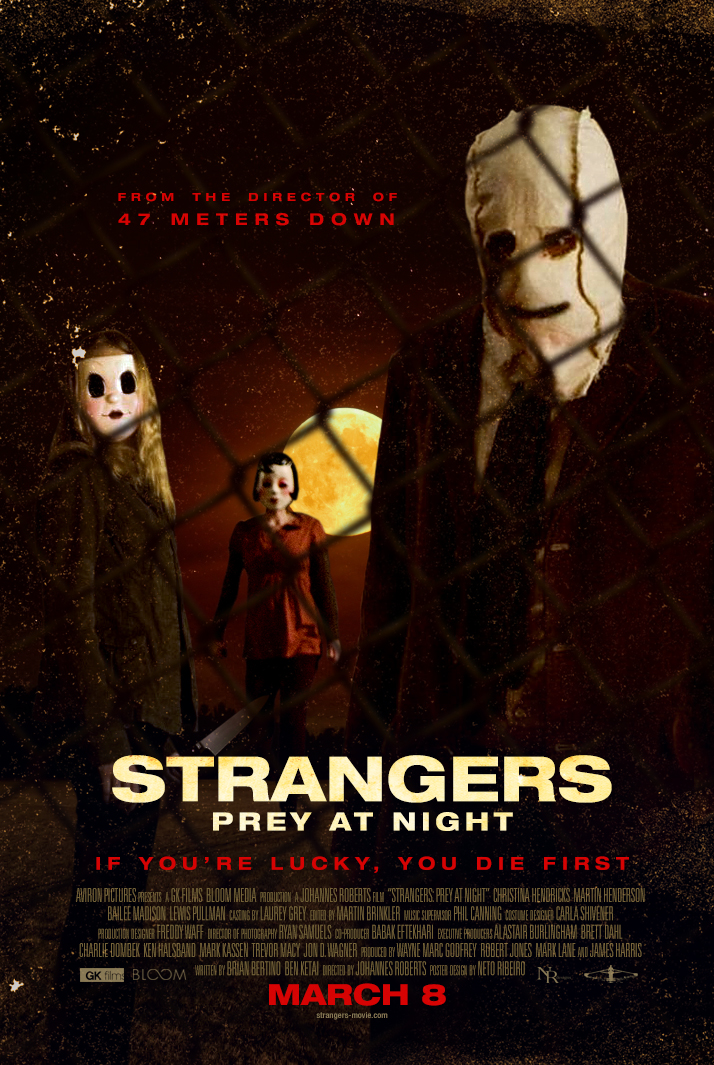 
Rating:
The Strangers: Prey at Night is the sequel 10 years later to a movie that has accrued a solid 45% on Rotten Tomatoes. I haven’t seen the original, so if that disqualifies me from having an opinion on this in your eyes go ahead and look elsewhere. I thought the movie was trash. That’s all you need to know.

A family leaves their home to spend the night over at an empty vacation spot in Gatlin Lake. They are on their way to drop off their daughter at a boarding school. Unfortunately, they end up the prey for a trio of murderers who are… well they are just out to kill I guess?

And that’s the thing. In watching a sequel to a horror movie that’s known for the bad guys getting away with it, in the end, you wonder… why? While watching this poor family (who we really don’t know much about, but they seem to be nice enough) get stabbed and hunted down you think why are they doing this, why am I watching this, and why should I care? The thing is you don’t. And when one of the villains speaks their reasoning, they answer, ‘Why not?’

I’ll tell you why. Companies saw a place for another low budget horror movie to turn a profit but they couldn’t be bothered enough to wait an extra month and secure that sweet Friday the 13th money. It cost $5mil to make, is projected to take in $7mil in its opening weekend and that’s enough for them. In the process, they revived a dead ‘franchise’ and threw in some 80s aesthetic and a poppy soundtrack to imbue it with some pizzazz (it works in so many other flicks) and there you go. The Strangers: Prey at Night.

The movie is dull and feels sorta reprehensible that we are watching this with no reason to root or care for the ‘‘ victims or the villains. When a horror film goes from being a one-off to a series invariably there is a point where the villain becomes the anti-hero and the movies become shlocky, campy, and/or goofy. This hasn’t gotten there yet.

There is a single scene in which you really root for the victims and the 80s soundtrack works well but that is the high point of the 85 minutes. It’s only 85 minutes?! It feels so much longer!

The Strangers merits a half star only because of the camera work. At times we view the movie peeking from around a building, or out from a clump of bushes. It has the power to put us as voyeurs in the scene but also exudes creep factor on an otherwise innocuous moment. Even if a killer (or three) was not present the scene would be creepy knowing someone – us – was looking from these skewed views.

I really look forward to seeing what the creators have to say about this movie, they must have some goal or thought behind their project, things were deliberately made but I am not sure it showed. I fear the goal is nothing past ‘make a few bucks.’ We’ll see.