Readers who are familiar with Angelou and Basquiat and those who are meeting them for the first time alike will enjoy the way the words and images blend together to inspire children to fearlessness in Life Doesn’t Frighten Me. 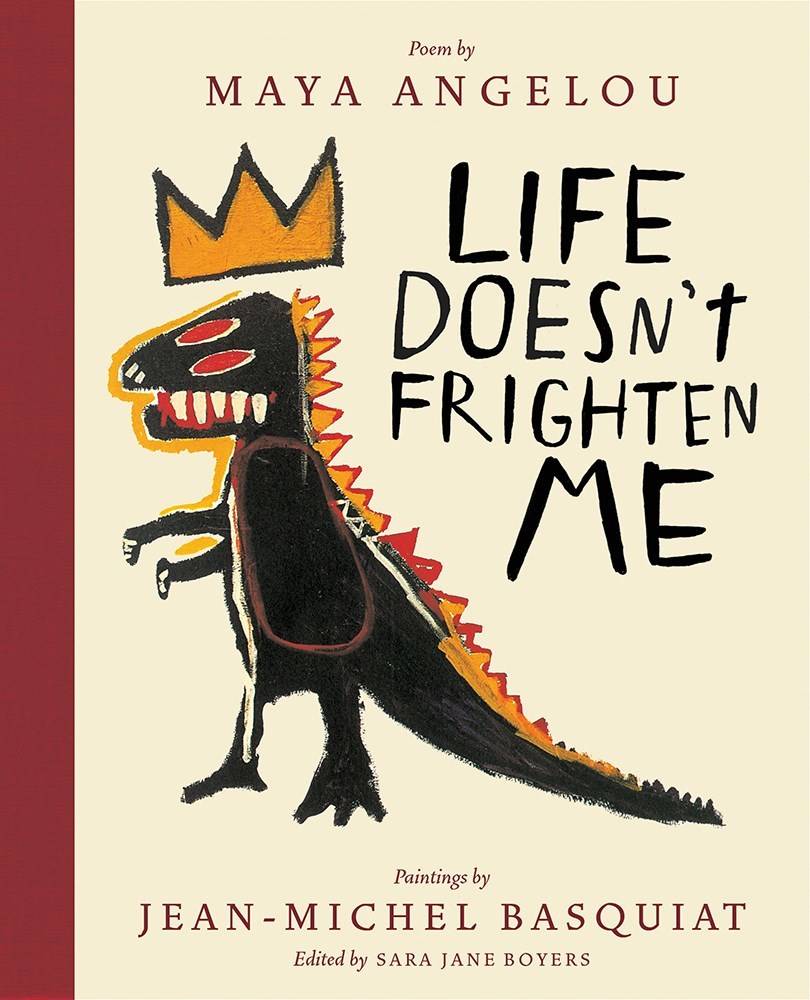 
Rating:
Twenty-five years after it’s initial release in 1993, Life Doesn’t Frighten Me is being re-released in a gorgeous new anniversary edition. The picture book blends the words of renown poet Maya Angelou with the incredible works of Jean-Michel Basquiat to create a powerful journey through both beloved artists’ works. Readers who are familiar with Angelou and Basquiat and those who are meeting them for the first time alike will enjoy the way the words and images blend together to inspire children to fearlessness.

The book takes its title and text from the Maya Angelou poem, ‘Life Doesn’t Frighten Me.’ It’s a great poem for children because it explores the idea of facing one’s fear with courage and strength in a way that they can easily understand. Angelou’s words invoke the image of a child fearlessly facing the day and all the things that might scare her – from a new school to scary shadows to loud dogs and anything else in between. Some of the fears are bigger like men fighting and strangers in the dark.

But the message remains the same: life doesn’t frighten me.

Sara Jane Boyers, the editor, does a masterful job of pairing the various lines of ‘Life Doesn’t Frighten Me‘ with pieces from Basquiat’s collection of paintings. I won’t pretend to be an art scholar. My familiarity with Basquiat is extremely limited. But his work matches the feel of the poem with it’s uniquely abstract, provocative style. The images are at times dark but they offer up a chance for young readers to really look deeper into the artwork.

Much of Life Doesn’t Frighten Me lends itself to dialogue and discussion. The things that Angelou mentions throughout the poem – like dogs, scary noises in the night, and fire breathing dragons – are things that a lot kids might fear. But the powerful mantra of “Life Doesn’t Frighten Me At All” which is repeated throughout helps kids take those messages to heart and potentially gives them a tool to face those fears in the real world. If nothing else, it gives young readers something to discuss with their caretakers who read along with them.

Some of the images might be a little scary for some children, I’ll admit. And to some younger readers they will undoubtedly come off as simply illustrations meant to go along with the story. But older readers will enjoy looking deeper at the images to discuss what it was Basquiat may have been trying to say through them.

Life Doesn’t Frighten Me is a powerful little book that offers young readers a first introduction to Maya Angelou and Jean-Michel Basquiat alongside a great message. While children may not be able to appreciate the magnitude of talent coming together in this book, the editor certainly makes sure that it’s an enjoyable experience from start to finish. It’s the perfect example of a great poetry-based picture book and it’s no surprise that twenty-five years after it’s first publication it’s earned a special anniversary edition re-release!