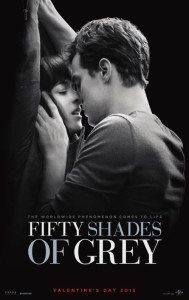 Right now, it’s cool to hate on Fifty Shades, but I don’t think it’s fair to hold the source material against it. If it were a stand-alone film, I don’t think this film would receive as much negative attention. If anything, I think it would be a stand-out drama of early 2015.

As is, I feel confident in saying that Fifty Shades of Grey is the most controversial film of the year so far.

I also really enjoyed it.

The soundtrack is mesmerizing- it’s almost on par with The Great Gatsby’s soundtrack from a few years ago. Featuring a mesh of new and classic songs, the sound of the movie is ethereal and modern with a vintage twist- the crowning jewel being Beyoncé’s slow and sultry remix of “Crazy in Love.”

The music complements the feel of the film. It’s visually stunning. The set design made good use of Christian Grey’s billionaire status and poured money into sweeping skyline shots from Christian’s private helicopter to the sleek, minimalist design of the businessman’s penthouse. Think Gossip Girl upper east side wish fulfillment except in Seattle.

Turns out our Anna is in slightly over her head –er – or rather, if Christian got his way, she’d be suspended from the ceiling over his head. After she catches Christian’s eye, he tries to get her to sign a contract to be his submissive- a contract which has some pretty scary terms and conditions.

Anna, instead of running away from Christian and/or jumping off the balcony of his penthouse suite to escape, negotiates the terms of his contract and have some explicit sexytimes in between. Here’s where the movie differed from the book- Anna in the book only manages to negotiate a few conditions (regular exercise frequency, etc.), but movie Anna is hella assertive. She negotiates many of the terms of the contract and refuses to sign when she feels uncomfortable.

The movie was laugh-out-loud funny- Anna’s drunken rendition of Christian was particularly wonderful- and the entire audience seemed to be having a lot of fun throughout the first half of the film.

The mood of the theater completely changed in the last half hour.

That’s because Christian decides to beat Anna as a punishment. The scene where he repeatedly whips Anna and she cries as she counts the lashes is completely silent. We’re meant to see Christian as an abuser and this behavior as non-consensual and not okay.

Anna stands up for herself and refuses to let Christian touch her or look at her after he physically abused her, and that’s why even though there’s discussion about how problematic this movie is, to the very last scene, that abuse is not condoned. Christian’s excuse that “it’s the way I am” rings false and unfunny in comparison to a sympathetic, genuine, and hilariously awkward Anna.

Fifty Shades is a movie about a relationship that’s marketed, both in print and on film, as a romance.

And that’s probably the only place where the movie fails. It’s not a romance. It’s a compelling, magnetic, dark story about an abusive relationship. In my mind, the fact that this movie isn’t a romance doesn’t takes away from the quality of the film. I just think that the filmmakers are marketing the film inaccurately.

I was expecting a romance from the marketing, and because of that, I was very concerned that this movie would romanticize the abusive relationship between Anna and Christian or try to gloss over the problematic aspects of the original source material.

I was so relieved that it didn’t.

I was also worried this movie would be like the horribly-acted cheese-fest that was Twilight. After all, the original source material was Twilight fan fiction.

Instead, the director took the best creative direction possible- she turned all the possible cringe-worthy moments into genuinely funny scenes.

Luckily, we don’t get the narration from inside Anna’s head like we do in the book, and the movie is stronger for it. All of Anna’s pettiness and cringe-worthy descriptions about her sexual pleasure (thank god that the words “inner goddess” were never mentioned once onscreen.) is gone, and we’re left with a genuinely likeable, if not slightly bland, upgraded version of Bella Swan.

Movie Anna is horribly awkward, absurdly funny, and generally a strong, open-minded woman. She’s not really relatable because she doesn’t have many interests outside of Christian in the film, but Dakota Johnson had great source material from the screenplay, and she played her comedic moments perfectly.

Anna is the hero of the movie. She gets it right in the end, even if she doesn’t recognize exactly what’s right or wrong with her relationship at the beginning. She’s written stronger on film than either of her literary counterparts, and that’s why I’ll stand by this film.

Final Thoughts: I rooted for Fifty Shades to fail before I saw it. I knew that it was going to succeed whether or not it was a watchable film. The only question was how much it would succeed. Now that I know that it’s actually very good, I know that this film is going to be huge.