With construction underway at the Jacob K. Javits center, New York Comic Con is more spread out than ever before! This year, besides the convention center, there are three other venues hosting panels, events, and more: The Hammerstein Ballroom, the theatre at Madison Square Garden, and Hudson Mercantile.

While this means more spaces for fans, it also means more places to keep track of and each of those places comes with a slightly different set of rules. We’ve highlighted the differences between the venues, what you can expect, and what you can find at each of the four main hubs of New York Comic Con 2017!

But first and foremost, know that NYCC has a strict ZERO TOLERANCE POLICY for harassment. Be aware that hate symbols are not permitted at New York Comic Con (NYCC), including as part of cosplay, and NYCC will not allow costumes that contain hate symbols or appropriate the symbolism of hate groups, including, but not limited to, historical/comic-related/satirical costumes that are associated with Nazis.

Remember that cosplay does not equal consent and anyone may report harassment to NYCC Staff, Security Team, or a Crew Member, as well as at NYCC’s Show Office or via the NYCC App. There is an Anti-Harassment Policy icon that you tap and the app will walk you through filing a report.

With that out of the way, let’s get into venue specifics.

Once inside, attendees head through a quick bag. We’ve never had trouble bringing food or water inside and we recommend it for anyone who doesn’t want to break the bank on convention center food or food trucks. Leave your drones and selfie-sticks at home or they’ll be left at security. Javits also has a coat check for anyone coming from or heading straight to another destination. It’s $3.00 an item.

Every day, your cosplay weapons will have to go through an extra screening and will be tagged with a new color-specific band. To get your weapon checked, head to the entrance tent on the Inner Roadway as well as the Crystal Palace. Read below for any other specific modifications you will have to make to your cosplay to ensure that you can bring it into the convention center.

Javits also offers a few specific rooms for attendees to take advantage of, including:

Located at 311 West 34th Street, between 8th and 9th Avenues, New York, NY 10001, The Hammerstein Ballroom is going to have some amazing programming throughout the weekend. Television fans are going to find at least one or two must-see panels there (Steven Universe, anyone?). Head straight there in the morning with your badge, no need to stop by Javits first.

New York Comic Con recommends that you begin queuing no earlier than 8:00 AM for panels that you wish to see there. The queue will form outside the Hammerstein Ballroom. The doors will open Thursday at 10:15 AM, Friday and Saturday at 9:45 AM, and Sunday at 10:15 AM. Seating is first come, first served and the room is not cleared between panels.

You can read the general venue rules of the Manhattan Center on their website, but they are similar to Javits. From the website, “All persons and bags are subject to search. Oversize bags are prohibited.” They note there is an area to check bags and personal belongings, but that may not be true during NYCC and I have never been there to experience it personally.

New York Comic Con reminds attendees that no water or outside food can be brought into Hammerstein, but a glance at their Prohibited Items list is much longer and includes plenty of convention staples. Umbrellas are also not allowed, but things like cameras, permanent markers, and cosplay materials may also need to be kept tucked away.

A massive venue, which is about a twenty minute walk from Javits, will hold some of the most highly anticipated panels of the convention on Friday and Saturday only. Like Hammerstein, you can head straight to Madison Square Garden in the morning with your badge and it’s not cleared between panels – though it’s large enough that most anyone who wants to be there is going to fit. Also, this is another venue where no outside food or drink is allowed.

ReedPOP recommends fans take W 31st St. to 7th Ave., which will lead directly to the queue locations. There will be two morning queue locations for entry into the building, the South Concourse and North Concourse. The queues will open at approximately 8:00 AM on Friday and Saturday and Staff will be onsite to direct you into the queues. NYCC strongly discourages overnight camping.

There will also be a reserved section for anyone who needs Medical Assistance at Madison Square Garden. However, ReedPOP notes that the Medical Assistance queue does not provide you with the ability to skip the line and does not guarantee seating or entry, but provides a queue separate from the main crowd fort those who require Medical Assistance. There will be seating for fans in wheelchairs or scooters, but it is limited and you will only be able to sit with one member of your party.

Also make a note that the theatre at Madison Square Garden has their own cosplay rules. You can view them on their site here or read them below. 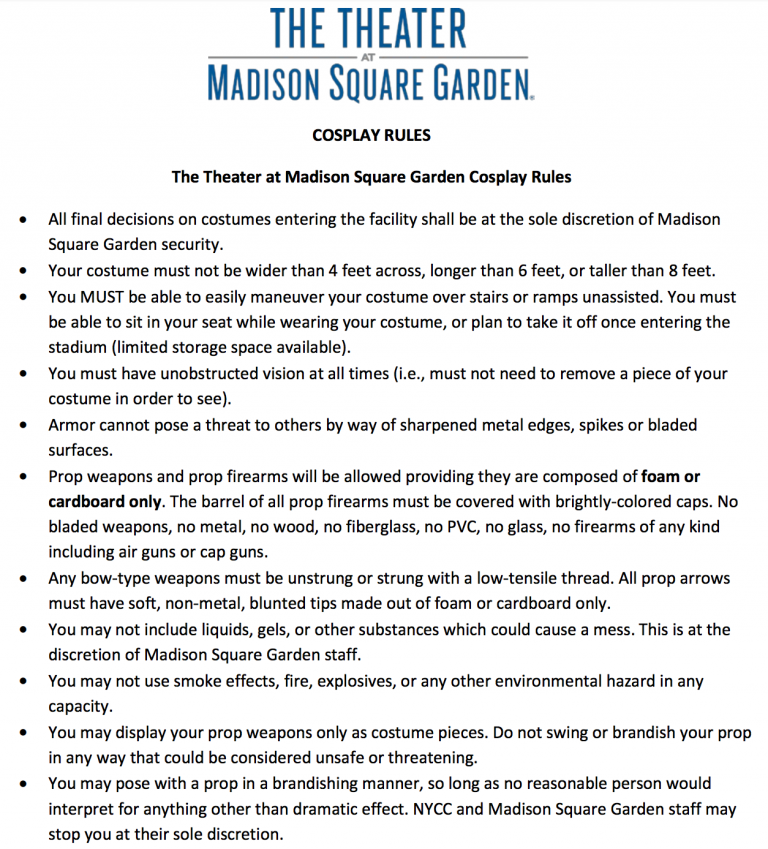 The Hudson Mercantile is a tricky venue, located at 500 West 36th Street, because it requires no NYCC badge at all on the first floor. The first floor is a pop-up Strand Bookstore with a lounge, photo booth, and charging stations, while the second floor does require a NYCC badge or a purchased ticket. During the day, the second floor of the venue is host to some amazing panels with talent like Ta-Nehisi Coates, R. L. Stine, and the McElroy brothers, but in the evenings and for some daytime panels, it becomes separate ticketed events.

You can get an idea of what the venue might look like here, but as long as you are careful and respectful of the retail space, there doesn’t seem to be any rules about outside food or beverages. This could be a hit or miss relaxation space, given that the first floor is open to the general public, but the second floor may just be a hidden gem of time spent with some of your favorite creators.

One of the biggest venues that didn’t need its own category is the New York Public Library, which is partnering with NYCC to expand offerings for educators and librarians  by providing them with an exclusive space for panels, networking, and workshops on Thursday, October 5. Professional Badge holders will be given priority access, but the first 250 attendees to tap their badges in the morning are guaranteed a NYPL goodie bag with items from featured panel organizers.

Entrance is through the main entrance of the NYPL on 5th Ave. and there will be complimentary coffee and light refreshments offered in the morning and early afternoon. You do not need to head to Javits first and you can see all of the panels and planned events on Thursday right here.

NYCC Presents is the after-hours offerings from ReedPOP and New York Comic Con, though most venues are spread out and you have to pay a separate fee for tickets. The Ecoin Launch Party (which is now waitlisted) and the Flame ON! Live event were the only free offerings.

An Evening With Mark Hamill is considered an NYCC Presents event, as are the many Star Wars In Concert events – which are being held at the David Geffen Hall. Other venues, though they’re only hosting one or two events throughout the convention weekend include: the Lincoln Center, BB King Blues Club, Alamo Drafthouse, Rock Bar NYC, and a ton more.

If you’re headed to a venue that you don’t see listed here or you have a question about whether something may or may not be allowed in, take a look at the venue’s specific rules to see if that clears up the policies in place during NYCC. Remember, it’s always better to be safe than sorry!