“Narcos” Explores the Post-Escobar Era in Season 3: A Review of Episodes 6 – 10 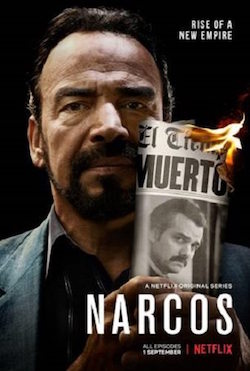 
Rating:
One of the highlights of the third season of Narcos has been the soundtrack. Episode six opens with an accidental explosion at Chepe’s newly acquired beauty salon drug front (cooking up coke is volatile science, the type of work perhaps not best suited for coked-out lackeys), scored by Jeru tha Damaja’s “Come Clean”—a single from the rapper’s 1994 debut The Sun Rises in the East.

Escobar’s murder—at the end of 1993, just a month after the release of Wu-Tang Clan’s Enter the Wu-Tang (36 Chambers)—is the inciting event of season three. The haunting realism of Rap’s Golden Age serves as the perfect backdrop for the post-Escobar era and the scenes depicting Chepe’s Rap-scored New York operation are the touchstone of this season—a storyline that orients us in the world outside of Colombia as affected by the death of Pablo Escobar and the rise of the Cali Cartel.

Jorge Salcedo is the cartel’s newly appointed chief of security following the brutal murder of his former boss. We pick up with Jorge in the wake of the horrific encounter with cartel justice that finally convinced him to turn for the DEA in episode six. In the first scene after the credits roll, Jorge meets with Feistl and Van Ness and makes his demands for full immunity and safe passage to the U.S. for himself and his family. Feistl and Van Ness play hardball and send him on his way to collect more intel with an empty promise of protection from the cartel.

Later in the episode, the plan to capture Franklin Jurado, the cartel’s primary money launderer, is presented. A brief history lesson on colonialism in the Caribbean narrated by Peña details the layers of complexity involved in the extradition of cartel operatives on the island of Curaçao. Meanwhile, the cartel’s peaceful and mutually beneficial surrender has been compromised by the arrest of their leader and news reports linking the New York coke lab explosion with their operation.

Episode seven sees another major raid of the Cali Cartel. This time, the DEA, with the assistance of Jorge Salcedo, is knocking down the doors, and eventually the walls, of Miguel Rodriguez Orejuela’s hideout. After a frantic search of the apartment where Miguel is hiding, and coming within literal inches of discovering him in his crawl space hideout, the raid is abruptly canceled by Cali’s compromised district attorney for being improperly carried out.

Miguel will eventually be arrested in episode ten, but only after Peña discovers that the president of Colombia has a vested interest in keeping the Rodriguez brothers out of prison. Moments before Miguel’s arrest, Jorge is revealed to be the rat and has a close call with a plastic bag and a roomful of Cali gangsters, just barely escaping as the DEA come crashing in.

Meanwhile, the DEA has captured Jurado, who later takes a shank to the neck for his cooperation—leaving Pallomari as the sole liability in the cartel’s plan for a cushy surrender. It isn’t until Pallomari is taken in that Miguel’s warped vision of the American Dream is finally deflated.

The final episode of Narcos does an excellent job of tying up all the loose ends. Pacho gets revenge against the Norte Valle, again—this time for the shooting of his brother—before surrendering himself to Colombian authorities. Later, Chepe surrenders as well but eventually breaks out. After teaming up with the lunatic paramilitary commando Castaño brothers, he heads back to New York and starts his own operation.

Both Pacho and Chepe are eventually killed in Cartel-related beefs (Pacho at the hands of the Norte Valle crew and Chepe in a double-cross by the Castaños). The Rodriguez brothers meanwhile will spend the rest of their lives in a U.S. prison, thanks to Pallomari’s testimony.

Salcedo and his family surprisingly survive his betrayal of the cartel. Less surprising, however, is the abysmal ending to his story, as we leave him at the end of the final episode working as a mechanic under witness protection somewhere in America.

With the Cali Cartel dissolved, Peña finally gets a glimmer of the justice he’s sought since season one and turns in his badge. And, as a final middle finger to the U.S. government, he also goes public with details implicating the very agencies tasked with fighting the War on Drugs in its perpetuation.

Peña’s fleeting moments of righteous indignation over America’s complicity in the horrors of the War on Drugs notwithstanding, the series ends just short of actually saying something meaningful about the motivations of that war. What is the “next battle—the one that really counts” that Stechner mentioned earlier in the season? Why was it so difficult for Peña to deliver justice to the Cartel? Are the perpetrators of the more sinister implications of that war who we actually believe them to be?

Those questions, perhaps, are best left for us to answer ourselves.