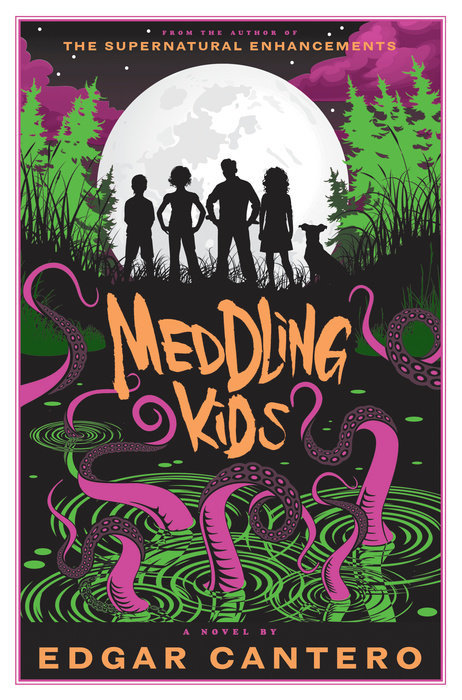 
Rating:
Let’s have a show of hands: who didn’t want to be a part of the Scooby Gang growing up? Like a lot of you, I watched Scooby-Doo all the time as a kid and I loved the idea of talking dogs, crazy ghouls, and solving mysteries. In Meddling Kids, Edgar Cantero imagines what what it would really be like for a group of kids to live the Scooby-Do life for real… and then what would happen to them when they grew up.

The titular Meddling Kids are a group that were once known as The Blyton Summer Detectives Club. Every summer they came together and solved all kinds of mysteries through quick thinking and MacGuyver-style ingenuity. But while all of these kids showed a lot of early promise, their adult lives are effectively train wrecks.

They’ve amounted to pretty much nothing. One of them is dead, one of them is a wanted criminal, one of them has been institutionalized most of his adult life, one is a genius burnout, and… well, there’s one of them that is still just a dog. (Not the same dog. Don’t be silly.)  Also, the dead one is still hanging around in the form of another’s unwanted hallucinations.

How’s that for a screwed up, grown-up Scooby Gang?

The basic premise behind the story is that their very last case was never really solved. They sent an innocent man to jail and he happily went because the truth was far worse and far weirder than anyone could have expected. And so, years later, these kids come together again to figure out what’s really going on back in Blyton – a town that hasn’t faired much better than they have. In doing so, they embark on a dangerous adventure filled with dark secrets and Lovecraftian nightmares.

I don’t want to give too much away, but it’s one heck of an entertaining read and I thought the ending was incredibly satisfying.

That said, Meddling Kids has a unique tone and you’ll want to be aware of that going in. There were times that, as much as I enjoyed the story, I still struggled to read through it. The writing style isn’t for everyone and even those who like it may be a little turned off by the random, frequent switches from prose to scripted dialogue. If you can get through it, though, it really is a great story.

Meddling Kids is not a book that takes itself particularly seriously and I liked that. Humor and horror can be great together and, while at times the execution in the writing felt flat for me, the story was still awesome. The book is full of humor and homages to every aspect of the horror genre you could imagine.

Obviously, there are heavy Lovecraftian overtones. But all throughout the book they reference any number of iconic films, series, and more. For example, numerous iconic, horror-related locations are portrayed as real places – like Arkham, Massachusetts and Raccoon City.

If you can get past the easy-going, sometimes eccentric prose you’ll find a really entertaining story that blends horror and humor with the cartoon-inspired concept of teenage detectives. I loved the characters and the way Cantero turns their stereotypical origins on their heads. And I really liked how the story unfolded with it’s throwback to the classic Saturday morning cartoons that inspired it.

Meddling Kids is a great take on it’s varied genres and as long as you’re a horror fan who doesn’t take the genre too seriously you should enjoy it!