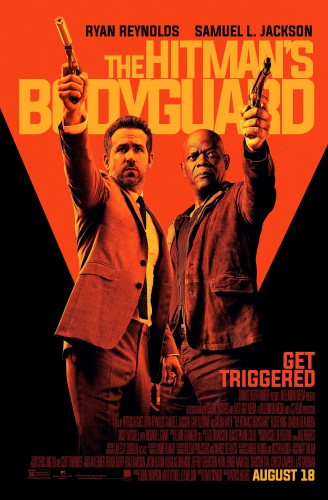 Ryan Reynolds: Hitman. No wait, that’s Deadpool. Ryan Reynolds: Bodyguard, Michael Bryce. An AAA Executive Protection Agent. Samuel L. Jackson: Hitman, Darius Kincaid. The most notorious hired killer on the planet. Gary Oldman: Bad Guy. Kincaid is in prison and being transported to testify against Gary Oldman, a bad guy Belarusian dictator at the International Court of Justice. Bryce is the man to get him from England to The Hague. Ok, you know just about everything you need to know to start.

It’s a not-so buddy comedy featuring two of the absolute most charismatic actors of the era taking the piss out of each other over two hours. And damn it, it’s a delight! The movie is packed with jokes, guns, blood splatters, and motherfuckas. Everything you would expect from an R-Rated Samuel L. Jackson joint.

The movie doesn’t have a particularly strong story, and the villain is a two-dimensional card board cut out Bad Guy, but it’s clear that movie isn’t trying too hard in those departments. It’s relying on the leads to provide the fun and it works.

The road trip movie is turned on its ear as Reynolds and Jackson gunfight their way out of buildings, steal cars, shoot their way through the streets of Amsterdam, and more. Whether it is a complaint or a boon depends on your opinion, but Reynolds and Jackson both aren’t really playing characters of course. It’s more like they’ve taken their personas and amplified them.

The movie’s action looks good, though at times it appears to be heavily CGI’d and, in some cases, it definitely isn’t, which makes for some weird shots. Reynolds sitting at an outdoor bar as the world explodes around him being one. It looks so clearly green screened and yet, as a mid credit blooper reveals is real.

The gun fights are bloody, with every shot ending in a big squib burst from the bad guys’ bodies. A final fist fight between Reynolds and main henchman in a hardware store is especially kinetic and fun. There are also a fun smattering of slo-mo action that are surprisingly cute. Yeah. I said cute.

If you like the actors, chances are you are gonna enjoy this movie just fine. It is a lot of fun, if nothing special.