KFC Is No Chicken When It Comes To Comics

Well, KFC has done it again. The fast food giants gave us something we didn’t know we wanted until they gave it to us. Much like the Double Down, you don’t think you’ll like the comics they have released until that first bite.

Packed with flavor, juicy plot, and great artwork, the plight of Colonel Sanders and The Flash against the evil Colonel Sunder and his evil ways are comics that you really don’t want to miss. This set of three comics are crisp and not for those who are a bit chicken when it comes to something new. So let’s get on with it, and check out the trio of Kentucky fried comics. 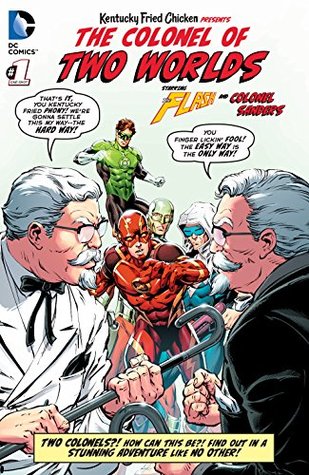 Here we are introduced to the slightly strange relationship between The Flash, Green Lantern, and Colonel Sanders. But before we jump into that, let’s start at the beginning. Straight from Earth-3, Colonel Sunder, the evil mirror version of Colonel Sanders, has come over to take over the fast food industry. With his cheap and easy ways, he wreaks havoc on the good name and reputation of KFC and Colonel Sanders. Using his henchmen to rob banks and work his store, it seems the easy way is the best way for the dastardly Colonel Sunder.

Colonel Sanders has had enough and meets The Flash and Green Lantern on the way to take care of matters himself. After teaching Colonel Sunder a thing or two about how the hard way is the right way, and with a little assistance from his superhero buddies, Sanders reforms the dirty, no-good Captain Cold and Mirror Master. 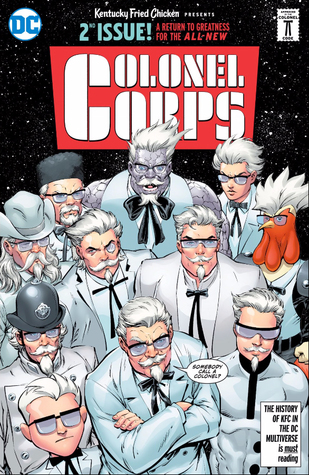 Colonel Sunder is at it again in the second installment. When Colonel Sanders wakes from a sudden black out, he is greeted by the Colonel from Earth-11 and that world’s Flash. He is then taken on the ride of his life as they go and find the remaining Colonels to try to rebuild the famous recipe that has all but vanished from each of their minds.

Once gathered, the Colonels head to Earth-3 to take on Colonel Sunder and his new partner, Colonel Grodd. Once again learning that the easy way does not pay, Sunder is tossed in the trash faster than a burned biscuit. While this comic doesn’t show us more of Green Lantern, we do get to meet the other world versions of The Flash, including the Teen Titan Earth-29 (Bizarro World), and Earth-51 (Post-Apocalypse) versions. 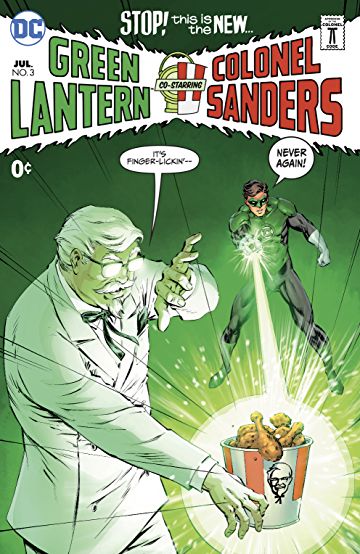 In the most recent installment, Green Lantern teams up with Colonel Sanders to help distribute the new chicken zingers to every end of the universe. With the assistance of all of the other Lanterns, they come up with a plan to send the sandwiches to everyone.

However, those plans are thwarted by a new dastardly foe. After traveling the universe side by side to find the one who stole all the zingers, Green Lantern, and the Colonel finds Larfleeze at the center of all the trouble. After a bit of smooth talking and contract negotiation, Larfleeze is defeated and served a bit of Kentucky Fried Justice.

This is an interesting experiment in turning what are essentially very long advertisements into a more palatable form. The dialogue is understandably cheesy, with the need to insert the corporate slogan as much as possible. The plots of the books are interesting in the sense of I laughed frequently at the terrible puns and thinly veiled marketing.

Truly it is nothing to call home about, but redeeming the comics are the artwork and coloring, beautifully drawn and realized in true DC form. All in the very distinctive DC style of chiseled bodies and hard lines, the finger-licking good quality of that gives the comics its best moments.

While these won’t be everyone’s bucket of chicken, they are free on Comixology. The best parts by far are the “Letters to the Colonel” and adverts at the end of the comics. Reminiscent of older comics, they bring a light hearted final laugh.

All in all, I can honestly say I didn’t hate these. They were delectable short stories and accomplished what they set out to do. Who doesn’t like seeing a little Kentucky Fried Justice served up with sides of hard work and fair play?And after reading all three in one sitting, I’m left with the same question as before, can I have a biscuit for reading these works?