‘Pigs Might Fly’ is an Incredible Read Full of Science, Magic, and High Flying Swine! 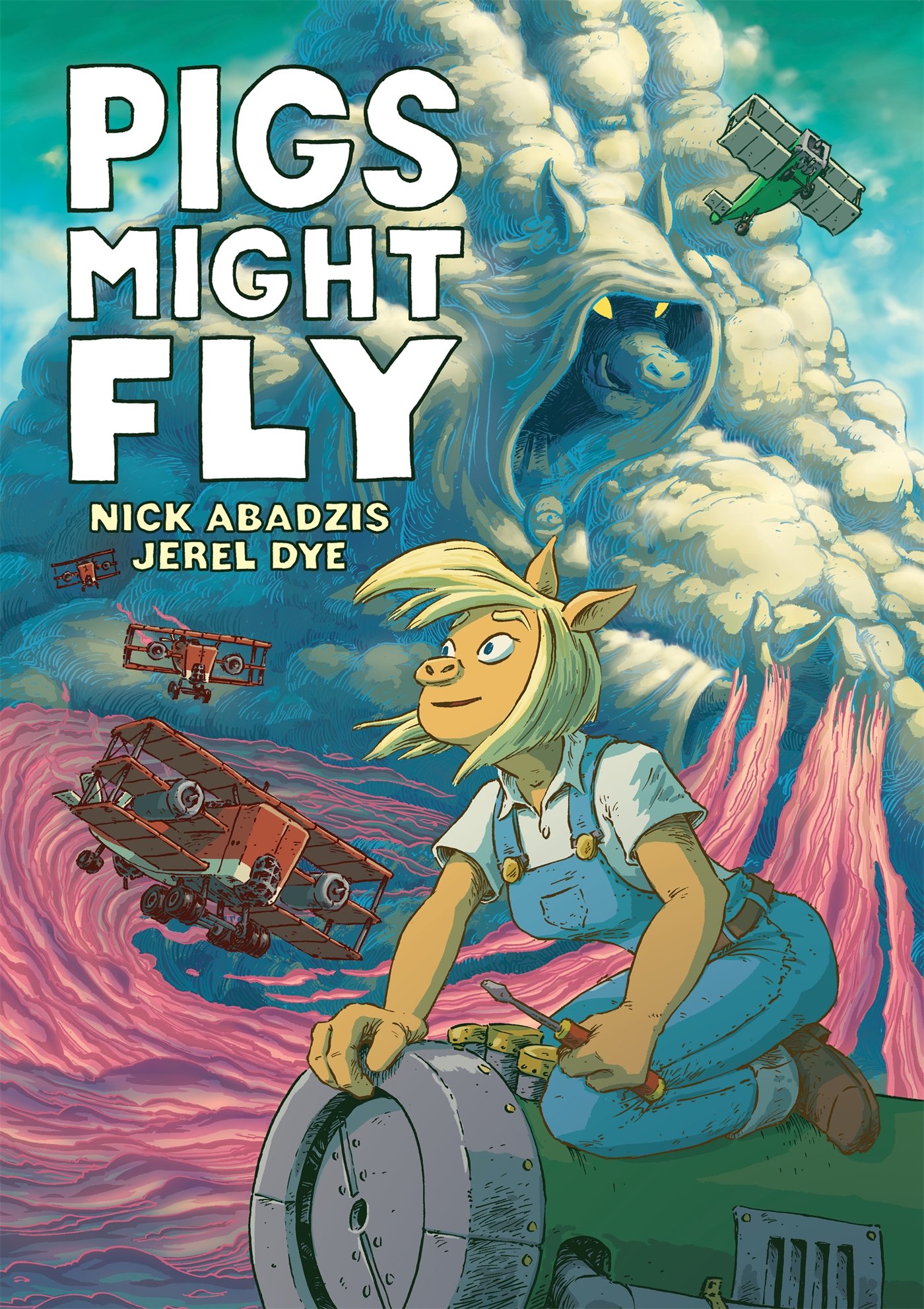 
Rating:
Pigs Might Fly is probably the most unexpectedly great graphic novel I’ve read this year. Don’t get me wrong, I loved the premise from the start. Who doesn’t love the idea of a strong, intelligent young woman saving the day through science? But I couldn’t have know just how much I would enjoy the story and the characters. Pigs Might Fly is a book that’s stuck with me even weeks after I read it. I liked it that much.

The book takes place in a fictional world where swine of all kinds have evolved similarly to the way humans have. Basically you’ve got pigkind instead of mankind. Lily Leanchops and her family live in the Pigdom Plains, a peaceful kingdom full of pigs, where magic and science exist in tandem. Her father is a well-known scientist who dreams of building a flying machine that can fly on its own without any magic. Lily shares that dream but, in some misguided attempt to keep her safe, her father refuses to let her help him.

That, of course, doesn’t stop Lily. She enlists her cousin Archie to help her and together they manage to do what her father cannot. They build a plane that can fly without magic. And her breakthrough couldn’t have come soon enough. Shortly after she takes flight the kingdom begins to see raid after raid by villainous warthogs in their own dangerous flying machines. But even then her father won’t listen to her.

Ultimately, Lily takes it upon herself to save the Pigdom Plains.

Along the way she finds her own prejudices against warthogs challenged and she finds herself teaming up with some unexpected allies. The book also tackles some other big issues. Not the least of those is Lily reconciling her relationship with her father. Hercules Fatchops is a great character and a great scientist, but his failings as a father and his inability to see Lily as anything but a child causes problems throughout the book.

One of the things I liked the most about the story was how magic and science existed together in this world.

Oftentimes in fantasy stories we see magic taking precedence over science. But in the Pigdom Plains magic is more of an occasional tool. And its use does not preclude people from taking up scientific endeavors. I loved how this relationship was shown through Hercules and his sister Sasha – and to a similar degree through Lily and Archie. Hercules and Lily are scientists but they love and rely on the people in their family who instead focused on the magical arts.

I really just enjoyed the world building in general. At the very beginning of the book there is a two-page spread with a map of the Pigdom Plains. There are so many puns in the various town names it’s ridiculous. The same sly humor finds its way into the characters’ names, too. We have Lily Leanchops, Hercules Fatchops, and Ham Trotters to name a few. Also, the ‘Prime Minister’ is a Pigminister. It’s just a fun little addition to what generally is a fairly serious plot.

Jerel Dye did a great job bringing the anthropomorphic pigkind to life. The character designs were all very well done and fit the characters perfectly. I liked how he worked out the differences between the pigs, warthogs, and other porcine characters. He did a good job of incorporating their distinct characteristics into the ‘humanoid’ figure. There were a lot of little details that might easily be missed – like the little tusks that the pigs have that pop up from time to time. I don’t know why but that detail really stuck out to me.

Pigs Might Fly is a great graphic novel for readers of all ages. While I could see it primarily interesting young adult readers – especially with it’s misunderstood, teen heroine – there’s a lot of crossover appeal for older readers, too. Lily is a wonderful heroine whose determination and engineering prowess will inspire readers. And the story will keep readers hooked and wanting more. I highly recommend Pigs Might Fly to anyone who loves a good mix of fantasy, science, strong female characters, and incredible world building!