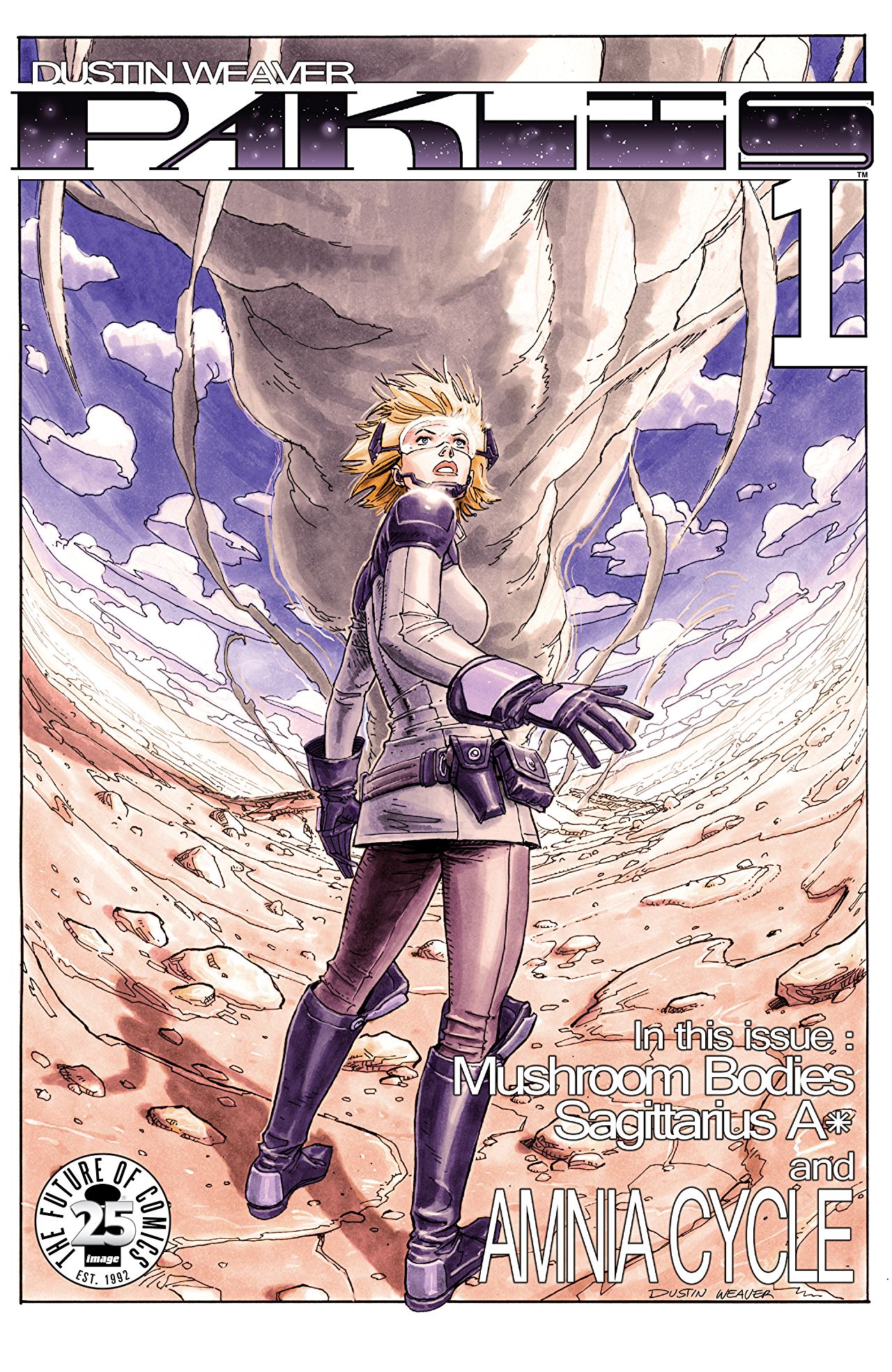 Dustin Weaver has been one of the most consistently fascinating American comics artists since he exploded on the scene at Dark Horse before migrating to Marvel, bringing a sharp manga-influenced sense of scale and detail to classic American icons like Star Wars and X-Men. He’s managed to maintain an unbelievable sense of hype, despite almost completely disappearing from comics racks ever since the near endless delays on his SHIELD miniseries with writer Jonathan Hickman, reappearing only for a “Secret Wars” tie-in mini and an Evangelion influenced one-shot connected to the “Spider-Verse” crossover in 2014.

His choice in those projects, as well as ones outside Marvel, lend themselves to seeing Weaver as frustrated with more straightforward superhero stories and narrative, something his haphazard release schedules seems to corroborate.

Weaver’s upfront about his frustrations with the limitations of working for Marvel in Paklis #1, a new anthology book published by Image and named after his home studio. He writes about the difficulty in working on SHIELD and channeling those frustrations into intensely personal, surrealist stories here. As such, Paklis #1 feels like nothing Weaver has done before. It’s a brutally confrontational comic, one that actively works to repulse, confuse, and astound and it succeeds mightily, although readers couldn’t be blamed for being put off by the frankness and occasionally stomach-churning horror here.

If there’s a theme to Paklis #1, it’s our inability to fully know those closest to us. “Mushroom Bodies,” a disgusting riff on David Lynch’s Inland Empire by way of Franz Kafka’s The Metamorphosis and Junji Ito’s Gyo plays on the protagonist’s nightmare of monogamy, sexual disfunction, and inadequacy as he prepares to get married.

“Amnia Cycle,” which forms the back half of the issue focuses on the line between love, hate, and obsession on a cosmic battlefield where the lines of the front are constantly being redrawn and loyalties are regularly questioned.

Both stories, as well as two pages of a mini-comic called “Sagitarius A*,” play on that Lynchian sense of throwing the reader into a world they’re not fully able to comprehend, where darkness is just out of sight but constantly creeping in the borders of perception. It’s all wonderfully drawn, albeit much looser than Weaver’s work in years past, and the scripts maintain the horror and drama of a lucid dream, where breathtaking vistas can turn into nightmares at a moment’s notice.

Paklis #1 feels intensely personal and unrestrained by corporate requirements in a way that even indie comics rarely actually succeed in being, an up close and personal look at the influences and fascinations of one creator. It earns a recommendation if nothing else for the creeping horror of Weaver’s pencils and script on “Mushroom Bodies” but offers plenty more for the asking price. Paklis #1 is a clear, uncut look at one of American comics’ most fascinating, idiosyncratic artists and that’s something that demands attention.