Digimon Adventure Tri Reunion is a Guaranteed Fan Treat, But Nothing More 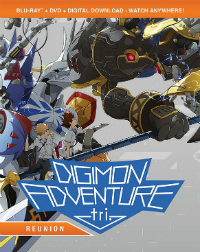 Come on, you know the rest. Let your nerd flag fly, no one has to know. If you don’t know the rest, then allow me to introduce you to one of the most iconic anime continuities of the past few decades. On May 16th, Digimon Adventure Tri Reunion will be hitting American and Canadian shelves, so it’s time to brush up on the facts.

Digimon came into popularity a mere year after the legendary Pokemon series. With similar roots in digital origins, the two have been forever linked.

Digimon Adventure followed a group of young children trying to return home after saving a digital world with the help of digital monsters, that can go zero to 100 real quick. The argument for which series came first has been uprooted by the argument for which is better, only due to the finality that Google has lent to the former. The Digimon world has not seen a new film entry since 2000, so the odds were stacked high against it. Reunion is the first in a series of five films, four of which have already seen theatrical releases.

Digimon Adventure Tri Reunion is Nostalgia with a Dash of Modernization

If you’re a fan of Digimon, you’re flying high on nostalgia the second you start the film, but for no particular reason. Just seeing the characters again feels like a (yep I’m going to say it) reunion you didn’t know you were waiting for and that’s exactly what the director, Keitaro Motonaga, was going for. Like running into old childhood friends you had forgotten about because you’ve been busy living your life. All of a sudden you feel guilty for having forgotten them in the first place, especially since they greet you with uninhibited warmth. Don’t let the nostalgia blind you.

It’s great to see them again and maybe you’ll even attempt to reconnect, but it won’t go far. You’ve both changed, so much for forging a long-lasting bond, but give it a shot anyway for old time’s sake.

A Few New Digimon, but You Gotta Love the Classics

Everyone’s there and accounted for from the original series. Every digi-destined and Digimon partner come together as if they never left. Seeing them defeat the enemies was a pleasant nod to the past, but it failed to do much more. The fights weren’t exactly anything new and, other than Tai’s radically different attitude towards fighting, they lacked substance.

We meet a new character, as well as a few new Digimon, but they serve no purpose other than flapping in the wind and beginning the game of chess that will be Digimon Adventure Tri.

As I mentioned earlier, Tai’s not feeling quite himself. For no discernible reason, he’s become very conscious of the unintentional destruction that Digimon can inflict on the real world. While I appreciate the change in his character and it represents a more mature outlook, WHERE’D IT COME FROM?!

I guess he’s able to notice the destruction more than he could in his youth due to his more developed mindset, but it still seems to lack true weight behind it.

That being said, there’s a role reversal between Tai and Matt, the chronic head-butters of the original series. The romance between characters is also slightly more pronounced, which is reasonable considering that they’re in the age where romance buds like the flowers of spring.

A Little Too Familiar for My Tastes

The connection between the digital world and the real world has always been a core concept in the Digimon universe. But really, how many times can you use the same formula before it’s too stale to enjoy?

This film isn’t the first time that the digital world has bled into the real world, but the film sure likes to act like it. Giving the creatures a different door into our world and saying that their entry through it is driving them crazy SCREAMS, “We’re out of ideas, so let’s recycle our old ones and see if they notice!”

It didn’t kill the experience for me, but I failed to see how this was any different from the countless times it’s happened before. The only saving grace is the hope that the later films will reveal a more original and intricate plot.

This month we were lucky enough to speak with Joshua Seth, the voice of Tai Kamiya in the original Digimon series and the new films. See what he had to say about the film, peppered with other revealing details here.

Nostalgia is the word of the day here. There wouldn’t be much reason for this film without it, but the film relies on it too heavily and without adding anything new. I’m waiting to see what the other Digimon Adventure Tri films bring, but until then I’m holding out for something better.