‘Pilot X’ is A Unique, Challenging Read Perfect for Those Who Love Time Travel

A REVIEW COPY OF PILOT X WAS PROVIDED BY THE PUBLISHER IN EXCHANGE FOR A FAIR AND HONEST REVIEW. NERDOPHILES WAS NOT COMPENSATED FOR THIS REVIEW. OUR OPINIONS ARE OURS AND OURS ALONE. 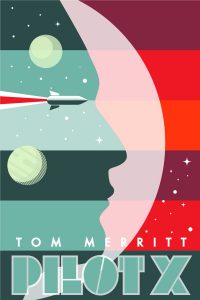 
Rating:
Before I get too far into this review, I want to say something to you all: don’t read too much of the official synopsis. I started reading this book without even reading the back cover and I think that was the best way to do it. I went in blind, knowing little more than that this was a science fiction book about time travel. I got to discover what was going to come on my own. Or, rather, I was told by Pilot X himself – and that made a huge difference in how much I was able to enjoy this book.

Pilot X is a challenging read for a lot of reasons but ultimately, its probably my favorite book from Inkshares to date just because it’s so unique.

Time travel is a tricky genre. It’s an equally tricky concept in general. While we’re all familiar with the idea of time travel, it can be difficult to wrap your head around it sometimes – especially when it’s integral to a particular story. Sometimes time travel is merely a frame through which to tell a story and the creator is perfectly happy just letting it happen without much explanation. Others develop convoluted rules to keep themselves and the story in check. Pilot X is something of the later.

It’s a story that would not exist without time travel. But instead of focusing on just the time travel itself, author Tom Merritt creates a universe where time travel is simply a part of life. The titular character, Pilot X (who later takes on other titles besides just Pilot), is a member of a race that has mastered time. The Alendans can move freely across both time and space in specially engineered ships and Merritt creates a whole universe where this is seen as normal.

A lot of detail went into the world building necessary for this novel to work and, if nothing else, readers will appreciate that. There is a real dedication to the craft in Pilot X. Merritt does a good job of making alien cultures feel sufficiently alien and enigmatic. The aliens and cultures the Alendans http://www.montauk-monster.com/pharmacy/nexium cross paths with (and especially the two in which they are embroiled in a never ending time war) feel distinctive. And the conflicts between races and those within the Alendan society feel intricate and well thought out.

Unfortunately, it can be a little hard to juggle everything.

There is some really serious political/societal upheaval going on throughout this book and poor Pilot X finds himself wrapped up in all of it – like it or not. And, to be fair, he does at first. When he starts to realize that people from the future are regarding him with more credit than he’s due at a particular time, he gets excited. We all do. We want to know what comes next.

But what comes next isn’t all that simple. Nor is it always that easy to follow. Pilot X gets wrapped up in all kinds of crazy, secretive things going on behind the curtains. He makes discoveries about his own people and is forced to make difficult decisions that change the face of the universe and time as it’s known forever. The journey there is filled with training, diplomatic missions, betrayal, and more. And while it’s an entertaining ride it’s also a challenging one.

It doesn’t help that besides Pilot X and his ship, Verity, it’s hard to really connect with or care about the characters. Still, Pilot X has a very unique voice and perspective. He’s grown up in a world so unlike our own and while he’s seems mostly familiar, at times it’s very obvious how different his perspective on this can be. Pilot X is what made this book so memorable for me. His journey – from ambitious pilot until the end when he’s a man faced with some very difficult, universe-shattering choices – is engaging regardless of how complex and complicated it might be at a certain point.

I really have to hand it to Merritt.

He makes a challenging read more than worth it.

Fans of time travel and science fiction who don’t mind a few complex twists are going to really enjoy this book. Casual readers might struggle with it a bit and the less interesting parts may cause them to run out early. But for those who stick it out, Pilot X is an entertaining, at times thought provoking read!