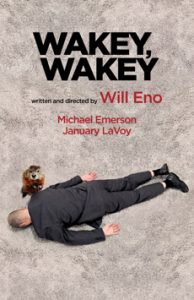 
Rating:
The greatest existentialists in history would probably not have been able to better summarize the end of life than Will Eno in his production titled Wakey Wakey. The premise is this: a nameless man faces his last hours of life and decides to share his experience with the audience. Accompanied only in the back half of the play by a hospice worker, the piece focuses on the connection between Michael Emerson’s dying character and the audience.

With great humor, the character muses about his past, his present, and what the future looks like. At times his train of thought derails and he jumps from one topic to another, lost in his own mind. Synapses pulse and his hippocampus works overtime as he does the only thing a dying man can do: reflect. Except what could be considered a rather dull monologue becomes a bright, living conversation as he engages the audience not only with his words, but with a powerpoint presentation, music, and other sounds.

The lack of a fourth wall allows the audience to participate in a meditating exercise and pulls them into the scene. Sounds from speakers around the room truly immerse watchers-turned-participators into Emerson’s character’s world. While he faces the crisis that only the end of life and a failing human body can bring the audience is invited to share in the experience and glean from him what wisdom he can share.

Michael Emerson knocked it out of the park through both his words and actions as he candidly explored what it looks like when the body and mind begin to break down. Most notably however was January LaVoy’s performance in the back half of the play. She was his hospice worker, tasked to keep him company and to keep him comfortable in his last moments. LaVoy perfectly embodied the spirit of a hospice worker, representing the hard work of people whose careers are based around helping ease others into death.

She carried the weight of the task set before her with grace and a spirit that I believe helped ground the audience and made everyone feel okay. LaVoy’s calm, steady presence was a glass of cold water in the midst of hot anxiety and provided the necessary counterbalance to Emerson’s good humored chaos.

Will Eno took on the concept of death and dying and somehow made it funny, without taking away from the weight that a person’s death has on them and those around them. He explored in a very real way what our last moments are like and shared in both the sorrow and celebration that the end of life can bring. Wakey Wakey, though at times heartbreaking to witness, leaves the audience with a profound sense of hope and, humorously, a t-shirt on their way out.

Wakey Wakey’s run has been extended through April 2nd at Signature Theatre.

Get your tickets today.