The Great Wall: Come for the Architecture, Stay for the Monsters 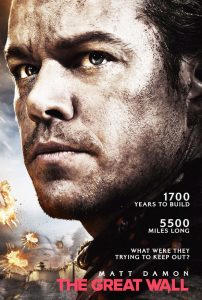 The Great Wall is the latest Matt Damon vehicle, this time brought to us by Chinese director Zhang Yimou of Hero and House of Flying Daggers fame, among many others. The movie tells the legend of the purpose of the Great Wall, following two European mercenaries, Matt Damon and Pedro Pascal (as William and Tovar respectively) as they quest for fabled black powder. But when they reach the wall they get a whole lot more than they bargained for. And straight up? That’s like, 4 minutes into this movie. This movie starts quick.

This movie has just about all the things you could expect in a fantasy flick, at minimum. There’s some cool, if mostly one dimensional characters, there’s a (simple) quest, there are very cool weapons and armor, a siege, explosions… Oh, and aliens! That’s right.

So is the acting stellar? No, of course not. Damon has a strange accent that comes and goes throughout, Pedro Pascal gets to play rugged rogue friend fine and Willem Dafoe is in the movie doing Dafoe stuff, but not with any particular gusto. Jing Tian, who seems to be Legendary Pictures It Girl as she’ll be in upcoming Kong: Skull Island and Pacific Rim: Uprising, plays a veteran soldier… about as okay as can be.

No one is groan-worthy bad, but no one shines either. Is the action then exceptional? At times, there are a lot of action scenes to be had, and while none of them wow with originality, it is fun to see so many thing slopped together. Bow and arrow action, giant crossbows, catapults, giant scythe blades, an Attack on Titan-esque division of all female soldiers. It’s not perfect, it’s not wow-worthy, but for whatever may be bland about it, it isn’t bad by any means. It’s fun.

As a fantasy aficionado, it is a nice change of pace to see it (in a big screen Hollywood way) set in something other than medieval Europe. Yes, that’s been done before but seeing the Nameless Order (the army charged with defending against the Tao Ties ((the aforementioned aliens))) in their colorful costumes, lined up for battle along the Great Wall just brought a smile to my face. While I feel those Tao Ties are revealed too early and never really developed further (a complaint that could be leveled at a lot of this movie) they are fine as the menace, even if their eventual demise is standard action movie ‘mothership hivebrain’ thing. (seriously Hollywood, get some newish ideas).

All in all, The Great Wall is an okay movie at best. The more I think about it, the more I realize how generic it is, but that doesn’t change that I had a grin on my face throughout.  Bland yes, but with enough fun in it to woo simpletons like me or anyone hard up for more fantasy with their popcorn (also like me).