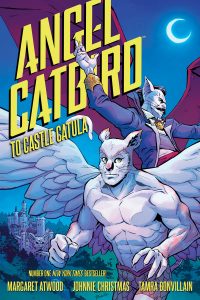 After my mild reaction to Volume One of Angel Catbird you might be surprised to hear that I actually loved Volume Two. The return of our favorite half-man. half-bird, half-cat superhero was surprisingly welcome.

After the stressful start of 2017, excessive puns and some catharsis and escapism are exactly what I need to feel better. Besides, as Count Catula quotes from the father of Romanticism, William Blake, “The road of excess leads to the palace of wisdom.” Of course, Catula’s talking about his large amount of wives, and I’m talking about puns.

Volume two starts up almost immediately where volume one left off. The gang is making the trek to the Count’s castle, and on the way they run into a whole new host of characters. Ray manages to bring back some of the other half-cats that were at Cataclysm, including the mummied cat, who we learn is actually the ancient Egyptian queen Nefertiti aka Neferkitty.

Strig also runs into a little bit of a love triangle when he happens upon Atheen-Owl, a half-owl descendant of Athena who is keen on hooking up with our hero for some sweet loving. I suspect this is probably more attention than Strig is used to, and when Cate catches the two of them kissing, he seems to be at a complete loss of what to do, hilariously asking himself, “What next? Maybe I love them both!” while the two fight over him.

Although it’s definitely the quintessential cat fight, the two ladies agree to set aside their quarrels when they bring up the issue with Muroid. It’s kind of a great scene. The characters reacted as expected, but she Cate and Atheen-Owl didn’t whine and stubbornly refuse to put aside their squabble for the greater good.

So Atheen-Owl flies off to gather her peeps to fight Muroid as the gang continues through the woods. Along the way they come across a little orphan kitty who has been abandoned by some cat owners that were careless enough not to get their cat spayed and then heartless enough to just toss the litter to the side. It’s one of the more depressing windows into the real world through this colorful story of half-animal vigilantes. Babushkat decides to adopt the kitten, who they name Fog, after Carl Sandburg’s famous poem, in a surprising twist of a non-punning name. Then again, Fog’s backstory definitely earned him a more serious name.

The gang arrives at Catula’s castle and it’s a pile of rubble. Only after a wave of his hand is the castle revealed. It’s as excessive and opulent as you can imagine and the gang find a place to rest their heads for the night — on catnip pillows!

Muroid, meanwhile, is in his sewer lab creating a weapon of cat destruction, a massive cat toy that also shoots lasers. He’s got one aim, and that’s to get Strig and get that gene-splicing data so that he can… create rat wives. Yeah, it had a potential to be cute, but he’s gross and rapey and in the end even his rats conspire against him. It’s another surprising twist, not all the rats are on Muroid’s side. In fact the does that he has caged are as eager to see Muroid defeated as our cat heroes. They hatch a plan and escape after Strig gets captured by the DRAT — the massive killer cat toy named drone rat — and are taken by Ray to the gang.

With the rat informants, Cate, Atheen-Owl, and Neferkitty are ready for a fight to take down Muroid and get back Strig. Aw yeah!

Volume two definitely drew me in. From Catula’s hilarious backstory (especially poor Dracula who had to turn to rats after running dry of his supply of local maidens) to the introduction of Fog and Atheen-Owl, the colorful and fantastical mythology of the world was fleshed out and given more life. It’s light where it needs to be, but doesn’t shy away from anything.

If you liked volume one, there’s no question for you about picking up volume two. But if you were a little apprehensive after volume one, volume two is a pleasant and rewarding surprise that will be sure to knock your socks off.

A REVIEW COPY OF ANGEL CATBIRD VOL. 2 WAS PROVIDED BY THE PUBLISHER IN EXCHANGE FOR A FAIR AND HONEST REVIEW. NERDOPHILES WAS IN NO WAY COMPENSATED FOR THIS REVIEW. OUR OPINIONS ARE OURS AND OURS ALONE.