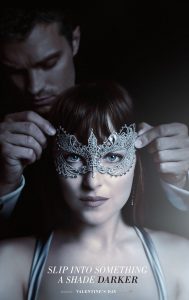 This was legitimately the most bizarre mainstream film I have ever seen in theaters. I can’t even decide if I liked it, let alone what to rate it. I just know that I sat in a room with at least 50 other strangers who simultaneously watched Dakota Johnson get eaten out on three separate occasions. And I think that’s beautiful. #feminism #equality

Here’s what I do know: I was consistently entertained. Sure, sometimes I was entertained by how laughably bad and unrealistic the movie was **RANDOM HELICOPTER CRASH SUBPLOT, ANYONE???** but I was also enthralled by the sheer creepiness of Ana and Christian’s relationship. And when those laughably bad or magnetically dramatic moments didn’t work for me, the dialogue had plenty of campy, fun moments to make up the difference. Also, the soundtrack was amazing.

Seriously. The sound editors deserve all the Oscars for strategically synchronizing all the original music to the sex scenes. It made me like that horrible Taylor Swift/Zayn song they’ve been pushing on the radio. All we really needed was to pump the bass and give it a sick beat, yo (Trademark, Taylor Allison Swift).

But back to the main dilemma of this series. Is it a romance? Is it an anti-romance? Part of the appeal of 50 Shades is that it’s bringing the romance genre mainstream – it’s tapping into this niche, taboo network and bringing it out into the light. The only problem is that it’s arguably not the best poster child for bringing an underground romance market into the public eye.

The source material is riddled with problems, the least of which is the overuse of the phrase ‘inner goddess.’ Then again, 50 Shades has plenty of opportunities to be subversive, to disrupt the traditional romantic movie, and it has a built in audience that’s more than willing to allow it to take those chances without jeopardizing its possibility of commercial success.

50 Shades has a loyal audience, so it can afford to take some risks. Unfortunately, it doesn’t take the right risks.

Sure, the movie is a lot sexier (literally!) than the first film – there’s about 4 or 5 sex scenes with full nudity compared to the relatively vanilla singular sex scene in the first movie. But while the movie takes a risk on nudity, it doesn’t take a risk on plot, or rather, on its lack of plot.

There are so many opportunities for this movie to be deeper http://premier-pharmacy.com/product/inderal/ than it is, to explore the themes of trauma and abuse, but it never does. Ana and Christian’s relationship is so deeply disturbing and controlling that the filmmakers never can quite manage to normalize their dynamic and sell the audience on their romance.

I’ve never rooted for Christian Grey. He’s the perfect anti hero, but the movie never quite gets us there. Instead, it paints caricatures of other conventional characters, the grope-y boss and the jealous ex-girlfriend, who only exist to give this movie some semblance of conflict other than Ana and Christian’s fucked up relationship. We get it. We’re supposed to hate these characters, but me hating them don’t make me dislike Christian any less in comparison.

Christian is not the hero. He abuses Ana. Emotionally, physically, and financially, and the filmmakers try to make it look cute. The fact that they don’t succeed is either a brilliant storytelling move, because it puts the audience in a constant state of uneasiness and paints the story realistically from the victim’s point of view, a victim who wants to get swept up in the romance and believe the best of her romantic partner at her own expense, or just a mark of a sloppy, ineffective, exploitative film.

I’m inclined to think that it’s a little of both. It’s clear that everything in this film was constructed very carefully, but just missed the mark on execution. That’s partially what made the movie so magnetic. It was gorgeous and well written, but feels a little hollow – its campy dialogue masks the lack of true romance or feeling. It doesn’t take itself too seriously, so we can’t take its themes too seriously either.

At the end of the day, Darker was either a really smart, subversive story about domestic abuse or a trite stab at a new kind of exploitative romantic consumerism. It straddles the line in a very unclear way, and because I couldn’t tell which way it landed, I have to assume that it’s the latter because they didn’t go far enough to sell me on the former. But it made me wax poetic for about 800 words, so either I’m interpreting something that’s not there, or there is some glimmer of the real darkness to 50 Shades Darker.

Final Thoughts: At the end of the day, this was a bizarrely entertaining film that really just consisted of a few ‘steamy’ sex scenes stitched together with random stalker/horror/adventure plots with a killer backing soundtrack. It was weird, y’all.