Assassin’s Creed: Uprising #1 is Action Packed from the Start 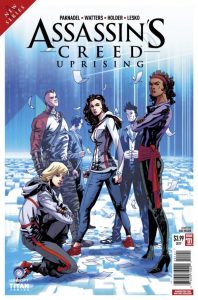 This series is definitely written for those who have been reading the other Assassin’s Creed comic titles while also playing the games. It merges characters from both Assassin and Templar comics into one interwoven story-arc. Theoretically, this is also the conclusion of the Phoenix Project storyline that permeated the game Assassin’s Creed: Unity, meaning that it is best understood in the context of the current timeline of that game in particular.

The comic takes place in modern day, switching between factions of Assassins and Templars. If you have not been keeping up with the comics, these transitions can seem confusing, blurring the lines between the two groups, especially as there seems to be infighting and sabotage on both sides.

The issue focuses, from the opening, on Charlotte de la Cruz – a young, recent Assassin initiate – and Juhani Otso Berg, who has taken up the mantle of The Black Cross to bring order to Templars.

Charlotte, during a routine raid of a former Templar space, is attacked by a group marked by the Assassin iconography, leading her to believe that perhaps they have a break-off faction to deal with. She barely escapes along side Guernica, a tech assistant on the team, relaying to the team in London that she encountered a highly trained team including a boy who calmly said, “Oh. It’s you. Hello again.”

When Juhani Otso Berg arrives on the scene after the fact, he is drawn to a similar conclusion, that the fight seems to have occurred between Assassins, rather than Assassins and Templars. Donning his Black Cross attire, he launches from the building to investigate. Investigating without the prying eyes of Abstergo, he reviews the scene, which shows Assassin fighting technique, but with Abstergo tech. Perhaps the Assassins that attacked are in fact a faction combined with rogue Templars. The Black Cross will root them out…

While this issue did not give away much in regards to the overall story arc and endgame, it is an intriguing entry into the AC universe. It seems likely that it will be a slow burn series, building towards the reveals about Abstergo, the Phoenix Project, Assassins, and what may be the future of the AC universe.

For fans of the comics and games, this will be an enjoyable read, leaving you awaiting the next entry to find out in what kind of situation could Assassins and Templars have actually joined teams? And for me, this series already has me doubting myself as I’m intrigued and drawn to the character of the Black Cross. Can I actually root for a Templar?

Pick up Assassin’s Creed Uprising #1 at your local comics shop or wherever you get your comics today!