“Split” Will Divide Audiences and Ultimately May Disappoint 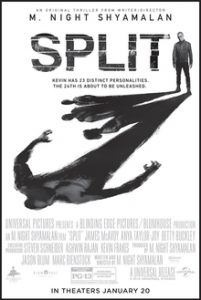 M. Night is back with his latest feature but does it redeem him, bring him fully back from the brink his career seemed to be constantly poised over for the past 10 years? Split tells the story of several girls who find themselves kidnapped and the man and (many) personalities who are doing their damnedest to keep them locked away, until ‘The Beast’ gets there.

Honestly, it is hard to get the enthusiasm up for this one. It starts promising, and continues on with some interesting ideas but at every moment the film zigs when it should have zagged.

The movie has a tense vibe throughout, no doubt about that but that is broken up by overly written exposition dumps between McAvoys character and his therapist (or just his therapist) in which the movie tells everything that it possibly can so when the movie closes, anything fantastical that occurs is somehow ‘setup’ earlier.

It really is the most overwritten film I have seen in a long while. Every scene goes a bit too far, every interaction reveals too much. Compare Shyamalan’s first film The Sixth Sense with this. The Sixth Sense worked because it revealed so little to us. It relied on the audience filling in gaps of story, gaps of information to come to our own conclusions and by letting us build, it was able to knock all of them down.

Split instead tells us everything there is to know about our villain, the main characters story being a ham-fisted and off-putting attempt at development. Let me just say it. It is really hard to swing a B story about child molestation right. It is a super specific, uncomfortable scenario and to handle it you had better be damn sure you know what you’re doing. M. Night is not the guy for it. It is cliched, and rather unnecessary.

The end goal of that backstory was to show the character was traumatized only to explain a later thing. The trauma could have been any other kind and it would have made the same amount of sense. To me that means it probably should have been written up better or done away with.

It also has this weird side effect of suggesting that a victim’s trauma is what defines them, or at the very least is their most specific quality. I will readily admit I am ignorant as all get out on most things, but that doesn’t sit well with me.

Finally, the good. James McAvoy really goes for it. I mean he goes all out in his various portrayals of these identities and for the great majority of it, crushes it. One personality, that of a 9 year old boy, does at first give unease but it works well enough by the end.

He does a fantastic job and the movie really hinges on his ability to do so. Anya Taylor-Joy, well she didn’t really have much else to do. No one did really. I hope she continues to get more work because she was great in my absolute favorite movie of last year (The VVItch, now THAT is a movie!)

All in all, Split is an okay film. More than bad, it is just disappointing.  If you’re a big M. Night fan, I’m sure you’ll see it and this seems to be on a fine line of love it or hate it. You’ll think he’s finally back (no doubt because of an unnecessary, and in my opinion bad, final scene) or that there is no redeeming him.