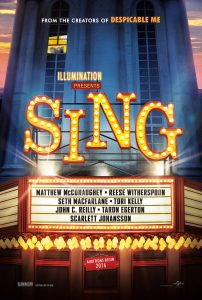 Man, must be musical season huh? Here’s the latest directorial (and writing) effort from Garth Jennings, the man who brought us the 2005 adaption of Hitchhiker’s Guide to the Galaxy. How does Illumination’s newest project stack to their others? Will this topple the Minion craze that has swept back and forth across the nation, leaving elementary schools in shambles as the child populace foams at the mouth screaming some variation of ‘Banana!’ Well, honestly, probably not. Kids are kinda dumb, there’s no telling what lands with them, but Sing has the makings of something good.

Sing tells the tale of one Buster Moon, a showbiz koala who owns a theater and his floundering attempts to keep it afloat, but more importantly producing that most hallowed art of which he so loves. In his attempts to pay off all his bills and keep the art alive, Buster sets up a singing competition and through a series of mishaps finds himself with damn near all of Animal LA at his doorstep, hoping to fulfill their musical dreams.

The movie plays out as you’d expect, with the cast overcoming their various fears through friendship and lots of cooperative dream following. Everyone is on the path to their passion of singing and escaping their dreary day to day.

Reese Witherspoon plays Rosita, a mama pig with 25 runts running around who fell into the stay at home mom gig. Seth MacFarlane is Mike, essentially Frank Sinatra the mouse. Scarlett Johansson plays Ash, one half of a porcupine punk duo who wants to writer her own music. Taron Egerton is a gorilla kid who doesn’t wanna disappoint his dear gorilla dad with his singing ambitions.

Anyways, they each have their hurdles and it is through their experiences with like minded dreamers that they are able to overcome them. Except for Mike. Mike sucks.

The song list is great and will leave you wishing the whole movie was just animals singing. The opening auditions are filled with fun creatures singing fun songs and fun goofs. This movie is for kids don’t forget, so there is of course a solid, solid buffalo fart joke that had the audience of my theater RIP ROARING in laughter. For some of these kids it was like the invention of humor itself. That moment hit and their eyes lit up with possibilities. Honestly, it’s pretty damn fun to hear that experience.

The thing I dug the most about this flick over other similar films, and there are many animal singing movies, is the lesson of the flick. That the goal isn’t to get famous, or rich, or whatever. It’s to pursue what you love no matter, what and that in itself is the reward. With passion and some help from like minded folks, you can put on your talent show and follow your bliss.

The other moral lesson, delivered from Buster Moon to Meena the Elephant (played by Tori Kelly) is to just do whatever it is you’re afraid to do. And as soon as you start, you’ll no longer be afraid. If you want to sing but are scared to, just start and you won’t be scared anymore. Simple, sure, but for a kids movie its a good one.

Some gripes. Meena the shy elephant goes to her audition and a Sia song gets cued up, and boy howdy was I excited. It fit so well! But then the fear took over and she wasn’t able to sing. Heart breaking but surely she’d get around to hitting that choice of hers later… Right? NOPE. Never again! And that’s it. That’s my complaint. They didn’t play a Sia song that would have fit really well. I am a really difficult man to please, clearly.

Sing  is in theaters now and it is just a delightful, pleasing movie.