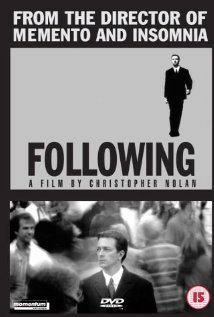 “The following is my explanation…well, my…my account of…well, what happened.”

The first spoken line of Nolan’s first feature film contains the very obvious pun and title drop. There is no doubt that trickery is at work in this tautly written and filmed guerilla neonoir set in London. Produced on Nolan’s own budget of about $6,000 and acted by a non-professional cast of his friends from University College London, Following offered a blueprint of the English director’s chief thematic predilections: duality, physical versus psychological identity, duplicity, delusion, non-linear presentation, and characters that cling obsessively to the romanticized narratives they willingly inhabit.

The protagonist is a greasy-haired, unemployed writer who calls himself Bill (Jeremy Theobald). Well into his late twenties and still living in post-university squalor, Bill is bored, uninspired, and disappointed in his mundane, empty life. In the post-credits and Nolan’s script, he doesn’t even have a name—he’s just “The Young Man.”

So “Bill” begins following random strangers on the street, initially to relieve his boredom and to collect material for the novels that are stuck in his head. Soon, this voyeurism grows into an obsessive hobby: “How can I explain? Your eyes pass over the crowd. And if you let them settle on a person, then that person becomes an individual. Just like that. It just became… irresistible.”

Bill’s stalking takes a turn when he is caught by one of his marks at a coffee shop: Cobb, a cat burglar with slick clothes and urbane diction played with charismatic verve by Alex Haw. In a most amusing confrontation (Bill: “I thought you looked interesting.” Cobb: “What, are you a faggot?”) Cobb seduces Bill into becoming his sort of brotherly apprentice.

Cobb’s brand of thievery is equal parts human anthropology and studies of mise-en-scène; it’s quite compelling to a would-be writer like Bill. Claiming that he doesn’t do it for the money, Cobb rifles through his marks’ secret shoeboxes and lingerie drawers. Whilst pocketing CDs to fence for money and brassieres to sniff, he astutely postulates the lives their marks might’ve led. During Bill’s first break-in, Cobb mischievously plants a pair of panties from a prior job into a couple’s laundry bag to give them something to chat about later.

“You take it away,” he evangelizes to a distraught Bill. “And show them what they had.”

When Cobb instructs Bill to choose their next mark, Bill picks out his own one-room flat under the pretense that a banker lived there. It is here that we get a sense of Bill’s own self-dissatisfaction and his relatable need for validation. He is a man seeking to inhabit notions of romantic anti-heroism, albeit pathetically; we get a sense from the Batman symbol on his door that he might want to be a character out of a noir yarn. But according to Cobb, who immediately deduces that the flat’s occupant is actually unemployed and pretty much a loser, the poor bugger has nothing even worth stealing or talking about. It’s a huge blow to Bill that gets him even more desperate to trade in his blank archetype for a saucier role.

With Cobb’s encouragement, Bill eventually attempts his own independent operation, copying Cobb’s exact style and modus operandi down to the professional way he dresses and wears his hair; this, of course, has many dire consequences later for the blissfully ignorant protagonist.

Bill’s maiden burglary goes terribly wrong. Cobb has a darker past that Bill’s failed to consider. A blond femme fatale (Cobb’s girlfriend) plays the victim and lover to Bill, only to screw him over. By the end of the film, Bill has inherited all the trappings of Cobb’s identity, from his roguish confidence to the entire load of his sins, and is indicted for crimes infinitely more heinous than character study. Innocence and freedom was what Bill had taken for granted, until Cobb, thief of a thousand faces, took it away. This is probably why Nolan ultimately framed the narrative as Bill’s confession to a policeman: to show Bill, and the audience, what he had.

Following, above all of its indie cult virtues, showcases Nolan’s fascination with temporally convoluting deceptively simplistic plots—a technique that he would sustain in lengthier works Memento and The Prestige. On first viewing, it seems as if he’s folding the story’s timeline and Freytag’s pyramid into origami-like figures, demanding a fiendish amount of attention and detective-work from the audience. “My most useful definition of narrative,” Nolan has said, “is that it’s a controlled release of information. You don’t feel any obligation to release that information on a chronological basis. What’s interesting about doing this is trying to expand the story in all directions.” Though he prefers tales of delusion and escape, Nolan’s not known for coddling the intellect with his movies.

Final Thoughts: The movie is an interesting, anthropological watch for Nolan fans; the percussive soundtrack, and the anachronistic black-and-white cinematography coupled with smart repartee readily invokes Hitchcock, who was an influence; and to think that it was achieved with a single 16mm camera Nolan would rent from UCL, and a schedule of shooting only on weekends over a four-month period. Following offers a view of Nolan’s immense potential (he was twenty seven when the film was made) and a pivotal turning point that caught Hollywood’s attention.