Prepare Yourself! ‘Fear The Walking Dead’ Season 2 is out on Blu-Ray, DVD, and Digital HD today! 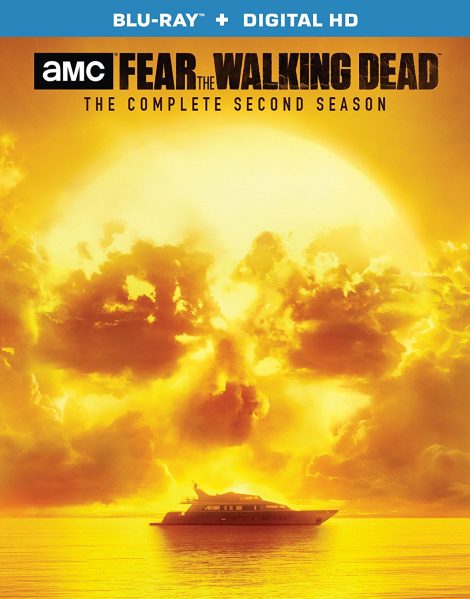 Thumbing its nose at everyone who has ever asked, “Why don’t they just get on a boat and float away from all of the walkers?” about The Walking Dead, the characters of Fear The Walking Dead spend the first half of the season illustrating why that might be a terrible idea.

The second season is another opportunity for the characters to learn what this new world entails and Strand is the first one to ruthlessly deny helpless boaters and people on the radio signalling for help. After learning that their original destination, San Diego, has been overrun, they make a pitstop to learn about the horrors that some survivors are willing to go to now that the world as they know it is ending.

Bringing in Alex from the Flight 462 miniseries momentarily she is there and gone in an episode when no one can find it in themselves to trust each other – especially when the plan shifts from San Diego to Baja on Strand’s command. Alicia’s radio dates soon threaten everyone’s safety when The Abigail is attacked by the group she’d been speaking to.

She and Travis are briefly separated from the group and it’s eventually revealed that Alex was the real one to put them all in danger in retribution for being left behind. A rescue mission again delays their travel and they’re only a week and a half into the fall of society at this point.

It’s not long after that they make it to Baja and Strand’s boyfriend, Thomas Abigail, where they are all at the home of his mother, Celia Abigail. Things briefly look up, but tension and strife continue as many people are suspicious of Celia and Thomas dies from a bite. In the chaos that ensues from the various power struggles, the group is splintered as Celia’s house burns down – with both Celia and Daniel inside.

Nick finds a new group of people to join up with while Madison, Alicia, Ofelia, and Strand find a hotel that looks promising. They work with the people already there to clear the hotel and make something of a stronghold. Travis had to go after Chris, who was also struggling with this new reality, and ultimately fails to get him to rejoin with the family and the group.

When Madison realizes that Nick is out there somewhere, she puts the entire operation at risk by turning on the generator and lights at night to get his attention. Instead, it brings Travis and a host of survivors to their doorstep – who learns that the boys he left Travis with killed him after a car crash. He proceeds to beat them both to death, causing the death of another hotel guest in the process, and forcing them to leave the hotel.

Only Strand stays behind as Madison and the rest of her group find the Colonia Nick was staying at, giving them a direction to follow in order to be re-united with him. As he crosses the border with Luciana and the rest of the Colonia members, they’re set upon by men with guns – possibly the same ones that stopped Ofelia when she earlier crossed the border on her own.

It’s always difficult to keep in mind that the concept of “zombie” just doesn’t exist in the world of Fear The Walking Dead, meaning the cluelessness and fumbling actions of the characters persist through the second season as they learn how to adapt and who they can trust in this new world.

The first special feature offered is the ever-beloved Deleted Scenes. A simple black title card with white text gives the context for which episode it belonged in. These scenes are a few minutes in length at most, but span almost all of the characters. So if there was someone you were hoping to see more of (Daniel!), these deleted scenes are a treat.

One of my favorite scenes has been released by Anchor Bay on their Youtube channel. You can watch Alicia confronting Alex about tipping off the pirates to The Abigail and leading to her capture right now. There are eight deleted scenes in total and they go in order of the episodes for the season, so fans get an idea of where that deleted scene might have fallen if it’d been kept.

Flight 462, the webseries that played out during commercials while The Walking Dead season six aired, is collected in one place for the blu-ray release and allows for easy watching. It is awesome to revisit now that we know which character crossed over into the show in season two.

The Q&A with Cast and Creative Team from Paleyfest LA 2016 is an hour-long conversation that sounds like exactly what kind of feature it is. For anyone who might not have Hulu or who wasn’t able to make it to Paleyfest to watch it live, this is a great addition to the blu-ray and I hope it means they’ll consider comic convention panels for future blu-ray releases.

Broken down by episode, Inside Fear the Walking Dead provides commentary from the cast and crew regarding each specific episode. It includes insight from the actors as to how their characters are feeling and handling the situations in each episode. These are the same segments that are available on the AMC website, but it’s convenient to have them all in one place.

The Making of Fear the Walking Dead goes one step further in exploring each episode by showcasing the special and practical effects that went into the show. Also available on the AMC website for the show, it is an interesting watch for anyone who hasn’t yet seen the short segments. The first episode, for example, walks through how the zombie kill of the week – propeller to the face – had the make-up applied to make it such a realistic and gruesome amateur kill.

There are easily a few hours of bonus content included in the blu-ray release to enjoy, though the deleted scenes are the only real exclusive content. Everything else included is just made more easily accessible than it was – which isn’t a bad thing! Except for Flight 462, which I watched along live, everything else was new to me and I appreciated the efforts to put it all together for audiences.

Can we take a moment to talk about the cover? I’m a sucker for a well-designed cover and the boat and clouds combined to make a subtle skull is gorgeous. The blu-ray release comes with an embossed sleeve of the same image that adds that little bit of texture when you’re holding the physical copy.

You get a slightly ridiculous number of discs (five!) in the blu-ray release, with each disc holding three to four episodes of the 15 episode season, but skip right to disc 5 for all of the bonus content. If nothing else, the amount of discs gives the opportunity to include almost all of the characters on the discs – even Griselda appears faded on a disc with Daniel Salazar.

A REVIEW COPY OF FEAR THE WALKING DEAD SEASON TWO ON BLU-RAY COMBO WAS PROVIDED BY ANCHOR BAY ENTERTAINMENT IN EXCHANGE FOR A FAIR AND HONEST REVIEW. NERDOPHILES WAS IN NO WAY COMPENSATED FOR THIS REVIEW. OUR OPINIONS ARE OURS AND OURS ALONE.