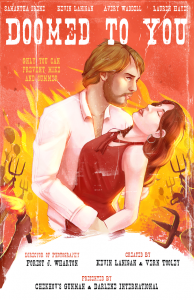 Full disclosure before we start: Kevin is a former staff writer at Nerdophiles – I loved his wit and commentary for The Flash when he wrote for the site, so I’m really looking forward to his new webseries Doomed to You.

Doomed To You is the latest installment in a migration toward anti-romcom/non-traditional rom-com storylines a la 500 Days of Summer. From the trailer below, Doomed To You looks a lot like the premise of FX’s You’re the Worst, which follows two irrevocably broken, selfish people (one of whom also happens to be a red-head!) through their flawed relationship which starts at a friend’s wedding.

Unlike YTW, Doomed To You looks at the relationship between two awful people as a post-mortem. We meet the characters on the day they decide to end their relationship; coincidentally, on the same day as their friends’ engagement party. Check out the trailer:

All episodes of Doomed To You will be released on Youtube on Friday, December 9th for Netflix-style bingeing.

One thought on “Webseries Discovery: Doomed To You [Coming Dec. 9th!]”